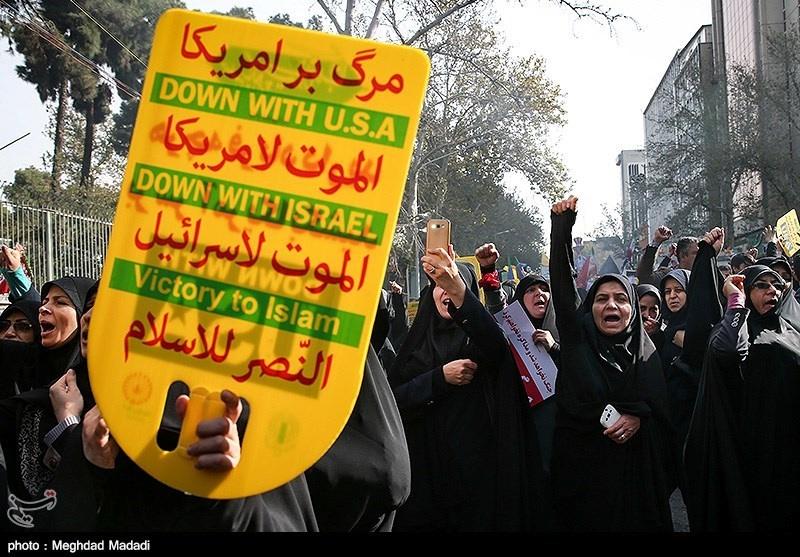 Iranians celebrate the anniversary of the takeover of the US Embassy in Tehran following the Islamic Revolution in 1979. And also protest on the eve of U.S. sanctions against the Iranian government.

WASHINGTON/DUBAI (Reuters) – The United States imposed strict sanctions* on Iran on Monday and threatened more action to stop Tehran from pursuing “outlaw” policies, steps the Islamic Republic condemned as economic warfare and vowed to defy. [*sanctions are actions that are taken to force a country to obey international laws by limiting or stopping trade with that country, by not allowing economic aid for that country, etc.]

The measures are part of a wider effort by U.S. President Donald Trump to curb Tehran’s missile and nuclear programs and diminish the Islamic Republic’s destabilizing influence in the Middle East.

“Our ultimate aim is to compel Iran to permanently abandon its well-documented outlaw activities and behave as a normal country, or it can see its economy crumble,” Secretary of State Mike Pompeo told reporters. The sanctions are “aimed at depriving the regime of the revenues that it uses to spread death and destruction around the world,” Pompeo said.

“We hope a new agreement with Iran is possible,” he added. “Rest assured, Iran will never come close to getting a nuclear weapon on President Trump’s watch.”

The move restores, and strengthens, sanctions lifted following President Obama’s 2015 Iran nuke deal, from which the Trump administration withdrew in May. [President Obama’s 2015 deal with Iran required the government to limit enrichment of uranium – which can be used for nuclear fuel or for building nuclear weapons. In exchange, most international sanctions against Iran, which were greatly hurting the Iranian economy, were removed.

Although a majority of Americans opposed the deal with Iran, President Obama bypassed Congress and signed an executive order in January 2016 which ended the 20-years of sanctions against Iran for pursuing a nuclear weapons program. Then, in August 2016, the Obama administration secretly arranged a delivery of $400 million in cash to Iran on an unmarked plane on the same day Iran released four American hostages.]

In a statement on Monday, U.S. Treasury Secretary Steven Mnuchin said the move “should make clear to the Iranian regime that they will face mounting financial isolation and economic stagnation until they fundamentally change their destabilizing behavior.”

The sanctions cover 50 Iranian banks and subsidiaries, more than 200 persons and vessels in its shipping sector, and targets Tehran’s national airline, Iran Air, and more than 65 of its aircraft, the statement said.

In reaction, a senior Iranian official who declined to be identified said Tehran was not concerned about the sanctions and will not yield to pressure to change its policies. … Women hold signs reading ‘Down With USA’ in Tehran during a demonstration on the anniversary of the US embassy seizure. (Ali Mohammadi/Bloomberg News.)

European powers which continue to back the nuclear deal said they opposed the reapplication of sanctions and major oil buyer China said it regretted the move.

The move intensifies a campaign by President Trump to force Iran to further limit its program to build nuclear weapons and halt a missile program, as well as end its support for proxy rebel and/or terrorist forces in Yemen, Syria, Lebanon and other parts of the Middle East.  …..

Trump announced in May his government was withdrawing from what he called the “worst ever” agreement negotiated by the United States. The other parties to the deal – Britain, France, Germany, China and Russia – say they will not leave. …

In Jerusalem, Israeli Prime Minister Benjamin Netanyahu hailed what he called Trump’s courageous decision in reimposing the sanctions on Iran, an arch-foe of Israel.  …..

The curbs come as the United States is focused on U.S. congressional and gubernatorial elections on Tuesday. Campaigning in Chattanooga, Tennessee, on Sunday, Trump said his “maximum pressure” against Iran was working.

“Iran is a much different country than it was when I took office,” said Trump, adding: “They wanted to take over the whole Middle East. Right now they just want to survive.”

To keep the deal alive, the remaining parties to the Iran accord are trying to maintain trade with Tehran, despite scepticism that this is possible.

[President Obama and the leaders of Russia, China, Germany, Britain and France (the other signatories to the 2015 nuclear pact), claimed it was the best way to prevent Iran from developing nuclear bomb capability. Iran has repeatedly claimed its ballistic missile program has nothing to do with its nuclear weapons and is non-negotiable.

The Iranian government has called for the destruction of Israel on numerous occasions. It is believed that once obtained, Iran would use nuclear weapons against Israel, a fellow United Nations member.]

Published at Reuters on November 5. Reprinted here for educational purposes only. May not be reproduced on other websites without permission from Thomson Reuters.

1. For the UNITED STATES, give the following information:

2. For the UNITED STATES:
a) list the who, what, where and when of the news item
b) What is the aim of the sanctions? What does the U.S. want Iran to do? Be specific.
c) President Obama and the leaders of Russia, China, Germany, Britain and France (the other signatories to the 2015 nuke deal), claimed ending sanctions was the best way to prevent Iran from developing nuclear bomb capability. Iran has repeatedly claimed its ballistic missile program has nothing to do with its nuclear weapons and is non-negotiable. An Iranian official said Tehran was not concerned about the sanctions and will not change its policies. Most news reports focus on “European powers [and China] which continue to back the nuclear deal said they opposed the reapplication of sanctions.” Watch the videos under “Resources.” How do Secretary Pompeo’s comments on this differ from what is mostly reported?
d) Ask a parent AND a grandparent: Do you support or oppose the Trump administration move to reinstate sanctions on Iran to force the regime to end its nuclear weapons pursuit? Please explain your answer.

Watch clips from foreign press briefing with Secretary of State Mike Pompeo and Secretary of the Treasury Steve Mnuchin (from c-span).