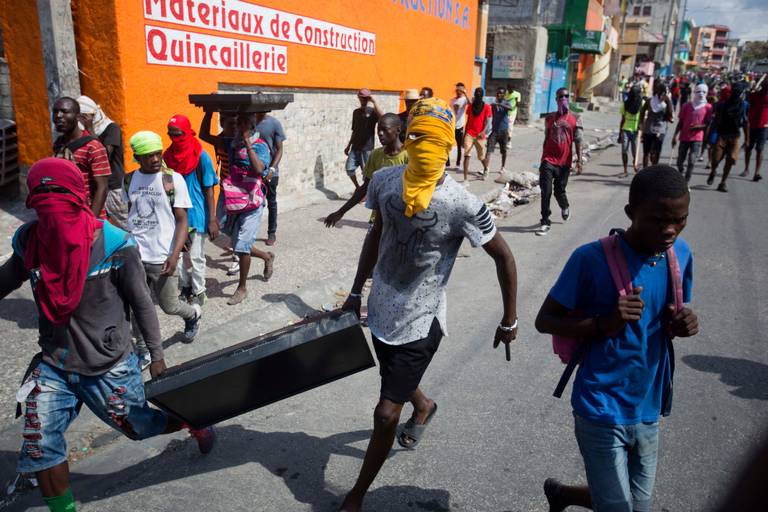 “Do not travel to Haiti due to crime and civil unrest,” the advisory said, adding “protests, tire burning and road blockages are frequent and unpredictable. Violent crime, such as armed robbery, is common.”

(by Jacqueline Charles and Franco Ordoñez, Miami Herald) – The Trump administration is working on a plan to provide a humanitarian aid package to Haiti, where water, medicine and food are becoming increasingly scarce after nine days of consecutive protests, the Miami Herald and McClatchy Washington Bureau have learned.

“While we cannot comment on internal planning processes, the U.S. government remains committed to the people of Haiti and to addressing the food security needs of the most affected people,” a U.S. Agency for International Development spokesperson said. “USAID-delivered emergency food assistance is intended to help alleviate severe food insecurity among the most vulnerable segments of the population.”

The decisions on when, where, and the type of emergency food assistance that will be provided will be based on local needs and context, including assessments of local market conditions to ensure the appropriate interventions are put in place, the spokesperson added.

On Thursday the U.S. State Department and Canadian government announced increased travel warnings for the country, advising citizens to avoid travel to Haiti due to the civil unrest that broke out on Feb. 7 and has left diplomats and Haitians holed up at home.

Since Feb. 7, Haiti has been engulfed in violent demonstrations by Haitians angry over the skyrocketing cost of living, double-digit inflation and a government that appears incapable of addressing its concerns. Amid the protests, staged by the opposition, there have been increased calls for the resignation of President Jovenel Moïse, who, [on Thursday] in his first address to the nation since the protests started, made it clear he had no intention of stepping down.

“We have had a lot of transition governments that have produced nothing but catastrophe and disorder, that did not serve the country well, a lot of blood that poured in vain; the State became weaker, the lives of people degraded daily. You want to do the same thing every time?” Moïse said. “ I want you to understand that you and I, our destinies are tied to each other. Open your eyes. I have the determination and courage to continue to work to change your living conditions.” The speech did not offer any solutions for tackling the economic concerns, including the government’s $89.6 million budget deficit, or address the corruption scandal around the Venezuela PetroCaribe discount oil program, which has also brought some people out into the streets. Soon after Moïse’s speech, both the U.S. State Department and Canada announced the travel warnings, with the State Department also saying it had ordered the evacuation of all non-emergency personnel and their families from the country.

The aid to Haiti from the United States reflects a cooling of tensions. Trump administration officials had been frustrated with Haiti’s absence on the Venezuela issue over the last year, but now that Haiti has adopted the position of the United States in recognizing acting president Juan Guaidó over leader Nicolás Maduro, relations have improved, with Haiti’s foreign minister making several requests for help in recent weeks.

In a statement, the U.S. Embassy in Port-au-Prince said Friday that it welcomes the president’s call for national dialogue. It noted that the protests had resulted in the deaths of innocent civilians, increased violence and suffering for the Haitian people

“We encourage all of Haiti’s lawfully elected representatives, and all Haitians who seek a peaceful political solution consistent with Haiti’s constitution, to engage in an inclusive dialogue — without resorting to violent action. We also encourage the full implementation of sound economic policy measures for the benefit of the Haitian people. Improved and transparent resource management will promote long-term economic growth, improve the investment climate and generate employment opportunities.”

The U.S. also urged the Moïse government to redouble its efforts in fighting corruption and in holding those implicated in the PetroCaribe scandal accountable.

Published at MiamiHerald .com on February 15 (updated Feb. 16). Reprinted here for educational purposes only. May not be reproduced on other websites without permission from the New York Post.

1. For HAITI, give the following information:

2. For HAITI:
a) list the who, what, where and when of the news item
b) What is the reason for the ongoing violent protests in Haiti?
c) What warnings have U.S. and Canadian authorities issued in the wake of the protests? What other steps did the U.S. take regarding the ongoing violence?
d) How will the U.S. determine type and amount of aid for Haiti?
e) The country of Haiti has received the most U.S. and foreign aid of any country over many years. The conditions of the people/economy/government never seem to improve. Ask a parent what they think might help Haiti the most.