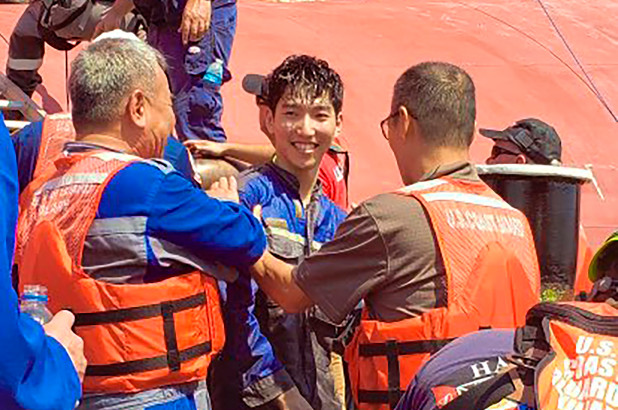 A crew member after being rescued from the capsized cargo ship Golden Ray.

(from CBS News) – The Coast Guard rescued all four trapped crew members from a capsized cargo ship Monday, finding them alive more than a day after the vessel overturned while leaving a port on the Georgia coast.

Captain John Reed said responders had plucked three South Korean crew members from a room in the hull near the ship’s propeller and later removed the last man, who was trapped behind glass in the ship’s engineering compartment. At least two of the men who were extracted from a hole drilled in the hull of the Golden Ray cargo ship were able to walk with assistance down to a waiting boat. All three were being examined by medical personnel.

The men were in relatively good condition for having spent over 30 hours trapped in the ship, Reed told reporters during a press conference. “They were subject to some pretty tough conditions over the last day and a half,” he said.

All crew members are accounted for, which means the Coast Guard will now shift its focus toward removing the ship with minimal environmental impact.

Rescue efforts had broken off Sunday after responders determined a fire aboard the ship made it too dangerous to go inside. They were also concerned about the stability of the ship, which was carrying 4,000 automobiles, some of which may have broken loose. 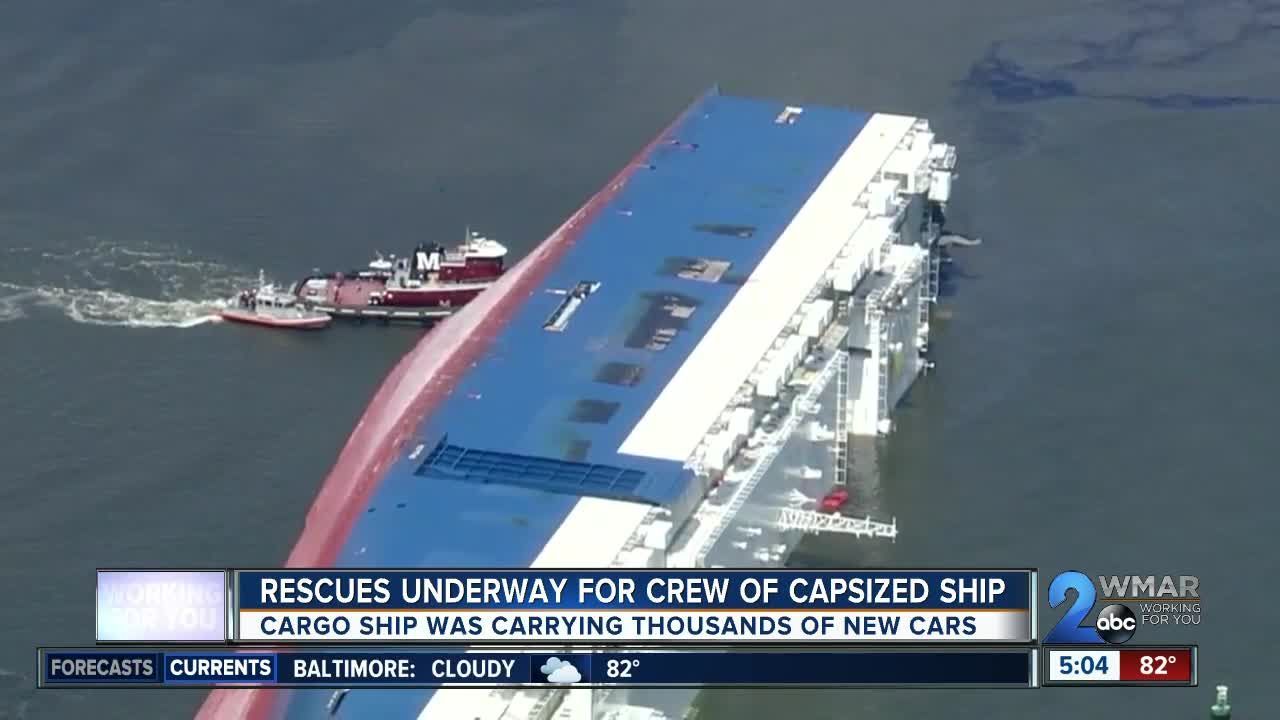 The flames were extinguished, but the huge ship was listing at nearly 90 degrees. Lieutenant Lloyd Heflin, who coordinated the rescue, had said there was an initial language barrier to communicating with the crew members about possible hazards; Reed later said the ship’s chief engineer was able to translate for rescuers.

Some rescuers worked from a tent set up on the deck of a tugboat off the ship’s stern, while smaller boats and helicopters buzzed around. Onshore, crowds gathered to watch the Coast Guard operation.

The 656-foot vehicle carrier was stuck in Georgia’s St. Simons Sound, closing one of the busiest U.S. seaports for shipping automobiles. A statement issued Monday by the South Korean foreign ministry said the crew members were isolated in an engine room.

It said 10 South Koreans and 13 Filipinos had been on board, along with a U.S. harbor pilot, when the ship began tilting. In the hours immediately following the accident, the Coast Guard lifted 20 crew members into helicopters before determining it too risky to venture further inside.

Position records for the Golden Ray show the ship arrived in port in Brunswick Saturday evening after making the short sail from a prior stop in Jacksonville, Florida. The ship then departed the dock in Brunswick shortly after midnight and was underway only 23 minutes before its movement stopped in the mouth of the harbor where it capsized, according to satellite data recorded by the ship-tracking website Marine Traffic.

The Coast Guard said it was notified of the capsized vessel by a 911 call at about 2 a.m. Sunday. The cause of the capsizing remains under investigation.

Marine Traffic shows the Golden Ray overturned as it was passed by another car carrier entering St. Simons Sound. At the time, the skies were clear and the weather calm, with a southerly breeze of only 5 mph, according to National Weather Service records.

Many of those rescued were taken to the International Seafarers’ Center in Brunswick. Sailors arrived with only what they were wearing when rescued.

A restaurant donated a meal and the volunteer-run center provided the seamen with clothes, toiletries and Bibles. A priest said Mass for the sailors Sunday afternoon before they were taken to a hotel.

“They were all in relatively good spirits,” said the center’s executive director, Vicki West. “We just do anything we can to be their little respite in the storm.”

The ship channel was closed to vessel traffic, with a safety zone of a half mile around the Golden Ray in the sound. The vessel is owned by Hyundai Glovis, which carries cars for automakers Hyundai and Kia as well as others.

Nearly 614,000 vehicles and heavy machinery units moved across Brunswick’s docks in the 2019 fiscal year that ended June 30, according to the Georgia Ports Authority.

From CBSNews .com. (First published on Sept. 9, 2019 at 11:18 a.m. ET. Updated 5:34 p.m. Reprinted here for educational purposes only.) May not be reproduced on other websites without permission from CBS News.

1. For U.S., give the following information:

2. For U.S.:
a) list the who, what, where and when of the news item
b) Twenty crew members were initially rescued. How long were the remaining four men trapped inside the capsized cargo ship before being rescued?
c) What were the weather conditions when the ship capsized?
d) What caused the ship to capsize?
e) How many cars was the Golden Ray cargo ship carrying?
f) Watch the video under “Resources.” What one word do you think probably best describes the last man’s feeling when he was rescued? Explain your answer.
Visit the Coast Guard’s twitter page.