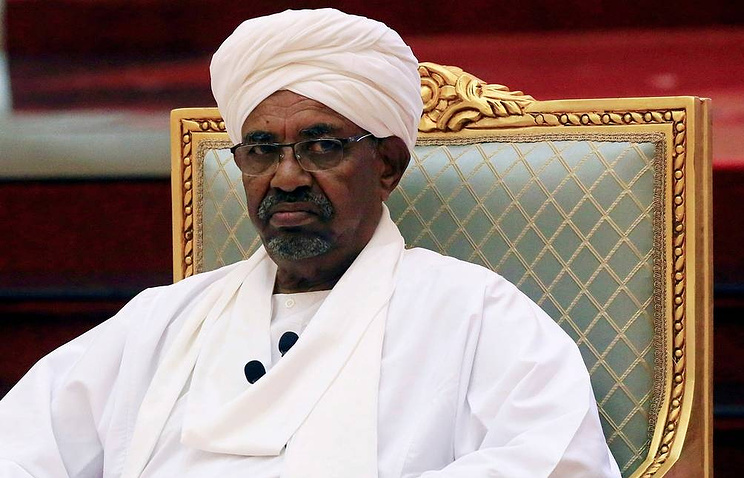 Omar al-Bashir was ousted as president of Sudan after ruling for 30 YEARS.

NOTE: Story is still developing…follow the news over the coming days/weeks…

(from BBC News) – Organizers of mass protests in Sudan have told the BBC they want the full dismantling of the “deep state” left behind by ousted leader Omar al-Bashir.

A spokesman said leaders of the past regime should be put on trial.

Mr. Bashir was toppled by the army last week after 30 years in power and a military council has pledged elections in two-years time.

But protesters remain camped outside army HQ in the capital, Khartoum, demanding a civilian administration.

Reports on Monday said there had been efforts to disperse the sit-in but protesters joined hands and troops stepped back from a confrontation.

The crowd chanted “Freedom” and “Revolution,” and appealed to soldiers to protect them, witnesses said.

The Sudanese Professionals’ Association (SPA) which has spearheaded the protests, urged supporters to foil any attempt to disperse the sit-in.

“We hope that everyone will head immediately to the areas of the sit-in to protect your revolution and your accomplishments,” it said in a statement.

On Sunday the transitional military council sought to appease protest leaders, telling them that key figures from the former government had been arrested. It is not clear who those officials are.

A military spokesman also promised not to disperse protesters and said the council was “ready to implement” whatever civilian government the opposition parties agreed.

He said demands included the “full dissolution of the deep state” and the dismantling of state intelligence agencies.

Opposition politician Mubarak al Fadil told the BBC that the role of the military should decrease over time.

In another development, 13 people were reportedly killed in an armed attack on protesters in the troubled region of South Darfur over the weekend.

“Gunmen” attacked the anti-government protest at a camp for displaced people about 10 miles east of the regional capital, Nyala, according to the privately owned Darfur 24 news website.

Mr. Bashir has been indicted on charges of war crimes and crimes against humanity in Darfur by the International Criminal Court. [He orchestrated the Darfur genocide beginning in 2003 in which 400,000 non-Arab Sudanese were killed and 3 million displaced.] He denies any wrongdoing.

Published at BBCNews .com on April 15. Reprinted here for educational purposes only. May not be reproduced on other websites without permission from BBC News.

1. For SUDAN, give the following information:

2. For SUDAN:
a) list the who, what, where and when of the news item
b) On what charges has the International Criminal Court indicted dictator al-Bashir?
c) When did the military say elections would take place?
d) Why are protesters, led by Sudanese Professionals’ Association, still protesting and staging sit-ins?
e) Read the “Background” below and watch the videos under “Resources.” This is an on-going news story. Follow the news for the latest.

South Africa’s Times Live reports: The beginning of the end for Bashir began last December when his government tripled the price of bread, sparking protests throughout the country. Demonstrations against the price hike continued into the new year and led to the Sudanese government clamping down on the protesters and killing dozens of people.

On February 22, Bashir declared a state of emergency and dissolved the government. By April thousands of protesters had set up camp outside the army headquarters in Khartoum, where they demanded that the military support the removal of Bashir.

Bashir’s ouster follows that of Algeria’s Abdelaziz Bouteflika, meaning two of the longest-serving leaders in the region have been toppled by protests in just over a week.

Per GZERO Media’s Alex Kliment: “Bashir first took power three decades ago in a coup backed by Islamic fundamentalists, and he immediately dialed up the Arab-dominated government’s long-running war against black and predominantly Christian separatists in Darfur, the country’s oil rich south.”

What has the military said? (from the BBC News report):

He also said the army would not remove protesters from their sit-in by force, but called on the crowds “to let normal life resume” and stop unauthorized roadblocks. “Taking up arms will not be tolerated,” he added.

The military council also announced a raft of decisions, including:

Watch an April 12 CBS News report: After 30 years of harsh rule, two months of massive street protests have ended the presidency of Omar al-Bashir in Sudan. His army placed him under arrest an seized power.

and a follow-up ITV News report: