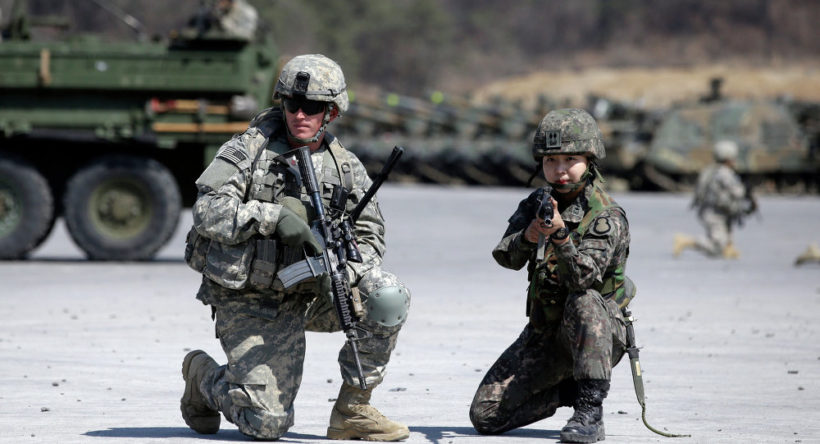 (Compiled by Arkansas Democrat-Gazette staff from wire reports) — South Korea and the United States struck a deal Sunday to increase Seoul’s contribution for the cost of the American military presence on its soil.

Under the agreement, South Korea will contribute about $924 million this year to help cover the expense of stationing 28,500 U.S. troops in the country. That is an 8.2 percent increase from last year, when South Korea paid about $850 million, or roughly 40 percent of the cost of the deployment.

The preliminary one-year deal, known as the Special Measures Agreement, replaces a five-year pact. President Donald Trump has insisted that South Korea and other allies shoulder more of the cost of maintaining U.S. bases on their soil.

The new deal is subject to parliamentary approval…but Foreign Minister Kang Kyung-wha expressed optimism that it would be passed. …

The agreement was signed in Seoul on Sunday by the chief South Korean negotiator, Chang Won-sam, and his American counterpart, Timothy Betts. The two sides held 10 rounds of negotiations last year, failing to reach agreement before the previous deal expired at the end of 2018.

Both sides agreed to set up a working group to handle cost-sharing negotiations in the future, adding that if no new agreement is reached by the end of this year, “to prevent the absence of an agreement, the two sides can extend the previous agreement upon mutual consent.”

The South Korean Foreign Ministry said in a statement that Washington had withdrawn its earlier demand that South Korea provide “operational support,” helping to pay the costs of the U.S. soldiers, aircraft carriers and warplanes used in joint military exercises with the South.

The statement also said the two countries reaffirmed the need for a “stable” U.S. military deployment amid the “rapidly changing situation on the Korean Peninsula,” and that the U.S. had stressed its commitment to the alliance and its current number of troops. …

During his election campaign, Mr. Trump suggested he could pull back troops from South Korea and Japan unless they took on a greater share of the financial burdens of supporting U.S. soldiers deployed there. But the president said in a Feb. 3 interview on CBS’ Face the Nation that he had no plans to withdraw troops from South Korea.

Conservative South Korean commentators have said it is worth paying more for U.S. troops to keep President Trump from withdrawing them. But progressives (liberals), including members of South Korean president Moon Jae-in’s governing party, [oppose paying more – some even opposing the presence of U.S. troops.]. …

Compiled by Arkansas Democrat-Gazette staff from wire reports on Feb. 11. Reprinted here for educational purposes only. May not be reproduced on other websites without permission. 2. For SOUTH KOREA:
a) list the who, what, where and when of the news item
b) How many U.S. troops are stationed in South Korea? For how many years have we had troops there? When did South Korea begin paying part of the cost?
c) Approximately what percent of the cost does South Korea pay for the U.S. military presence there?
d) Why has South Korea agreed to pay more for the U.S. military presence there?
e) Why is it in South Korea’s best interest to pay their fair share? (What is the purpose of our military presence there? – Why are we there?)
f) From “Background’: President Trump has frequently called on Washington’s allies to increase their military spending and earlier this month pointed out again that U.S. forces in South Korea were “very expensive.” He has insisted South Korea (and others) should pay more, noting that many have strong economies are are able to do so. He has questioned why American taxpayers should foot the bill for protecting other countries, while acknowledging it is also a benefit to the U.S.
Do you support President Trump’s efforts to get our allies to pay their fair share? Why or why not? – Explain your answer.

About 28,500 U.S. troops are stationed in South Korea, where the United States has maintained a military presence since the 1950-53 Korean War. The large U.S. military presence is a symbol of the countries’ alliance.

South Korea began paying for the U.S. military deployment in the early 1990s, after rebuilding its war-devastated economy (from the 1950-53 Korean War).

Last year, South Korea provided about $830 million, roughly 40 percent of the cost of the deployment of the U.S.troops, whose presence is meant to deter aggression from North Korea.

President Trump has frequently called on Washington’s allies to increase their military spending and earlier this month pointed out again that U.S. forces in South Korea were “very expensive.” He has insisted South Korea (and others) should pay more, noting that many have strong economies are are able to do so. He has questioned why American taxpayers should foot the bill for protecting other countries, while acknowledging it is also a benefit to the U.S.

South Korea’s foreign ministry welcomed the agreement in a statement, saying it has worked to produce a “win-win” deal with the U.S.

Seoul and Washington have maintained a military partnership since the end of World War II, mainly to deter North Korean aggression, while Pyongyang’s regime has cited the presence of U.S. troops in South Korea as a threat.

Mr. Trump, in a televised interview earlier this month, said he had no plans to reduce U.S. troops in South Korea. (compiled from reports at VOA, WSJ and NBC)