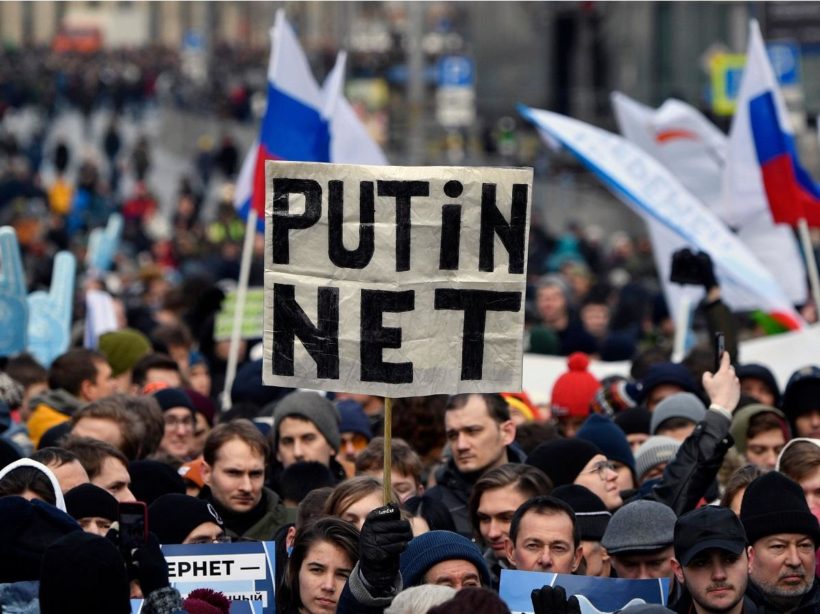 In March, thousands of people in Moscow and other Russian cities took to the streets to protest legislation they fear could lead to widespread internet censorship in the country.

(by Ian Randall, UK Daily Mail) – The Russian Government may begin tests of an internal version of the web — isolated from the networks of other nations — in November,  [according to a translated Russian report obtained by Defense One].

Such a setup is supposedly intended to shield critical Russian systems from cyber-attack, allowing the country to operate disconnected from the rest of the web.

However, critics have claimed that the tests are part of a wider attempt to isolate its citizens from the surrounding world and its influences.

This is not the first time Russia has claimed to be testing such a capacity, with a similar exercise announced in February that was scheduled for April, not having been undertaken.

According to Russian language D-Russia, (DefenseOne verified a translation with the help of a native Russian speaker) the tests of the network isolation will begin after November 1, 2019 and will be repeatedly at least annually.

“On Monday, the government approved the provision on conducting exercises to ensure the stable, safe and holistic functioning of the Internet and public communications networks in the Russian Federation,” D-Russia reported.  The exercises are [to be] held at the federal and regional levels.”

The Russian Government is believed to consider its present reliance on Western IT as a strategic vulnerability that could be exploited by other nations.

“The larger context is Russia’s dependence as a nation on imported/foreign hi-tech and the perceived vulnerabilities that Russia sees in such technology use,” Russian expert at the American Foreign Policy Council Samuel Bendett told Defense One.

“With so many government, public, and private-sector nodes using such foreign tech, the Russian government is seeking to impose a measure of control over how Internet communication over this technology is conducted.  In the event of what the government sees as outside influence affecting RuNet, the state can act — hence the annual exercise.”

“The Russian government, particularly since seeing the role social media played in the Arab Spring, has wanted over the last decade to exert tight control over the online information space within Russia’s borders.  Free information flows are a threat to regime stability, and they need to be controlled, the narrative goes.”

The move to isolate Russia’s internet infrastructure – ‘RuNet’ – has been accompanied by legislation to limit its citizens’ access to certain sites.

A 2006 Russian law, for example, restricted access to services like LinkedIn, encrypted texting app Telegram and ‘radio’ app Zello by mandating companies to open up their software to the nation’s security forces and law enforcement agencies.

“When Russia passed its domestic internet bill into law, it wasn’t clear how much the government would actually work to make it happen,” Sherman added. “Now it’s clear they do intend to modify systems so the internet within Russian borders can be cut off from the global net at will.

These disconnection tests which Russia has planned for the near future — as well as, according to documents, annually going forward — are steps in the direction of making this so-called “RuNet” work.

They also line up with a series of international pushes by authoritarian governments to make “cyber sovereignty” of this kind more palatable to the global community.

[American Military News reported: “The developments also suggest a trend towards greater Russian censorship over the internet activity of its citizens. In recent months, Russia has shown a closeness with the communist Chinese government and the two countries have established an agreement for joint internet censorship efforts.”].

Published by UK’sdailymail .co .uk  on October 25, 2019. Reprinted here for educational purposes only. May not be reproduced on other websites without permission from the Daily Mail.

2. For RUSSIA:
a) list the who, what, where and when of the news item
b) How does the Russian government explain its need for the RuNet?
c) Why are critics concerned with the government’s push for an internal internet? (What do they say is the government’s real reason for a separate internet?)
d) How does cybersecurity policy expert Justin Sherman explain the government’s motive?

A new law that could further cordon Russia from the global internet passed in April.

What is the law and why is it controversial?

The new Stable RuNet law would give the Russian communications regulator, known as Roskomnadzor, broader powers to monitor network traffic and potentially provide a “kill switch” to disconnect Russia from the wider internet in the event of cyberattack. Essentially, the law is meant to help create a digital drawbridge between Russia and the rest of the world that the country can raise in an emergency.

While the Kremlin says the law is meant to increase security, many observers, especially human rights groups, have speculated it will further increase censorship initiatives from Putin’s government.

That’s because the law was proposed by the same group of lawmakers in Russia who recently passed a law criminalizing the spread of online news that disrespects the government, said Aleksandr Yampolskiy, CEO of network security rating company SecurityScorecard.

“First, they made the language very broad. If you operate a network in Russia, you are required to create a way to have government oversight of that information,” he said.

The law also lacks specifics, Yampolskiy said, an indication the Kremlin is building in some wiggle room for how exactly it will be enforced.

“The language is deliberately vague and broad, so that will also be something for [business] to consider, since it’s unclear what you are going to have to do to comply,” he said.

But it will probably become another tool to enforce positive messaging about Putin’s government, Yampolskiy said.

The law also doesn’t provide much information as to how it will be accomplished technologically, said Natalia Gulyaeva, head of the Moscow intellectual property, media and technology practice group for law firm Hogan Lovells.

“Theoretically, the law encompasses installing new equipment on data transfer points in order to secure functionality of [the] Russian part of Internet in case of any global shutdowns,” she said. “The authors of the law have not provided any comments on the technical side of the law.”

Not as strict as China, but riskier for foreign businesses

Russia and China are frequently put into similar categories as countries racing to further limit speech on the internet.

But the new Russian law is not as restrictive as “The Great Firewall of China,” which allows Beijing to monitor communications and prohibits access to a wide range of U.S. and global websites.

“China’s Great Wall was established when the Internet came to China, so it developed along with the development of the internet in China,” said Gulyaeva.

China’s system provides direct control of internet traffic to the Communist Party government in Beijing, while the Russian proposal gives indirect control to several bodies — including the Roskomnadzor, the Federal Security Service and the central Russian government.

“For instance, the law imposes obligations on communications service providers to filter information received from cross-border data transfers and purchase special equipment which will create autonomy of the Russian part of the internet,” she said.

However, the move is riskier for foreign business interests in Russia than similar censorship moves are for businesses in China. The law will likely put obligations on any U.S. company that operates networks in Russia to replace equipment, and possibly raise concerns about government-sponsored surveillance of enterprises with offices there, said Yampolskiy.

However, Russia has a lot less leverage because many foreign businesses could withdraw. “Obviously, this is a much smaller economy, and there are a lot fewer incentives to negotiate with any onerous new requirements,” he said. (from an April 18, 2019 CNBC report by Kate Fazzini)