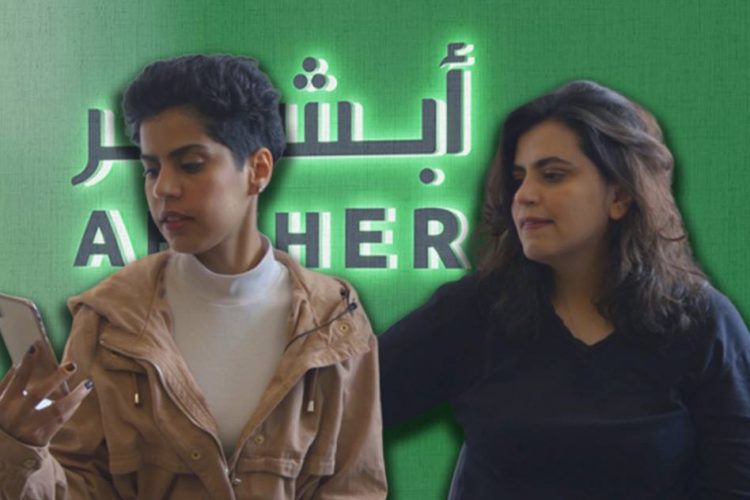 (by Amanda Woods, New York Post) – The runaway Saudi sisters who sought asylum in the former Soviet republic of Georgia are pushing for Apple and Google to get rid of an “inhuman” app that allows men to keep tabs on female relatives’ travel, according to a new report.

“It gives men control over women,” Wafa told Reuters on Wednesday. “They have to remove it.”

Saudi men can download Absher from their country’s version of the Google and Apple online stores — and use it to update or withdraw permissions for women in their family to travel abroad.

They can also receive SMS updates if the women’s passports are used.

Neither company was immediately available to comment to Reuters, but Apple CEO Tim Cook said in February he hadn’t heard of the app but would “look into it.”

Absher, which is free, allows Saudis to renew their passports, make appointments and view traffic violations. Saudi Arabia defended a mobile app that allows men in the kingdom to track female relatives after rights groups and a US lawmaker criticised tech giants for offering it. (photo: AFP)

But Saudi women must have permission from male relatives to work, marry or travel under the country’s “guardianship” system.

If Absher is removed — or if tech giants insist that it permits women to organize their own travel, which would hamper the guardianship system — it could spark significant change, the sisters said.

“If [they] remove this application, maybe the government will do something,” Wafa said.

Civil rights groups, diplomats and US and European politicians have recently called for the app to be removed from online stores.

“Technology can, and should, be all about progress. But the hugely invasive powers that are being unleashed may do incalculable damage if there are not sufficient checks in place to respect human rights,” United Nations human rights chief Michelle Bachelet said in a Wednesday statement.

While Saudi Crown Prince Mohammad bin Salman has lifted the driving ban for [some] women and last year said he favors an end to the guardian system, he’s not yet called for it to be stopped.

Both Maha and Wafa have appealed for help from Georgia after fleeing Saudi Arabia — launching a Twitter account called “Georgia Sisters” where they say they are in danger and will be killed if they are forcibly returned home.

Published at nypost .com on April 25. With Post wires. Reprinted here for educational purposes only. May not be reproduced on other websites without permission from New Your Post.

2. For SAUDI ARABIA:
a) list the who, what, where and when of the news item
b) What is the Saudi government’s Absher app? – What does it do?
c) Why are Saudi sisters Maha and Wafa asking Apple and Google to shut down the app?
d) How did Apple’s CEO Tim Cook respond to questions about the app?
e) Why do you think Mr. Cook still has taken no action on this app?
f) Apple marked International Women’s Day last month with a video… Part of Apple’s statement read: “Every woman and girl, no matter where they live, no matter the color their skin, no matter what religious faith, no matter what – MUST have access to the same basic human rights.”
Google’s mottos are: “Don’t be evil” and “Do the right thing.”
What would you tell Google’s CEO Sundar Pichai and its founder Sergey Brin, as well as Apple’s CEO Tim Cook about their inaction on an app that enables Saudi men to have state sponsored control over women?

Human Rights Watch (HRW) documented the Saudi implementation of the “guardianship” system in 2016. HRW stated that:

“In Saudi Arabia, a woman’s life is controlled by a man from birth until death. Every Saudi woman must have a male guardian, normally a father or husband, but in some cases a brother or even a son, who has the power to make a range of critical decisions on her behalf.”

Under Saudi law, all females must have a male guardian (wali), typically a father, brother, husband or uncle (mahram). Girls and women are forbidden from traveling, conducting official business, or undergoing certain medical procedures without permission from their male guardians.

Women need their guardian’s permission for:

In 2012, the Saudi Arabian government implemented a new policy to help with enforcement on the traveling restrictions for women. Under this new policy, Saudi Arabian men receive a text message on their mobile phones whenever a woman under their custody leaves the country, even if she is traveling with her guardian.

In 2015, the Saudi government launched the Absher app hosted on the Google Play and Apple App store. It allows men to track women allow or prohibit women to travel through airports. (from wikipedia)

From an April 27 Forbes article by Julian Vigo:

In February, U.S. Senator Ron Wyden, Democrat from Oregon, drafted a letter to these Apple and Google, asking them to “take immediate action to prevent your technical infrastructure, including your app stores, from being used by the Saudi government to enable the abhorrent surveillance and control of women.” Since Wyden’s letter, both tech giants have been called out for their having hosted such an app on their platforms for many years and the questions go far beyond this one incident.

After weeks of critique, Google announced last month that it will continue to host Absher but just this past week, sisters Maha and Wafa al-Subaei who fled Saudi Arabia for Georgia, have renewed calls for Absher to be pulled from the platforms of both tech companies.

While both Google and Apple have claimed to be on the side of the freedom of expression, both companies have been criticized for maintaining a double standard.