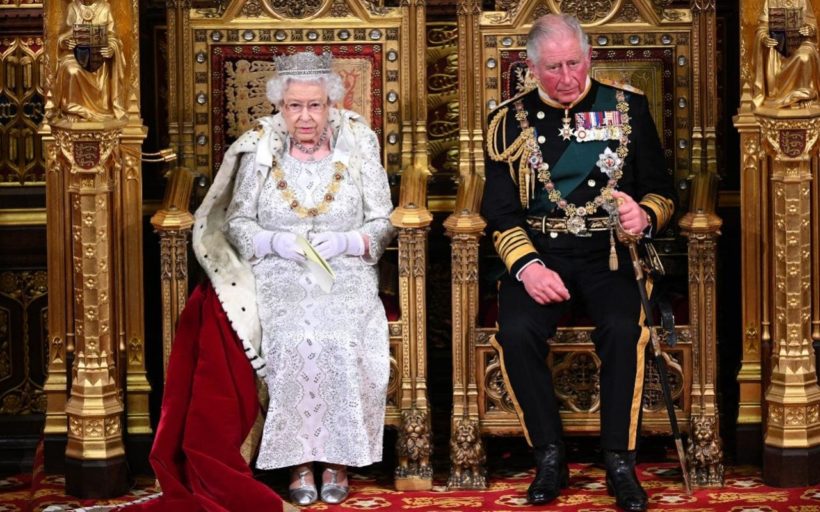 The Queen and The Prince of Wales at the State Opening of Parliament (Photo: Paul Edwards/The Sun)

(by Clyde Hughes, UPI) — Queen Elizabeth II opened a new session of British Parliament Monday with her traditional speech, in which she laid out Prime Minister Boris Johnson’s legislative agenda — amid rising fears there won’t be a Brexit deal before a critical deadline this weekend.

The “Queen’s Speech,” filled with the usual pomp, included 22 new bills that will establish Johnson’s legislative priorities — including stronger penalties for violent and sexual criminals and undocumented migrants.

“We have been a soft touch on foreign criminals for too long,” Home Secretary Priti Patel said. [Home Secretary is similar to the U.S. Secretary of State.] “The sentence for breaching a deportation order is far too low at the moment and many criminals conclude that it’s worth trying to get back in the country when all you get is a slap on the wrist.”

The queen said in her speech the government’s priority is to leave the EU on Oct. 31.

Johnson’s administration and EU negotiators open the week with continuing talks toward a deal to leave the EU on schedule on Oct. 31. Signs of progress were seen in negotiations last week, but a Brexit summit on Thursday and a legislative deadline Saturday loom over renewed talks this week.

Johnson is legally required to seek an extension if there is no agreement by Saturday. The Benn Act requires the delay, although the prime minister has said the departure will happen on Oct. 31 with or without an agreement. An effort to force Johnson legally to seek a delay, as a precautionary measure, was rejected by a Scottish court last week.

The pivotal EU summit will be held in Belgium on Thursday, the final time the bloc’s leaders will meet before the departure deadline.

“I will be setting out our plan to shape the economy for the future and triggering the start of our infrastructure revolution,” Javid said. “This is the right and responsible thing to do — we must get on with governing.”

Published by UPI .com on October 14, 2019. Reprinted here for educational purposes only. May not be reproduced on other websites without permission from United Press International.

1. For THE UNITED KINGDOM, give the following information:

2. For THE UNITED KINGDOM:
a) list the who, what, where and when of the news item
b) How many new bill were included in the Queen’s Speech?
c) How did the Home Secretary explain the bill on stronger penalties for undocumented migrants?
d) What did the Queen say was her government’s priority as Parliament opens?
e) Read about the Queen’s Speech under “Background” below, then watch a clip from her speech under “Resources.” What do you think is most important to learn from this speech?

The State Opening of Britain’s Parliament marks the formal start of the parliamentary year and the Queen’s Speech sets out the government’s agenda for the coming session, outlining proposed policies and legislation. It is the only regular occasion when the three constituent parts of Parliament – the Sovereign, the House of Lords and the House of Commons – meet.

When is State Opening?

State Opening happens on the first day of a new parliamentary session or shortly after a general election.

The Fixed Term Parliament Act, which sets out new rules on the timing of general elections, received royal assent (became law) on September 15, 2011.

What happens during State Opening?

State Opening is the main ceremonial event of the parliamentary calendar, attracting large crowds and a significant television and online audience. It begins with the Queen’s procession from Buckingham Palace to Westminster, escorted by the Household Cavalry.

The Queen arrives at Sovereign’s Entrance and proceeds to the Robing Room. Wearing the Imperial State Crown and the Robe of State, she leads the Royal Procession through the Royal Gallery, packed with 600 guests, to the chamber of the House of Lords.

The Queen’s Speech is delivered by the Queen from the Throne in the House of Lords. Although the Queen reads the Speech, it is written by the government. It contains an outline of its policies and proposed legislation for the new parliamentary session.

After the Queen’s Speech

When the Queen leaves, a new parliamentary session starts and Parliament gets back to work. Members of both Houses debate the content of the speech and agree an ‘Address in Reply to Her Majesty’s Gracious Speech’. Each House continues the debate over the planned legislative programme for several days, looking at different subject areas. The Queen’s Speech is voted on by the Commons, but no vote is taken in the Lords.

Traditions surrounding State Opening and the delivery of a speech by the monarch can be traced back as far as the 16th century. The current ceremony dates from the opening of the rebuilt Palace of Westminster in 1852 after the fire of 1834. (from the British Parliament’s official website: parliament.uk/about/how/occasions/stateopening)

What is the Queen’s Speech – from Euronews:

Excerpt of Queen’s Speech from The Guardian:

Read about the Parliament of the U.K. at: wikipedia.