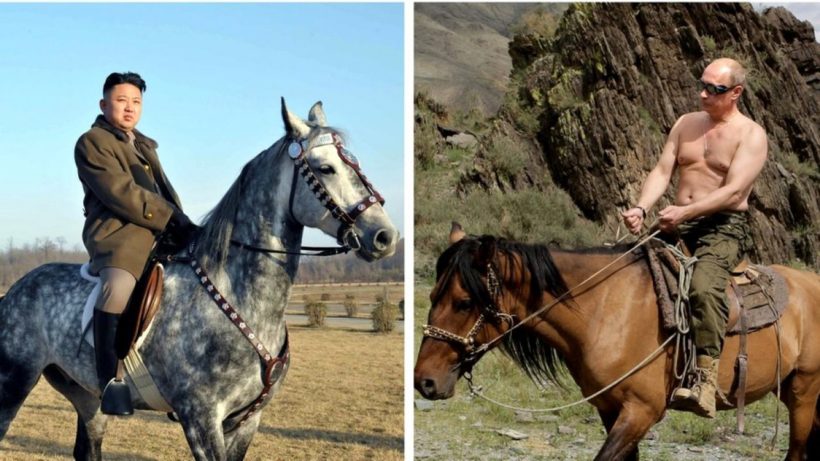 Preparations for the meeting in Vladivostok, a Russian city on the Pacific, were held in secrecy because of North Korean security concerns, Kremlin adviser Yuri Ushakov said Tuesday.

Ushakov said the talks would focus on the standoff over the North’s nuclear program, noting that Russia will seek to “consolidate the positive trends” stemming from U.S. President Donald Trump’s meetings with Kim.

Kim had two summits with Trump, but the latest in Vietnam in February collapsed because North Korea wanted more sanctions relief than Washington was willing to give for the amount of nuclear disarmament offered by Pyongyang.

Putin’s adviser added that the Kremlin would try to help “create preconditions and a favorable atmosphere for reaching solid agreements on the problem of the Korean Peninsula,” Ushakov said.

Ushakov pointed at a Russia-China roadmap that offered a step-by-step approach to solving the nuclear standoff and called for sanctions relief and security guarantees to Pyongyang. He noted that the North’s moratorium on nuclear tests and scaling down of U.S.-South Korean military drills helped reduce tensions and created conditions for further progress.

Ushakov said that Putin-Kim summit’s agenda will also include bilateral cooperation. He added that Russia’s trade with North Korea is minuscule at just $34 million last year, mostly because of the international sanctions against Pyongyang.

Russia would like to gain broader access to North Korea’s mineral resources, including rare metals. Pyongyang, for its part, covets Russia’s electricity supplies and wants to attract Russian investment to modernize its dilapidated Soviet-built industrial plants, railways and other infrastructure.

In the meantime, Vladivostok has been seeing a number of unusually strict security measures. Maritime authorities said Tuesday that the waters around Russky Island, off the southern tip of Vladivostok, would be closed to all maritime traffic between Wednesday morning and Friday morning.

The island, which is home to a university with a conference hall, is seen as a likely summit venue.

Separately, local media reported that some platforms at Vladivostok’s main train station would be closed for several days, and that buses will be rerouted from the train station Wednesday.

News website Vl .ru reported that municipal authorities undertook road works to make the entryway in and out of the train station less steep — presumably to allow Kim’s limousine to drive straight out from the platform.

Kim, like his father, avoids air travel and is likely to travel by train to Vladivostok, about 675 kilometers (419 miles) north of Pyongyang.

Earlier on Tuesday, North Korea confirmed the meeting in a terse, two-sentence statement.

North Korea has so far not gotten what it wants most from the recent flurry of high-level summitry between Kim and various world leaders — namely, relief from crushing international sanctions [orchestrated by the Trump administration]. There are fears that a recent North Korean weapon test and a series of jibes at Washington over deadlocked nuclear negotiations mean that Pyongyang may again return to the nuclear and long-range missile tests that had many in Asia fearing war in 2017. (See “Background” below for another view by the BBC.)

North Korea announced last week that it had tested what it called a new type of “tactical guided weapon.” While unlikely to be a prohibited test of a medium- or long-range ballistic missile that could scuttle the negotiations, the announcement signaled the North’s growing disappointment with the diplomatic breakdown.

From an AP report published at Utah’s Daily Herald on April 23. Reprinted here for educational purposes only. May not be reproduced on other websites without permission from the Associated Press.

2. For NORTH KOREA:
a) list the who, what, where and when of the news item
b) What is the purpose/goal of the summit, according to Putin advisor Yuri Ushakov?
c) Why did the negotiations between North Korea and the U.S. collapse in February?
d) What is Russia calling on the UN (and U.S.) to do regarding North Korea?
e) What do Russia and North Korea each hope to gain from the meeting between the two leaders?
f) Read a BBC analysis under “Background” below. The reporter does not think the summit will have any significant outcome. The Trump administration’s strategy of imposing strict economic sanctions (and causing UN member countries to do the same) has had more of an effect than any other negotiations over the past 3 U.S. presidents’ tenures. Do you think the Trump administration will succeed in getting North Korea to abandon its nuclear weapons program? Explain your answer. (Ask a parent the same question.)

Excerpted from an analysis of the upcoming summit between Vladimir Putin and Kim Jong-un, from BBC News by Andreas Illmer, April 23:

The summit between Putin and Kim Jong-Un comes soon after the collapse of the Trump-Kim talk in Hanoi.  But both sides will be bringing very different agendas to the table.

How much influence does Moscow have over North Korea?

But since the collapse of the Iron Curtain the relationship has suffered. With weakened ideological ties there was no reason for special treatment and support. And as a regular trading partner, North Korea was not very attractive to Russia, as it was unable to pay international market prices.

Since Russia’s gradual estrangement with the West since the early 2000s, relations have picked up somewhat. Moscow has found itself backing countries “based on the old logic that my enemy’s enemy is my friend,” explains Professor Andrei Lankov of Seoul’s Kookmin University.

Their relationship makes sense geographically – they share a short border not far from the important Russian port city of Vladivostok, where the two leaders are widely expected to meet.

According to Russia’s foreign ministry, there are also some 8,000 North Korean labourers working in Russia, sending vital revenues back home. Other estimates put that number much higher.  Under the current UN sanctions, all of these workers will have to be sent home by the end of the year.

What does North Korea want?

The Hanoi summit between Kim Jong-un and US President Donald Trump collapsed without any agreement or progress on North Korea’s nuclear program.

It’s an outcome the North Korean leadership had not expected. It had hoped to agree a compromise which would see the some easing of the international sanctions which are damaging its economy.

“International sanctions [orchestrated by Trump] are beginning to take effect and without a change in the US position, it’s very unlikely North Korea will be able to get sanctions relief and pick up trade with the outside world,” says Prof Lankov.

So North Korea needs to contact everyone who might be helpful in achieving that goal. Anything from real progress to even symbolic diplomatic assistance would be useful to Pyongyang.

Alexey Muraviev, associate professor at Curtin University in Perth, Australia, says North Korea has to show the US “they’re not in isolation. “He said, “If they can show that major powers are still backing them up, this will give them additional bargaining power to talk to the US and China.”

So Russia is an attractive option.

…Courting other dialogue partners goes in tandem with renewed missile activity to pressure Washington back to the negotiating table.

“North Korea’s strategy always has been walking a tight-rope between the conflicts of the world powers and getting concessions that way,” Park Young-ja, a researcher at the Korea Institute for National Unification, told BBC Korean. “So meeting with Russia could be a card it can play against China and the US.”

What does Moscow want?

President Putin has been eager to meet with the North Korean leader for quite some time. Yet amid the two Trump-Kim summits, the Kremlin was somewhat sidelined.

So after the failure of the Hanoi talks, a meeting with Kim Jong-un is a good opportunity for Mr. Putin to put Moscow back on the playing field.

Like the US and China, Russia is uncomfortable with North Korea being a nuclear state and in the early 2000s was part of the ill-fated six-party talks after Pyongyang withdrew from the Nuclear Non-Proliferation Treaty.

But unlike Washington, Moscow wants to accept the status quo: denuclearisation is seen as an unrealistic goal so the Kremlin instead wants talks with Pyongyang aimed at stabilising the situation.

Russia’s involvement is also a matter of prestige and reputation. Regardless of how the US-North Korea relations will pan out, Russia is keen on being involved at least at some level.

If Mr. Putin manages to have at least some say in the situation, he can show that Russia is still present in the region.  And if the Kremlin was to contribute in a meaningful way to solving the North Korea situation, even better.

What’s the likely outcome of the talks?

By most estimates, there won’t be any major agreement or deals struck between the two countries.

Aside from getting some international recognition and leverage for future talks with Washington, North Korea is primarily interested in money.

“The country’s economic situation is bad and Pyongyang desperately wants a relaxation in the sanctions so regular trade can pick up,” says Mr. Lankov. “It also wants free money in the form of aid.”

Yet neither is likely to be forthcoming from Moscow.

The overwhelming sense in Moscow remains that Pyongyang is an unreliable and unmanageable state it will not spend a lot of money on, Mr. Lankov says. And money is what North Korea needs most.

“I don’t think North Korea can get much from Russia,” Lee Jai-chun, a former South Korean ambassador to Russia, told BBC Korean. “The Russian economy is in a difficult situation after the sanctions over Crimea. The meeting would a gesture to the Trump administration, and to South Korea.”

A meeting will also have domestic implications, he says. “North Korea’s citizen know that the summit with US was a failure so the meeting with Russia could be a ‘show’ to the North Korean people.”

In terms of economic ties, Russia is bound by UN Security Council sanctions. “It will not officially violate those sanctions,” Mr Lankov says. “At best Moscow might turn a blind eye to some minor sanctions violations.”

Open violations seen as sanctioned by the Kremlin would only hurt Russia’s interests with very little in return: North Korea is not a relevant export market for Russia. And in turn, North Korea has no major products useful for Russia.

“So at most, there will be some small symbolic aid promises,” suggests Mr. Lankov, “and a lot of words with very little action.” – “Moscow is wary of spending money on a country that’s seen as extremely unreliable, especially at a time when Russia itself is suffering from international sanctions.”

So in the end, Russia might be merely another voice urging North Korea against escalating tensions while Kim Jong-un will hope the meeting might put him in a better bargaining position deal with Washington. (from BBC News, by Andreas Illmer, April 23)