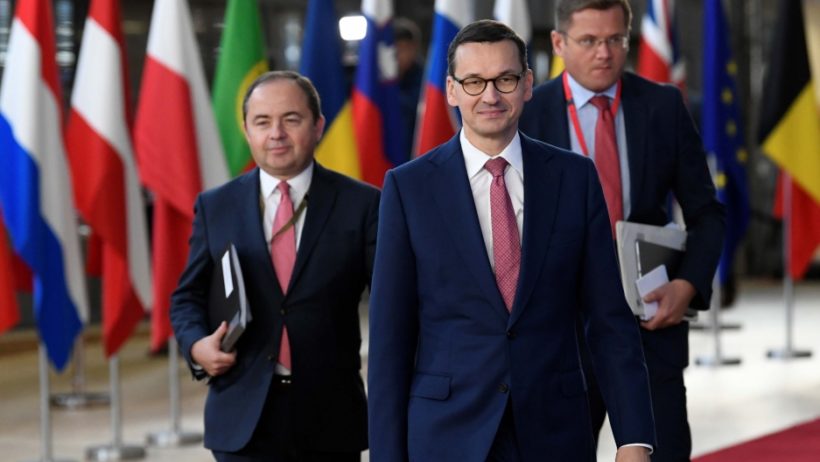 (by Joanna Plucinska and Tatiana Jancarikova in Bratislava, Reuters) WARSAW/BRATISLAVA (Reuters) – Poland’s government said on Tuesday, Nov. 20 it would join a growing list of mainly ex-Communist European countries planning to reject a U.N. [plan to] regulate migration, as Slovakia’s leader said he also had reservations.

Approved in July by all 193 U.N. member nations except the United States, the Global Compact for Safe, Orderly and Regular Migration addresses issues such as how to protect people who migrate, integrate them into new countries or safety return them home.

Drafted following the biggest influx of migrants into Europe since World War Two, most fleeing war or poverty in the Middle East and Africa, the pact, which the UN claims is non-binding, is due to be adopted next month by heads of government at a meeting in Morocco.

Poland said it would not be endorsing the document.

“(It) doesn’t meet Polish demands regarding strong guarantees for countries to have the right to independently decide (who) they choose to accept,” the government in Warsaw said in a statement.

Poland’s ruling [conservative] Law and Justice party (PiS) has maintained strong anti-migrant rhetoric since it took office in 2015, and Prime Minister Mateusz Morawiecki indicated earlier this month he was likely to reject the pact. …

Hungary, Czech Republic and Bulgaria have already rejected the pact, and Austria has said it does not plan to adopt it either.

In Bratislava, Slovakia’s Prime Minister Peter Pellegrini said he was concerned his country might be required to take in more migrants than it wanted to.

“Our red lines are obligations that would limit our sovereignty to decide about accepting migrants,” he told reporters after a government meeting.

Published at Reuters on November 20. Reprinted here for educational purposes only. May not be reproduced on other websites without permission from Thomson Reuters.

NOTE: Before answering the questions below, read the info under “Background” below.

2. For POLAND:
a) list the who, what, where and when of the news item
b) What is the UN Global Compact for Safe, Orderly and Regular Migration?
c) Why has Poland decided not to sign on to the Global Compact on Migration?
d) What did Slovakia’s Prime Minister have to say about his country’s rejection of the UN migrant pact?
e) Slovak foreign minister Miroslav Lajcak, who oversaw the drafting of the UN migration pact last year while serving as President of the U.N. General Assembly, threatened to quit the government if Slovakia rejected it. He said the issue was “being hijacked by populists, xenophobes and nationalists.”
Soeren Kern at Gatestone Institute wrote in 2017: “Europe’s establishment parties, far from addressing the concerns of ordinary voters, have tried to silence dissent by branding naysayers as xenophobes, Islamophobes and neo-Nazis.” They are also referred to as “far-right” “nationalist” as negative labels. A nationalist is defined by Oxford as: a person who advocates political independence for a country: a person with strong patriotic feelings, especially one who believes in the superiority of their country over others. Why do you think people who put the interests of their own country and borders first are labeled as bad/negative? Explain your answer. Ask a parent the same question.

All Visegrad countries [Poland, the Czech Republic, Slovakia and Hungary] have now rejected the United Nations pact on the treatment of migrants worldwide, after Slovak Prime Minister Peter Pellegrini on Sunday (Nov. 25) announced his country’s position.

After Hungary, Austria, Poland, the Czech Republic, Croatia and Bulgaria, Slovenia too has made it plain that it will not send a representative at the intergovernmental conference in Marrakesh, Morocco on December 10.

“Slovakia will not support this United Nations pact under any circumstances and will not agree with it,” Pellegrini told reporters.

Outside the EU, Australia, Switzerland and Israel also announced they will not sign the agreement.

In Belgium, a coalition partner to the government of Charles Michel said the pact was “particularly problematic” for them.

Last year, the Trump administration pulled out of the Obama-backed UN pact, calling its provisions “inconsistent” with US immigration policy. U.S. Ambassador to the United Nations Nikki Haley called the agreement “simply not compatible with U.S. sovereignty.” According to former Secretary of State Rex Tillerson, signing it “could undermine the sovereign right of the United States to enforce our immigration laws and secure our borders.”