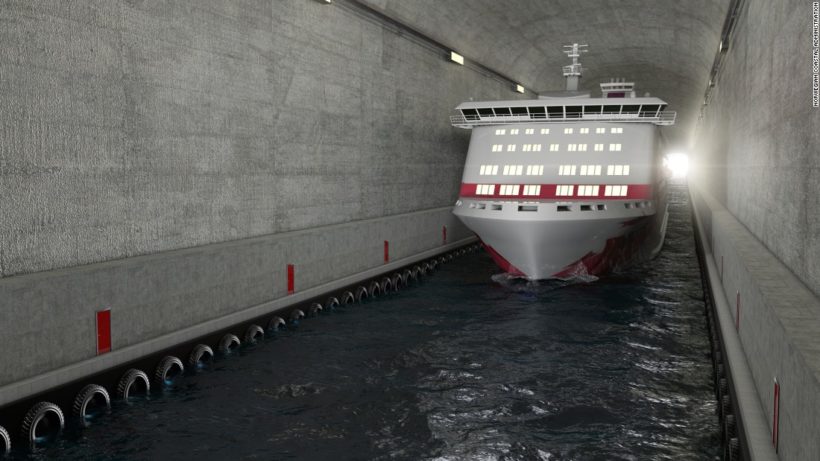 (CNN Travel) — Norway has got the go-ahead to construct what’s being billed as the world’s first ship tunnel, designed to help vessels navigate the treacherous Stadhavet Sea.

First announced a few years ago by the Norwegian Coastal Administration, this mile-long, 118-feet-wide tunnel will burrow through the mountainous Stadhavet peninsula in northwestern Norway.

Building this engineering marvel will cost somewhere in the region of 2.8 billion Norwegian kroner ($330 million) and take between three to four years, with construction due to commence in 2022.

“It’s a project that has been planned for decades. So it’s very pleasant to finally be able to start the construction work in one year,” temporary project manager Terje Andreassen from the Norwegian Coastal Administration tells CNN Travel.

At the moment, ships navigating the surrounds of Stadhavet are often impacted by rough tides and bad weather.

“The coastline outside that peninsula is the most stormy area in Norway, with the hurricanes,” says Andreassen. “You get a lot of strange currents here.”

Sometimes ships have to wait for days in the nearest harbor for weather conditions to improve.

But inside the tunnel, weather and tide shouldn’t impact transit.

“It will be connected better, it will be easier to travel,” he said.

The Norwegian Coastal Administration notes that while other tunnels can accommodate small boats and barges, no other underpass has been built to serve large ships.

The ship tunnel at Stadhavet will burrow through the narrowest point of the Stadhavet peninsula, which makes the undertaking more doable, as the tunnel won’t actually be that long.

Entry to the tunnel will be controlled by a traffic light system. 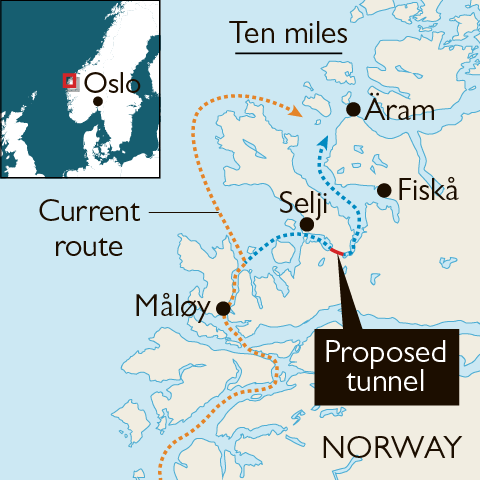 The plan is for burrowing to take place via underground drilling rigs and pallet rigs. Building the tunnel will likely involve removing some buildings — and roughly three million cubic meters of rock. …

While the tunnel is likely to attract the attention of infrastructure enthusiasts from across the world, the chief goal of the tunnel is to simply to make transiting the Stadhavet Sea “safe” and “predictable,” as Andreassen puts it. …

Published at CNN .com on March 22. Reprinted here for educational purposes only. May not be reproduced on other websites without permission.

2. a) For what purpose has the world’s first ship tunnel been designed?
b) What problem will it solve?

3. a) Length and width of the tunnel?
b) Estimated time to build?
c) Cost?

4. How long ago did the planning begin on this project?