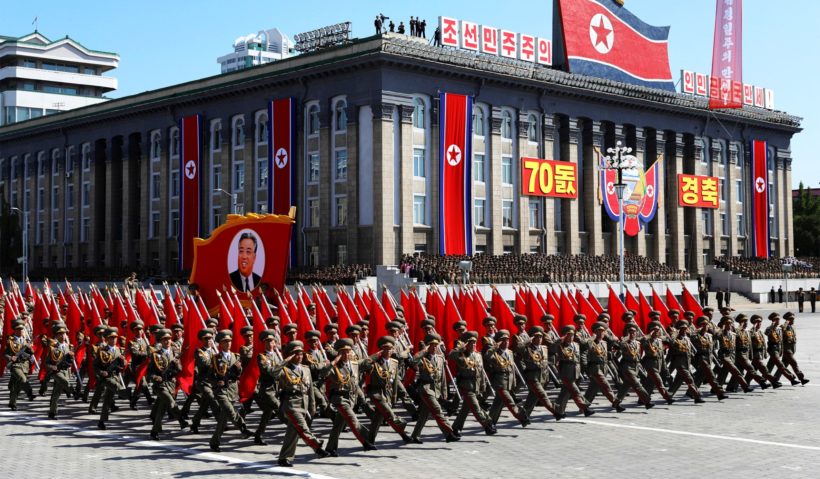 (by Wooyoung Lee, UPI) SEOUL — North Korea’s state media reported on Monday on the regime’s 70th-anniversary military parade, a day after it was held.

“A massive parade took place in the Kim Il Sung Square in the capital city of Pyongyang to celebrate the 70th anniversary of North Korea’s founding on Sept. 9,” said the report.

“The great leader warmly waved hands to participants in the parade and audiences and gave congratulatory messages to the people and soldiers of the DPRK,” it said.

The coverage came a day after the parade ended on Sunday, unusual for the North Korean state media, which used to make the same-day coverage for past military parades.

According to media reports, the annual parade did not include a display of long-range missiles or new nuclear weapons. The North had previously showcased its latest nuclear capabilities and developments on the occasion of its military parades.

U.S. President Donald Trump tweeted on the North’s toned-down military parade with a thank you to Kim.

“North Korea has just started their parade, celebrating the 70th anniversary of founding, without the customary display of nuclear missiles,” he said.

“Experts believe that North Korea cut out the nuclear missiles to show President Trump its commitment to denuclearize,” quoting a Fox News report.

2. For NORTH KOREA:
a) list the who, what, where and when of the news item
b) What was missing from North Korea’s annual military parade this year?
c) Ask a parent and/or a grandparent: how significance do you think this omission was? Please explain your answer.

From PYONGYANG, North Korea:   North Korea held a major military parade and revived its iconic mass games to celebrate its 70th anniversary. But in keeping with leader Kim Jong Un’s new policies, the emphasis was firmly on building up the economy, not on nuclear weapons.

The North rolled out some of its latest tanks and marched its best-trained goose-stepping units in Sunday’s parade but held back its most advanced missiles and devoted nearly half of the event to civilian efforts to build the domestic economy.

It also brought the mass games back after a five-year hiatus. The games are a grand spectacle that features nearly 20,000 people flipping placards in unison to create huge mosaics as thousands more perform gymnastics or dance in formation on the competition area of Pyongyang’s 150,000-seat May Day Stadium. (from defensenews .com, Eric Talmadge for the AP)