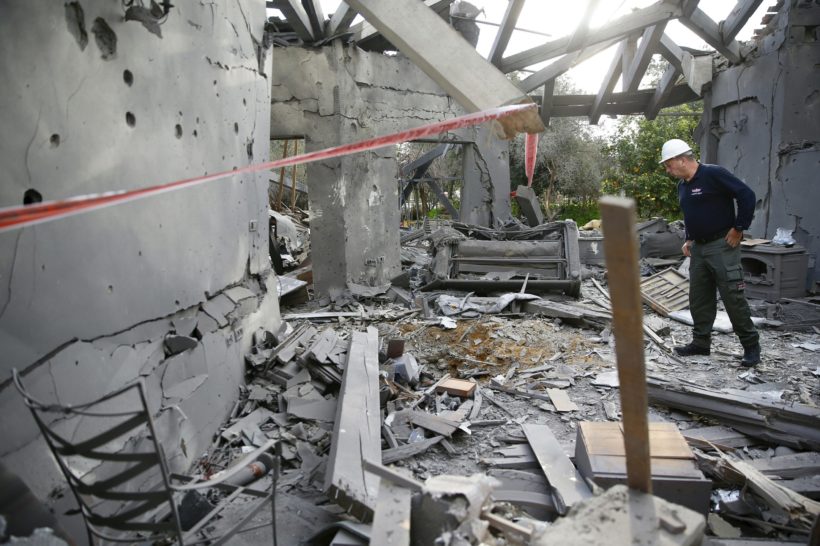 A police officer inspects the damage to a house hit by a rocket in Mishmeret, central Israel, Monday, March 25, 2019. An early morning rocket from the Gaza Strip struck a house in central Israel on Monday, an Israeli rescue service said, in an eruption of violence that could set off another round of violence shortly before the Israeli election. (AP Photo/Ariel Schalit)

(by Josef Federman and Fares Akram, Associated Press) JERUSALEM — Israeli forces on Monday struck targets across the Gaza Strip, including the offices of Hamas’ supreme leader, in response to a surprise rocket attack from the Palestinian territory, as the military bolstered its troops and rocket-defense systems in anticipation of a new round of heavy fighting with the Islamic militant group.

Israel opened public bomb shelters in most major cities and civil defense authorities canceled sports events and public transportation in southern Israel. The Israeli army said at least 30 rockets had been fired into Israel, as air raid sirens wailed across southern Israel late Monday night. The army said nearly all of the rockets were either intercepted or landed in open areas.

Late Monday, Hamas announced that a cease-fire had been brokered by Egyptian mediators. But shortly after, renewed rocket fire could be heard in Gaza, setting off air-raid sirens in southern Israel.

Ahead of the Israeli airstrikes, Hamas’ leadership went into hiding. Witnesses reported seeing Hamas evacuating personnel from government premises. Hamas also announced that its Gaza chief, Yehiya Sinwar, had canceled a public speech. Other leaders turned off their mobile phones, while Hamas police were seen evacuating their stations.

Several airstrikes rocked Gaza, including an explosion that destroyed the office of Hamas leader Ismail Haniyeh. The Israeli military confirmed the bombing, saying the building had “served as an office for many military meetings.” An earlier blast destroyed a multistory building in Gaza City that Israel said had served as a Hamas military intelligence headquarters.

There were no immediate reports of casualties. In both blasts, Israel fired warning shots to evacuate the buildings. …

The sudden conflagration came at a time when both Netanyahu and his Hamas foes are in desperate situations.

Netanyahu is in a tight race for re-election, and just two weeks before the April 9 vote, faces tough criticism from challengers who accuse him of being too soft on Hamas.

In Washington to meet with President Trump, who announced the U.S. recognition of Israel’s control of the Golan Heights, Netanyahu was forced to cut short his trip following the attack. …

Hamas’ leader Ismail Haniyeh issued a statement warning Israel against heavy retaliation. He said the Palestinian people “will not surrender” and its militant factions “will deter the enemy if it exceeds the red lines.”

Hamas is facing perhaps its toughest domestic test since seizing control of Gaza from the rival Palestinian Authority 12 years ago.

An Israel-Egyptian blockade, combined with sanctions by the Palestinian Authority and mismanagement by the Hamas government, have all fueled an economic crisis that has left Gaza with an unemployment rate above 50 percent. …

Last week, hundreds of Gazans protested the dire conditions, a rare expression of public discontent against the authoritarian government. Hamas responded with a violent crackdown, beating and arresting dozens of demonstrators and drawing rare public criticism.

The rocket attack, which caught Israel off guard, may have been an attempt by Hamas to divert attention from its growing domestic woes.

Published at Associated Press on March 25. Reprinted here for educational purposes only. May not be reproduced on other websites without permission from the AP. 2. For ISRAEL:
a) list the who, what, where and when of the news item
b) What actions did Israeli officials take following a rocket attack by Hamas from Gaza into Israel? (for Israeli citizens and against Hamas?)
c) What actions did Hamas’ leadership take after the rocket attack on Israel?
d) What did the Israel military do prior to launching targeted attacks on Hamas’ military intelligence headquarters?
e) The Hamas surprise rocket attack destroyed a residential home in a farming community near Tel Aviv, wounding six members of a family, including two women, two children and an infant. The air raid sirens in Israel gave them just enough time to get to their shelter. What do the AP reporters suggest is a likely motive for the surprise attack?
f) Following Hamas’ attack on Israel, Hamas’ leader Ismail Haniyeh issued a statement warning Israel against heavy retaliation. He said the Palestinian people “will not surrender” and its militant factions “will deter the enemy if it exceeds the red lines.” Also from the article: “In Beirut, the powerful Lebanese terrorist group Hezbollah said its leader, Hassan Nasrallah, met Monday with a senior Hamas delegation. Hezbollah said they discussed the Gaza situation and ‘Israeli aggression.’” What is your reaction to the Hamas leaders’ statements?

More from the AP article above:

Israel and Hamas have fought three wars, most recently in 2014. Although neither side appears to have an interest in another war, fighting could easily spin out of control. The 2014 conflict lasted 50 days and ended with over 2,000 Palestinian deaths, including hundreds of civilians, and 73 killed on the Israeli side.

Netanyahu faces the difficult task of delivering a tough blow to Hamas while avoiding protracted fighting that could work against him on election day.

Yaakov Amidror, a former national security adviser to Netanyahu, said a mild response was not an option. “It will be something on a bigger scale,” he said. “He doesn’t want a war before elections, but they put him in a corner.”

Monday’s attack came 10 days after rockets were fired from Gaza toward Israel’s densely populated commercial capital of Tel Aviv, and the Israeli military struck back. Gaza’s Hamas leaders said the rocket was fired accidentally and the fighting quickly subsided.

The sounds of air raid sirens jolted residents of the Sharon area, northeast of Tel Aviv, shortly after 5 a.m. Monday, sending them scurrying to bomb shelters.

The rocket destroyed a residential home in the farming community of Mishmeret, wounding six members of a family. The Magen David Adom rescue service said it treated seven people, including two women who were moderately wounded. The others, including two children and an infant, had minor injuries.

The Israeli military said Hamas militants fired the rocket from southern Gaza. It said its Iron Dome rocket-defense system was not activated because the attack in central Israel had not been anticipated. The army added it was reinforcing its missile defense batteries in preparation for an escalation.

Maj. Mika Lifshitz, a military spokeswoman, said it was a self-manufactured rocket with a range of 75 miles, making it one of the deepest rocket strikes ever carried out by Hamas. Lifshitz added that two armor and infantry brigades were being mobilized to the Gaza front and that a limited drafting of reserves was also taking place.

Netanyahu came under heavy criticism from allies and opponents for what they say has been an ineffective policy containing Gaza militants.

He has conducted indirect cease-fire talks through Egyptian mediators in recent months, and even allowed the delivery of millions of dollars of Qatari aid to Hamas to ease harsh conditions in Gaza.

“The reality in which Hamas turned Israel into a hostage is unprecedented and unfathomable,” his chief challenger, Benny Gantz, wrote on Twitter on Monday. Gantz is a former military chief who led the army during the last Gaza war in 2014.