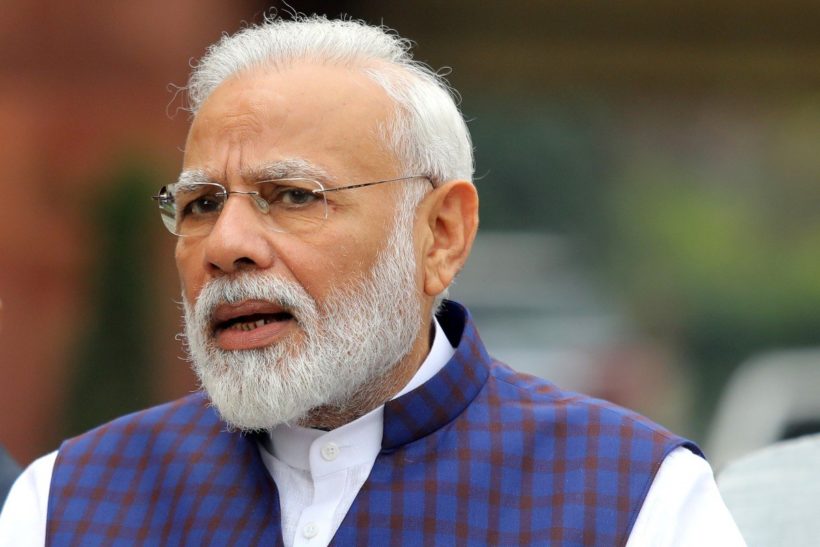 (by Agence France-Presse) — Fresh protests rocked India Monday as anger grew over new citizenship legislation slammed as anti-Muslim, with six people dead in the northeast and up to 100 reported injured in New Delhi.

The law fast-tracks citizenship for non-Muslim migrants from three neighbouring Muslim majority countries (Bangladesh, Pakistan and Afghanistan), but critics allege it is part of Prime Minister Narendra Modi’s Hindu nationalist agenda to marginalize the 200 million Indians who follow Islam. [India’s Muslim population is about the world’s second-largest and the world’s largest Muslim-minority population. India is home to 11% of the world’s Muslim population.]

In the country’s northeast, however, even allowing non-Muslims citizenship is opposed by many locals who fear their culture is threatened by Bengali-speaking Hindus.

Modi, who insists he is not anti-Muslim, said…that Muslims from the three Muslim-majority countries are not covered because they have no need of India’s protection. …

On Sunday night in Delhi, police with batons fired tear gas and charged protesting students before storming a Muslim university [where students had been protesting the law].

On Monday fresh protests took place in Delhi, Chennai, Bangalore and Lucknow, where hundreds of students — most of them Muslims, television pictures indicated — tried to storm a police station, hurling volleys of stones at officers cowering behind a wall. 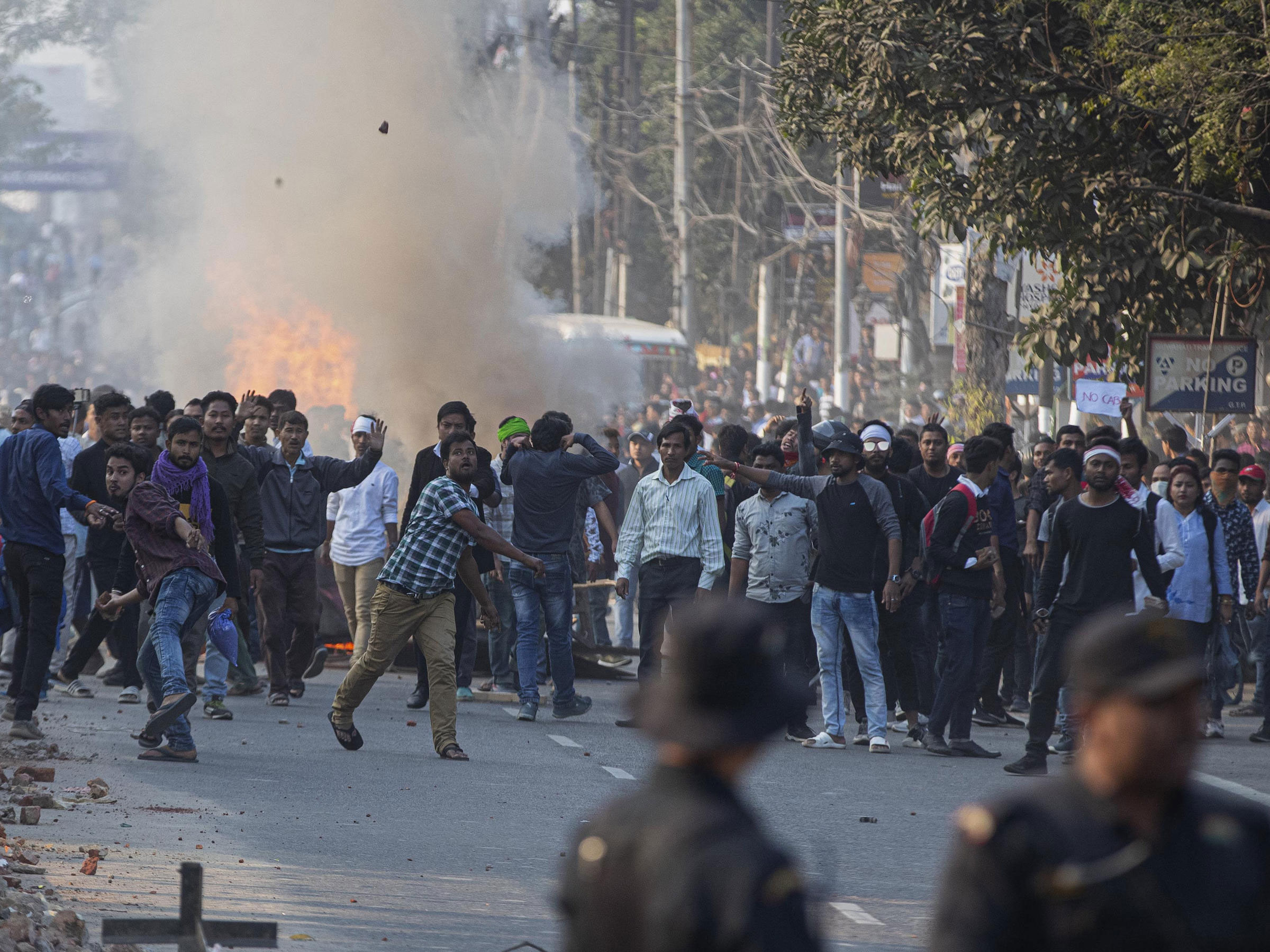 Protesters throw stones at security officers during a protest against the Citizenship Amendment Bill in Gauhati, India, on Wednesday. (Anupam Nath / AP)

In the east in Kolkata, capital of West Bengal, thousands gathered for a major demonstration called by state premier Mamata Banerjee, a firebrand opponent of Modi (who is also a Hindu).

In recent days empty trains were torched there and on Monday internet access remained suspended [by the government].

In Kerala in the south, another state whose government refuses to implement the citizenship law, several hundred people also protested. Kerala’s finance minister Thomas Isaac tweeted: “United action of all secular force is the need of the hour.”

Protests were reported in Mumbai, West Bengal, Aligarh, Hyderabad, Patna and Raipur over the weekend.

Authorities in northern Uttar Pradesh, meanwhile, have cut internet access in western parts of the state following demonstrations in Aligarh, home to a large university and a sizeable Muslim population.

The main epicentre of the protests has been in India’s far-flung northeastern states, long a seething and violent melting pot of ethnic tensions. Protesters there are mostly Hindu [who are opposed to illegal immigrants being given citizenship, threatening their livelihood and culture].

On Sunday night in Assam state — following days of rioting and clashes with police — around 6,000 people protested on Sunday evening, with no major incidents reported.

Modi blamed the main opposition Congress party and its allies of “stoking fire,” saying those creating violence “can be identified by their clothes” — a comment interpreted by some as referring to Muslims.

…The new law is being challenged in the Supreme Court by rights groups and a Muslim political party, arguing that it is against the constitution and India’s cherished secular traditions.

Ashok Swain, a professor at Sweden’s Uppsala University said that the scale of the protests had caught Modi’s government, which is presiding over a serious slowdown in economic growth, off guard.

“The protest is getting international attention and also spreading to different parts of the country. This certainly will add pressure on the regime when the economy has failed,” Swain told AFP.

Published by afp .com on December 16, 2019. Reprinted here for educational purposes only. May not be reproduced on other websites without permission from Agence France-Presse.

2. For INDIA:
a) list the who, what, where and when of the news item
b) What does the law do?
c) What are the two different reasons Indians have for opposing this law?
d) How does Prime Minister Modi explain the purpose of the law?
e) Why are Muslims especially opposed to the law?
f) What do you think: is Prime Minister Modi trying to protect persecuted minority religions from neighboring countries who are in India illegally, or is he discriminating against Muslims? Explain your answer. CHALLENGE: Read more on your own.
g) Except for this AFP report, multiple other new outlets reported only that “students” across India were protesting. It is not unusual that Muslim students would be opposed to the law. Why do you think these reports did not indicate that it appeared most of the protesting students were Muslim?

What’s in the bill?

It stipulates that “any person belonging to Hindu, Sikh, Buddhist, Jain, Parsi or Christian community from Afghanistan, Bangladesh or Pakistan, who entered into India on or before the 31st day of December, 2014 (…) shall not be treated as illegal migrant for the purposes of this Act.”

For these migrants, the requirement of residence in India for citizenship by naturalization will be relaxed from 11 years to 5 years.

The CAB now only requires Presidential assent to become law.  (from a Dec. 12 Euronews report)

Why is the law so divisive?

Prime Minister Modi’s Hindu-nationalist BJP government argues that the law aims to accommodate those (who are in India illegally) who have fled religious persecution (they are Hindus from 3 neighboring Muslim-majority countries: Bangladesh, Pakistan and Afghanistan).

Critics say the law is part of the government’s agenda to marginalize Muslims, and that it violates secular principles enshrined in the constitution.

The government denies religious bias and says Muslims are not covered by the new law because they are not religious minorities in the countries they are from, and therefore do not need India’s protection.

Meanwhile, people in India’s Assam region fear that they will be “overrun” by illegal non-Muslim migrants from neighboring Bangladesh.

They argue that outsiders will take over their land and jobs – eventually dominating their culture and identity. (from a Dec. 16 BBC report)