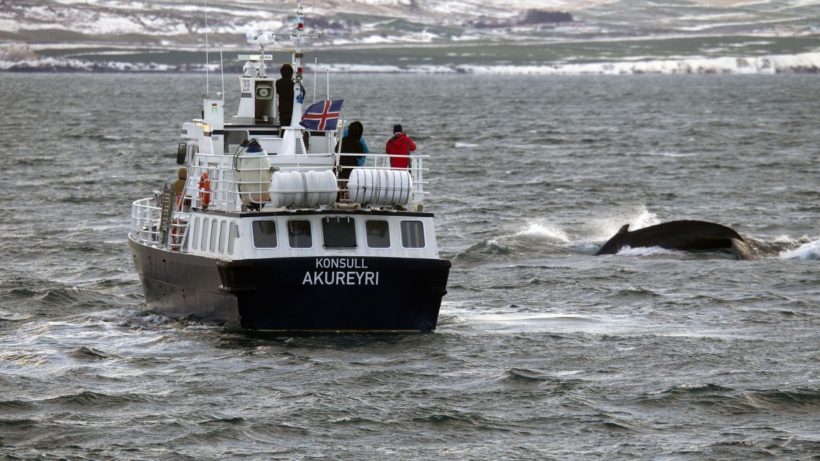 (by Jenny Awford, UK Sun) – Iceland’s Fisheries and Agriculture Minister Kristjan Thor Juliusson announced the government’s decision to allow whalers to harpoon a maximum of 209 fin whales and 217 minke whales every year until 2023.

The government said the decision was based on recommendations from the country’s Marine Research Institute and a Jan. 15 report from the University of Iceland on the macro-economic impact of whaling.

“Whaling in Icelandic waters is only directed at abundant whale stocks, North Atlantic common minke whales and fin whales, it is science-based, sustainable, strictly managed and in accordance with international law,” a ministry spokesperson said in a statement.

But activists and conservationists disagree. The Icelandic Environmental Association criticized the research on which the Fisheries Ministry based its quotas.

And Whale and Dolphin Conservation (WDC), an organization aimed at protecting whales around the world, said whaling is no longer beneficial to Iceland’s economy and lacks public support.

“This is a country that’s embraced whale watching and has a different relationship with whales now,” WDC spokesman Chris Butler-Stroud told CNN. “The reality is, the whale meat that’s being consumed there is mostly by tourists, unfortunately. … If it was down to local consumption, this probably would be dead in the water.”

That report also concluded that “Icelanders have managed whaling in a responsible manner.”

Since commercial whale hunting resumed in Iceland in 2006, whaling companies have never killed their full quota. As a result, it’s considered unlikely that all 2,130 whales will be killed under this policy.

Announcing its new quota, the government cited the economic benefits of whaling, as well as official figures showing populations of the once endangered fin whale were recovering – the number of fin whales has increased steadily since 1987.

“During the most recent count in 2015, their population in the central North Atlantic was estimated at 37,000, or triple the number from 1987,” it said in a statement.

This was supported by the recent conclusion by the International Union for Conservation of Nature that fin whale numbers were on the rise.

Along with Norway, Iceland has continued to challenge the International Whaling Commission’s (IWC) ban on commercial whale hunting, which has been in place since 1987.

The International Whaling Commission imposed a ban on commercial whaling in the 1980s due to dwindling stocks. Japan in December said it was pulling out of the IWC due to its disagreement with that policy. Iceland is still a member of the IWC.

1. For Iceland, give the following information:

2. For ICELAND:
a) list the who, what, where and when of the news item
b) How does the government explain its decision? Be specific.
c) Why is it unlikely that the the 2,000 whales permitted to be hunted will be killed under the government’s new policy?
d) For what reasons are environmental groups opposed to the government’s decision?
e) What is your opinion on hunting whales? If done responsibly in limited numbers, and they are no longer endangered, do you support or oppose the whalers? Explain your answer.
CHALLENGE: None of the reports used in this article provided any feedback or statistics about the views of the majority of Icelanders on whaling. Try to find information on how the people view whale hunting.