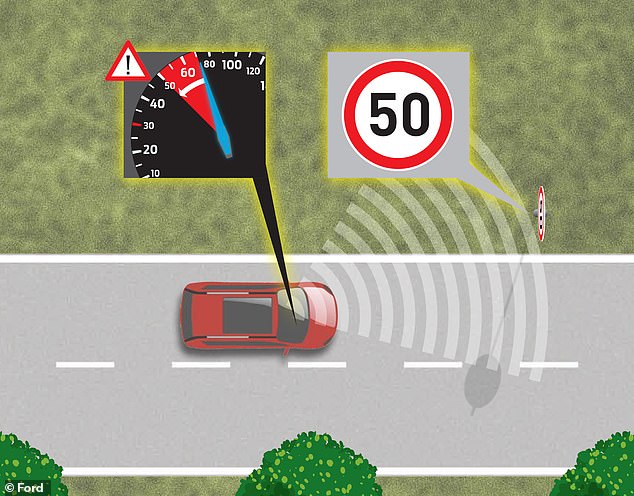 The Intelligent Speed Assistance technology is variable, so it can respond to changing zones and restrict the vehicle's top speed accordingly.

(by Charles Riley, CNNBusiness) – New cars sold in Europe from 2022 will have to be fitted with systems to limit their speed.

Under new safety rules agreed by the European Union, all new vehicles are required to have “Intelligent Speed Assistance” systems as standard equipment.

The EU rules don’t mandate specific technology for the systems, which can be temporarily overridden by the driver. Some carmakers have already developed ways of using GPS or cameras to detect posted speed limits and make sure vehicles adhere to them.

European Commissioner Elżbieta Bieńkowska said in a statement that 25,000 people are killed each year on European roads, with the vast majority of accidents being caused by human error. [Hopefully no accidents will be caused by faulty or malfunctioning computer systems.]

“With the new advanced safety features that will become mandatory, we can have the same kind of impact as when the [seat]belts were first introduced,” she said.

The rules, which also mandate crash data recorders [black boxes] and reversing cameras, were hailed by safety advocates. But others raised concerns over the risk of drivers becoming complacent and less focused on the road conditions. [Others are opposed to Big Brother type control over their private vehicles.]

The European Automotive Manufacturers Association also has concerns about the technology. It warned last year of “many infrastructure-related issues holding back its widespread application.”

It said that road signs are not standardized across Europe, making speed limits difficult to detect. Digital maps lack speed limit information for many roads, and the data is not always current.

“That is why Intelligent Speed Assistance systems should be introduced gradually in cars to provide enough time to update our infrastructure,” it said in December.

Intelligent speed assistance systems don’t automatically apply the brakes when a car is going too fast. Instead, they limit engine power to keep vehicles to the speed limit unless overridden by the driver.

Some European automakers see an advantage in limiting speeds.

Volvo, which is owned by China’s Geely, said earlier this month that it would its stop cars from going faster than 112 miles per hour. [Volvo will also install cameras in its cars from the early 2020s to monitor if drivers are drowsy or drunk – and bring the vehicle to a stop if this is the case.]

It said it is also considering other technology that could put stricter speed limits on cars driving near schools and hospitals.

“We want to start a conversation about whether car makers have the right or maybe even an obligation to install technology in cars that changes their driver’s behavior,” Volvo CEO Håkan Samuelsson said at the time.

The EU rules must now be formally approved by member states and the European Parliament.

Lianne Kolirin contributed reporting.  Published at CNN .com on March 27. Reprinted here for educational purposes only. May not be reproduced on other websites without permission from CNN Business. 1. For the EUROPEAN UNION, give the following information:

2. For the EUROPEAN UNION:
a) list the who, what, where and when of the news item
b) What do the EU commissioners say is the reason for the new rule?
c) How do Intelligent Speed Assistance systems work?
d) What concerns does the European Automotive Manufacturers Association have about the technology?
e) What suggestion did the Association make?
f) The CEO of Volvo said, ”We want to start a conversation about whether car makers have the right or maybe even an obligation to install technology in cars that changes their driver’s behavior.” Do you think it is a good idea for manufacturers to be in control of shaping drivers’ behavior? Explain your answer.
g) Fortune reports: “The Commission is also pitching the safety features as a stepping-stone toward a future of fully-automated vehicles. ‘The new advanced safety features will help drivers get gradually used to the new driving assistance,’ it said in a statement. ‘Increasing degrees of automation offer significant potential to compensate for human errors and offer new mobility solutions for the elderly and physically impaired. All this should enhance public trust and acceptance of automated cars, supporting the transition towards autonomous driving.’”
What is your reaction to this? Would it be the same if the U.S. government developed similar rules/laws? Explain your answer.

OPTIONAL: How much do you think all of this technology will increase the cost of any new vehicle?

Drivers should be able to override the system by pushing hard on the throttle – just in case they’re overtaking another motorist who has decided to put their foot down.

The European Transport Safety Council (ETSC) called for all cars to have a switch to turn the Intelligent Speed Assistance (ISA) on or off, though each time a vehicle is started the feature will automatically be active.

It will instantly tell the driver to reduce their speed when they’re breaking the law.

If the driver continues to drive above the speed limit for several seconds, the system should sound an alert for a few seconds and display a visual warning until the vehicle is operating at or below the speed limit again, the transport safety council said.

The council is likely to push for there to be no off switch for the limiters once motorists have become accustomed to the systems.

What does it all mean in practice? (Theo Leggett, BBC News)

The idea that cars will be fitted with speed limiters – or to put it more accurately, “Intelligent Speed Assistance” – is likely to upset a lot of drivers. Many of us…don’t like the idea of Big Brother stepping in.

However, the new system as it is currently thought of will not force drivers to slow down. It is there to encourage them to do so, and to make them aware of what the limit is, but it can be overridden. Much like the cruise control in many current cars will hold a particular speed, or prevent you exceeding it, until you stamp on the accelerator.

…Under the new rules, cars will also be fitted with compulsory data recorders, or “black boxes.”

So if you have an accident, the police and your insurance company will know whether you’ve been going too fast. If you’ve been keeping your foot down and routinely ignoring the car’s warnings, they may take a very dim view of your actions.

In fact, it’s this “spy on board” which may ultimately have a bigger impact on driver behavior than any kind of speed limiter. It’s easy to get away with reckless driving when there’s only a handful of traffic cops around to stop you. Much harder when there’s a spy in the cab recording your every move.

All of this may well reduce accidents, but it won’t eliminate them. You can force people to slow down, you can watch what they’re doing, you can help them with emergency braking – but you can’t get rid of basic bad driving.

Unless, of course, you have self-driving cars.