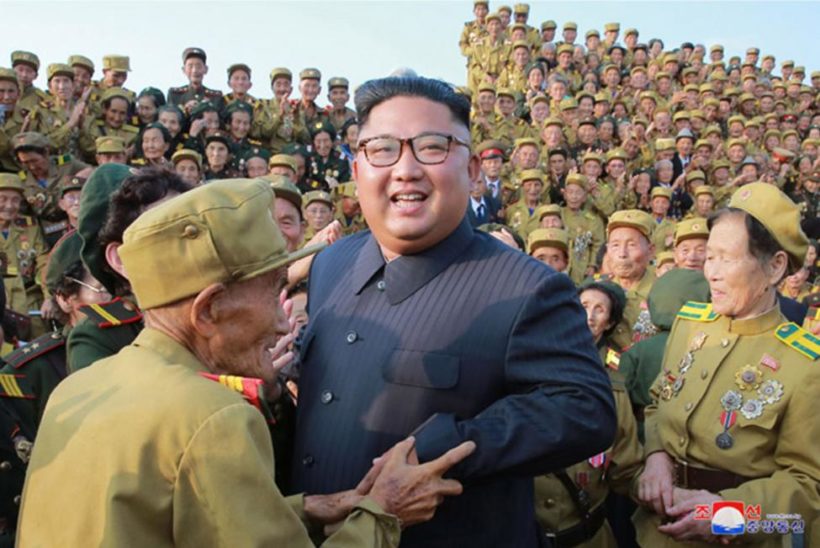 Kim Jong Un continues to benefit from the deployment of a massive overseas labor force, a defector said Wednesday. (File Photo by KCNA/UPI)

UNITED NATIONS, Oct. 25 (UPI) — International sanctions designed to block North Korea deployment of overseas labor are not working and the state-sanctioned workforce in Russia and the Middle East remains a significant source of revenue for the Kim Jong Un regime, a defector said.

Roh Hoi-chang, a former central party secretary for the External Construction Supervision Bureau in North Korea, told UPI a source in the regime spoke to him a week ago.

Appearing at a North Korea human rights event at United Nations headquarters on Wednesday, the defector said he maintains contact with sources he developed while he worked at sites in Russia and the Middle East for seven years. He escaped in 2013 and resettled in South Korea in May 2014. According to Roh’s source, United Nations Security Council sanctions Resolution 2375 is not being properly enforced at sites, often under private supervision.

“Sanctions, to my knowledge, has not done much [to curb] North Korea,” he said.

The defector also said the private employers who need a cheap North Korean workforce willing to endure harsh conditions are often “out of reach” of local governments. The companies reap profits from using the cheap labor, Roh said, as states look the other way.

The lack of compliance with sanctions among some U.N. member states, and the continued use of forced laborers, have benefited North Korea as other sources of revenue have become restricted or blocked. …

“We would sometimes get injured on the job, and because so many people, 10 to 30 per small room, lived together, we would catch diseases,” Roh said, recalling his time at a Middle East work site where the temperatures would average 100 degrees Fahrenheit during the day.

In Russia, North Korean “guest workers” were given inadequate food, even as they began their day at construction or logging sites “as soon as they were up.”

“The meals consisted only of rice and salt, but it was better than what we could get in North Korea.”

Each worker would be paid about $3,000 per month, but most of the earnings would be “donated” to the Korean Workers’ Party, leaving individuals to keep about $60. …

“The deployment of overseas workers only fattens the bellies of the on-site employers and North Korea’s ruling elite,” Roh said. “This is another form of imprisonment.”

Published at UPI on October 25. Reprinted here for educational purposes only. May not be reproduced on other websites without permission from United Press International.

2. For NORTH KOREA:
a) list the who, what, where and when of the news item
b) How is this forced labor possible after the UN Security Council Resolution 2375, agreed to by all UN member countries, was implemented?
c) Read the “Background” below the questions. What responsibility does the entire UN have to ensure that their member countries involved end the slave labor practices?
d) What responsibility does FIFA have to conduct an investigation and consider moving the 2022 World Cup (and all following) to countries where human rights are observed for all people?

It is an open secret that a significant number of North Korean labourers work in China and Russia in border cities, especially in Siberia. But owing to minimal record-keeping, little is known about the workers’ presence or activities.

North Koreans working as ‘state-sponsored slaves’ in Qatar: (excerpted from an 11/30/17 report at the UK Guardian)

Thousands of migrant labourers from North Korea are toiling for years on construction sites in Qatar for virtually no pay – including on the vast new metropolis that is the centrepiece of the World Cup – in what may amount to “state-sponsored slavery.”

According to testimonies from workers and defectors, labourers from the reclusive state said they receive almost no salaries in person while in the Gulf emirate during the three years they typically spend there.

The North Korean regime, led by Kim Jong-un, is currently subject to international sanctions as it continues to defy calls to end its nuclear programme and address severe human rights abuses. A recent UN report accused the regime of crimes against humanity. The foreign currency earned by its overseas workforce is a crucial tool for propping up the isolated country’s fragile economy.

In the sprawling construction zone that will eventually become Qatar’s gleaming $45bn (£28bn) Lusail City, where the 2022 World Cup final will be held, four construction sites are said to be using North Korean workers, although there is no suggestion they are involved in building World Cup stadiums.

On one site, North Koreans battled biting desert sands and searing heat to construct a luxury residential tower. They laboured on as day turned to night, long after workers from other nationalities had left the site.

“The descriptions of the conditions North Korean workers endure in Qatar – abuse of vulnerability, withholding of wages and excessive overtime – are highly indicative of state-sponsored trafficking for forced labour,” a modern form of slavery, said Aidan McQuade, the director of Anti-Slavery International.

Qatar’s treatment of its migrant labourers has come under increasing scrutiny as it gears up for the 2022 World Cup, following a Guardian report last year [in 2016] that revealed widespread deaths and abuse among migrant workers. In May 2014 the emirate announced a series of reforms to improve their living and working conditions. [There is no indication that these modern day slave laborers conditions have improved.]

First to leave are the Vietnamese, then the Indians, followed by Nepalese and Thais; a united nations of workers helping Qatar build the ambitious vision for its future.

But late into the evening, after everyone else has left, one group of workers toil on, their efforts lit only by an occasional fluorescent tube light. The voices echoing around the site reveal their unlikely origin. These men are North Korean; an army of labourers from a tyrannical dictatorship, working on perhaps the most high-profile development in Qatar: Lusail City.

When completed, the metropolis will have two golf courses, an entertainment city, housing for 200,000 and a state-of-the-art 86,000-seat stadium that is set to host the 2022 World Cup final.

“They work constantly,” said a manager of the lavish tower project, which employs about 50 North Koreans. “I have even built a room for them so they can rest without having to go back to their labour camp.”

Despite this, the conditions North Korean workers endure in Qatar are likely to constitute forced labour, a modern form of slavery, says Aidan McQuade, director of Anti-Slavery International. “The fact that these conditions may be viewed as preferable to life in North Korea does not negate the conclusion of forced labour,” says McQuade. “It is simply a further dreadful indictment of the dictatorship in Pyongyang, which exploits the vulnerability of its citizens to enrich itself in collusion with the Qatari autocracy.”