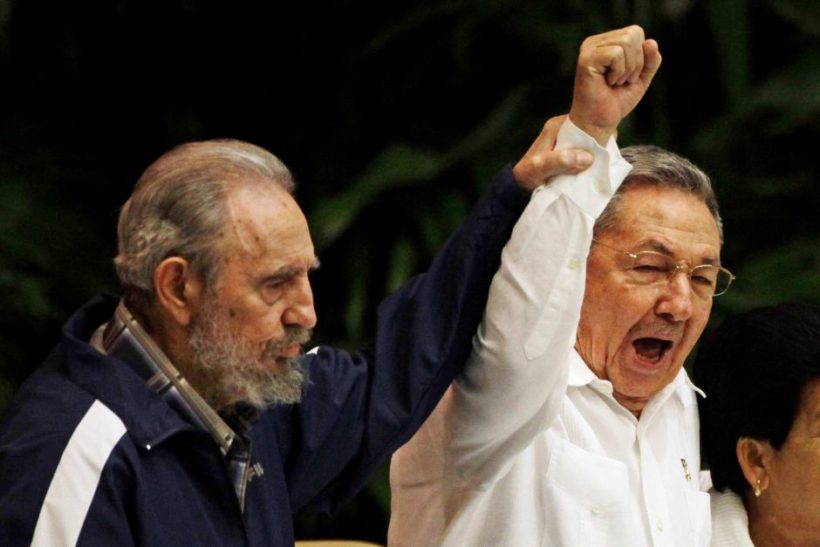 Communist Dictator Fidel Castro (now-deceased) raised his brother Raul Castro's hand (Raul is now the current dictator) as they sang the anthem of international socialism in 2011.

(by Michael Weissenstein and Andrea Rodriguez, Associated Press) HAVANA — The Cuban government announced Friday that it is launching widespread rationing of chicken, eggs, rice, beans, soap and other basic products in the face of a grave economic crisis.

Commerce Minister Betsy Díaz Velázquez told the state-run Cuban News Agency that various forms of rationing would be employed in order to deal with shortages of staple foods. She blamed the hardening of the U.S. trade embargo [renewed] by the Trump administration. [The U.S. had an embargo from 1958 when Communist dictator Fidel Castro seized control of Cuba until 2015, when President Barack Obama re-established ties with the Communist country and eased embargo regulations.] Economists give equal or greater blame to a plunge in aid from the socialist government of Venezuela, where the collapse of the state-run oil company has led to a nearly two-thirds cut in shipments of subsidized fuel that Cuba used for power and to earn hard currency on the open market.

“We’re calling for calm,” Díaz said, adding that Cubans should feel reassured that at least cooking oil would be in ample supply. “It’s not a product that will be absent from the market in any way.”

Cuba imports roughly two thirds of its food at an annual cost of more than $2 billion and brief shortages of individual products have been common for years. In recent months, a growing number of products have started to [disappear] for days or weeks at a time, and long lines have sprung up within minutes of the appearance of scarce products like chicken or flour. Many shoppers find themselves still standing in line when the products run out, a problem the government has been blaming on “hoarders.”

Manuel Ordoñez, 43, who identified himself as a small business owner, said the new measures would do nothing to resolve Cuban’s fundamental problems.

“What the country needs to do is produce. Sufficient merchandise is what will lead to shorter lines,” he said.

Limited rationing of certain products has already begun in many parts of the country, with stores limiting the number of items like bottles of cooking oil that a single shopper can purchase. The policy announced by Díaz appears to go further and apply the same standards across the country of 11 million people.

The Cuban economy crashed in 1991 with the fall of the Communist government of the Soviet Union and plunged the island into a more than decade-long period of misery and hunger that ended with the arrival of subsidized Venezuelan oil in the early 2000s.

The latest shortages and rationing appear to mark the end of a phase of relative prosperity but conditions are nowhere close to the deprivation of what is known as Cuba’s “special period.” Cuba’s highest leaders say that while tough times lie ahead, there will be no return to the worst days of the post-Soviet depression because the island has diversified its economy and built trade ties with countries around the world.

Food stores in Cuba are government-run and sell products ranging from highly subsidized to wildly overpriced by global standards. [There is no free market in Communist Cuba]. Every Cuban receives a ration book that allows them to buy small quantities of basic goods like rice, beans, eggs and sugar each month for payment equivalent to a few U.S. cents. Cuban ration price list and ration book. On the board the first column is the product, then the allowance and the price.

Cubans with enough money [think those with connections in the Communist government] can buy more of those basic goods at “liberated” prices that are still generally below the world average. At the highest of Cuba’s three tiers, brand-name goods from high-quality rice to fancy jams can be purchased for often two to three times the price in their country of origin. [In Cuba, everyone can purchase the same inferior quality food at low prices; only those with connections to the Communist government can afford better quality.]

Díaz said chicken will now be sold in limited quantities in every type of store — with cheaper chicken limited to 11 pounds per purchase and the more expensive variety capped at two packages per purchase.

Low-priced soap, rice, bean, peas and eggs will now only be sold in limited quantities per person and controlled through the national system of ration books, she said.

Sales of those products at higher prices do not appear to be affected for the moment. The measures can be expected to have a serious impact on private business owners who often buy cheaper-priced goods at state stores in the absence of access to a wholesale market. Cuba maintains a total monopoly on wholesale commerce, imports and exports, with virtually no access for the country’s small but growing private sector.

Díaz provided a grim series of statistics on food production by the state-run sector, which has found itself struggling to find the cash it needs to pay for basic inputs.

She said that in March Cuba produced 900,000 fewer eggs than the 5.7 million needed daily to satisfy national demand. That deficit shrank to 600,000 by mid-April, she said. The production of pork, the most-consumed meat in Cuba and a normally affordable staple of most people’s diets, is hundreds of tons below target.

Díaz said importing food from U.S. producers had become more complicated under Trump, forcing Cuba to search for products that were more expensive and difficult to import.

“Selling limited quantities will lead to equal distribution, so that the greatest number of people can buy the product, and we can avoid hoarding,” she said. [Everyone is miserable together – except for the Communist leaders, who live in luxury.]

Published by AP .com on May 10, 2019. Reprinted here for educational purposes only. May not be reproduced on other websites without permission from Associated Press.

2. For CUBA:
a) list the who, what, where and when of the news item
b) What does Communist Cuba’s Commerce Minster Betsy Diaz Velazquez blame for shortages in Cuba?
c) What is the real reason for the shortages?
d) How much of its food does Cuba import?
e) Why/when did it crash, and then recover, and now crash again?
f) In March Cuba produced 900,000 fewer eggs than the 5.7 million needed daily to satisfy national demand. The production of pork, the most-consumed meat in Cuba and a normally affordable staple of most people’s diets, is hundreds of tons below target.

Cuba’s Communist government-run means of production is unable to produce enough to meet people’s basic needs. Venezuela’s socialist government ran its economy into the ground and everyone is suffering.

Why do you think a majority of young people polled in the U.S. support systems where government controls the means of production, which always leads to shortages and everybody suffering together (except for the leaders, who live in luxury), rather than a free-market, capitalist system, where everyone has the opportunity to make money, and some (like Jeff Bezos and Mark Zuckerberg and Sergey Brin, and Jay Z and Kim Kardashian and Michael Jordan, et al) become millionaires and billionaires?

–Is it because young people don’t understand the economic systems, were never taught the difference, don’t care about working hard to make a lot of money, don’t want anyone to have that much money, don’t understand that the leaders in authoritarian governments always live in luxury while the people suffer?…
Please explain your answer.