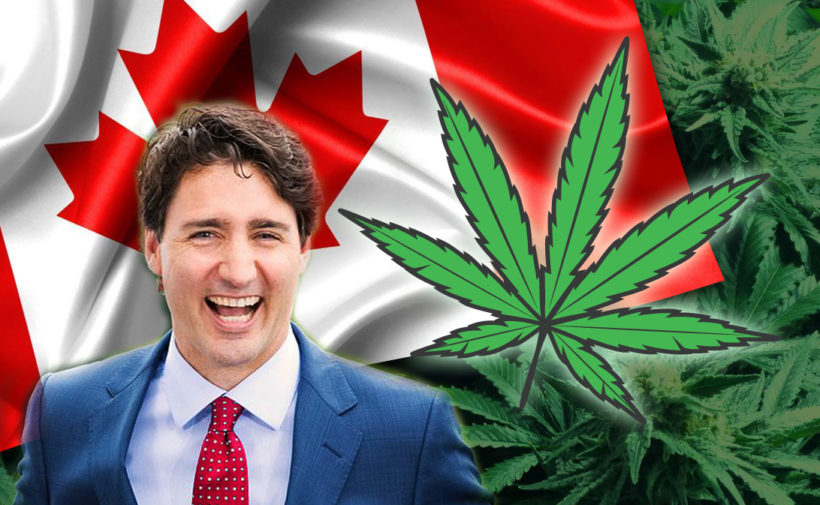 (by Joel Shannon, USA Today) – Canadian lawmakers passed sweeping cannabis legalization in June that will legalize recreational use of marijuana by adults.

Prime Minister Justin Trudeau‘s government had hoped to make pot legal by July 1, but he said the day after the law passed that marijuana would be legal nationwide on October 17.

While many nations have decriminalized marijuana, Uruguay became the first country to fully legalize marijuana [in 2013 and last year began allowing sales in local pharmacies (though purchase is limited to citizens)].

Canada’s legislation, known as the Cannabis Act, allows provinces to establish their own systems for licensing and regulating marijuana businesses, according to a statement from the Marijuana Policy Project.

Under the national framework, adults will be allow to possess up to 30 grams of marijuana, the Marijuana Policy Project says.

“It’s been too easy for our kids to get marijuana – and for criminals to reap the profits. Today, we change that. Our plan to legalize & regulate marijuana just passed the Senate,” Canadian Prime Minister Justin Trudeau tweeted in reaction to the bill’s passage.

In the USA, nine states and the District of Columbia have legalized cannabis, but marijuana remains federally classified a Schedule 1 drug with “no currently accepted medical use and a high potential for abuse,” according to the Drug Enforcement Administration.

[Canadians are among the highest per capita users of cannabis, with 4.6 million or one in eight having consumed pot this year (including 18 percent of Ottawa youth).] Recreational marijuana sales in Canada could be worth $3.3 billion by 2027.

Published at USA Today on June 20, 2018. Reprinted here for educational purposes only. May not be reproduced on other websites without permission from USA Today.

NOTE: Before answering the following questions read the “Background” below.

2. For CANADA:
a) list the who, what, where and when of the news item
b) What one other country has a law that legalizes “recreational” marijuana?
c) Read the “Background” below. The Canadian government seems to think by legalizing marijuana, it will reduce the number of young people who use it. What do you think?
d) Ask at least 2 adults if they know anyone their age who has used marijuana for a long time and if that person displays any negative side effects. Do they think that person would be better off now if not for long-term marijuana use? (Note: People who smoke marijuana regularly will adamantly argue against the idea that it has any negative effects on anyone.)

“As a doctor and as a father, I do not agree with the legalization of recreational cannabis,” said Antonio Vigano, a medical marijuana specialist and research director at the Sante Cannabis clinic in Montreal, citing the risk of increased consumption among young people.

“There are health concerns,” Gillian Connelly of the Ottawa Public Health Agency admitted. “But legalization is creating an opportunity to have discussions about cannabis use, for example, parents starting a conversation with their kids about it.  People will also have information about what they’re consuming, with THC levels on the package, in order to make informed decisions about how much is okay for them to consume,” she said.

The government sent a mailer to 14 million households outlining the basics, including health warnings and the need to keep cannabis away from children and pets.

Employers, meanwhile, are setting a wide range of restrictions on its use affecting work. The military, for example, has ordered soldiers not to use cannabis eight hours before a shift, while some police and airlines have announced bans.

…Officials dismissed doctors’ concerns about pot’s impact on developing brains under 25, and set the minimum age for consumption at 18 or 19 in line with the legal age for alcohol.

A panel that recommended the framework for legalization to the government said the “current science is not definitive on a safe age for cannabis use.”

[And] “For people who drive, we know that the presence of THC is a risk for attention, concentration, judgement,” said Vigano. (from an AFP news report)

The Canadian Pediatric Society and the Centre for Addiction and Mental Health have publicly stated that marijuana is not harmless and can have negative effects on the brain, especially young brains.

“Simply put, cannabis should not be used by young people,” says Dr. Diane Kelsall, Editor-in-Chief (Interim), Canadian Medical Association Journal. “It is toxic to neurons, and regular use of marijuana can actually change their developing brains.”

“Most of us know a young person whose life was derailed because of marijuana use,” writes Dr. Kelsall. “Bill C-45 is unlikely to prevent such tragedies from occurring — and, conversely, may make them more frequent.”