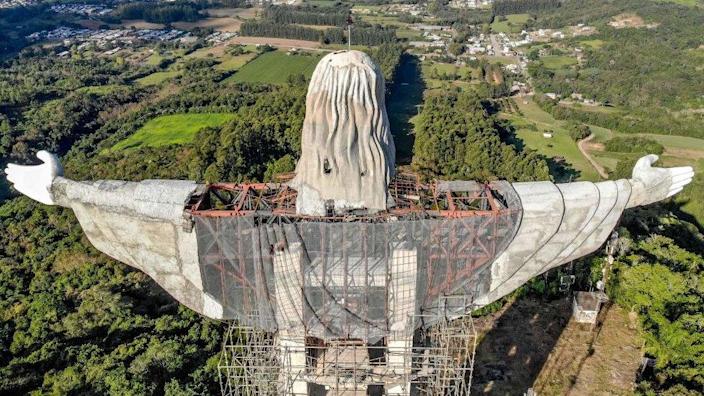 Christ the Protector is 16 feet taller than the statue of Christ the Redeemer in Rio de Janeiro.
Silvio Avila/AFP

(Agence France-Presse) ENCANTADO, Brazil — A giant new statue of Christ being constructed in southern Brazil will rise even higher than the iconic Christ the Redeemer statue that overlooks Rio de Janeiro.

A head and outstretched arms were added to the statue [last month], which has been under construction since 2019 in the city of Encantado, in the state of Rio Grande do Sul.

Completion of the monument is scheduled for late this year, according to the Association of the Friends of Christ, which is coordinating the work.

“It is a day for celebration, for devotion,” said Gilson Conzatti, a local councillor and son of Adroaldo Conzatti, the politician who conceived the idea.

The elder Conzatti, who was the city’s mayor, died in March from complications of COVID-19.

The statue, to be named Christ the Protector, will stand 141 feet tall — including its pedestal, making it one of the world’s tallest statues of Christ with outstretched arms. [It will be 16 feet taller than Rio’s Christ the Redeemer, according to AACristo].

It will measure 118 feet from hand to hand, and will have an interior elevator and an observation deck near the top.

Christ the Redeemer, in comparison, measures 125 feet high, pedestal included, and spans 92 feet hand to hand. It will mark its 90th birthday this October.

Encantado, a city of 22,000, lies 90 miles northwest of the state capital Porto Alegre.

The project is intended both to inspire faith and encourage tourism to the area, its promoters say.

A father-son team of sculptors, Genesio and Markus Moura, are overseeing the work.

The project’s budget of 2 million reals (US$350,000) is being entirely financed through donations, according to the volunteer-based Association of the Friends of Christ.

The group is continuing to raise funds. Its website even features the raffle of a car.

Published by AFP (Agence France-Presse) on April 10, 2021. Reprinted here for educational purposes only. May not be reproduced on other websites without permission.

2. a) How tall will the statue “Christ the Protector” be?
b) When is it scheduled to be completed?

3. How old is Brazil’s original “Christ the Redeemer” statue in Rio?

4. What is the purpose of the project?

5. What do you think about the goals for constructing a statue of “Christ the Protector?”

6. Did you know?
-Until 1962-63, it was common to learn the 10 Commandments, hear the Bible read, and have prayer in public schools across the U.S.
-On June 25, 1962, the U.S. Supreme Court decided in Engel v. Vitale that a prayer approved by the New York Board of Regents for use in schools violated the First Amendment because it represented establishment of religion. In 1963, in Abington School District v. Schempp, the court decided against Bible readings in public schools along the same lines.
Ask a grandparent: Did you go to public school? Were the 10 Commandments taught, or the Bible read in school? What do you think of the removal of God from the public schools?

CHALLENGE: Jesus Christ is also called “Christ our Hope.”  Read about Jesus for yourself from the Bible. The four books that tell His story from birth to death and resurrection are Matthew; Mark, Luke and John.  Also, read about Jesus in Isaiah 53 from the Old Testament. (Note: Students in many other counties – including China, Saudi Arabia and many others – cannot read the bible openly and risk punishment if they do. We are free to do so here.)