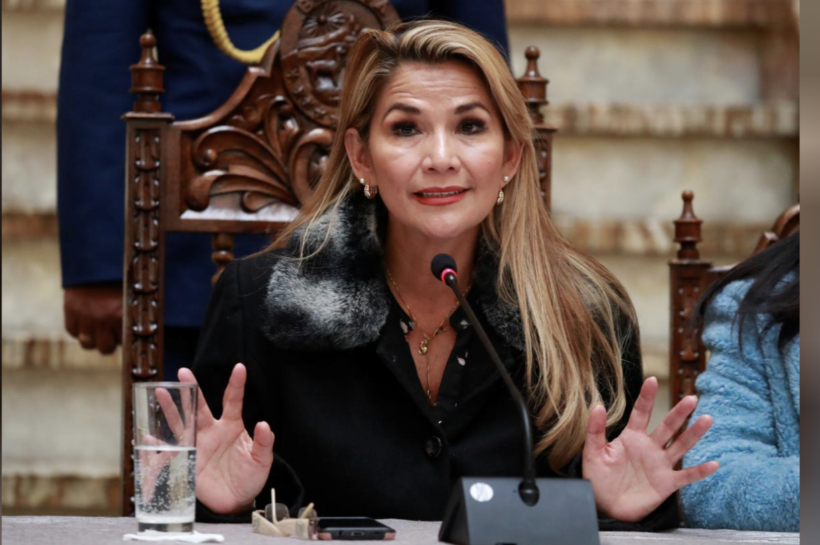 (by Daniel Ramos, Gram Slattery, Reuters) LA PAZ  – Bolivia’s interim government said on Friday it had asked Venezuelan officials to leave the country, and accused Cubans, including doctors, of instigating unrest after the resignation of socialist president Evo Morales.

New Foreign Minister Karen Longaric said Cuba would fly home 725 of its citizens, mostly medical doctors, after she raised concerns about their alleged involvement in protests. She said she had also asked all Venezuelan diplomats to leave for similar reasons.

The foreign policy shake-up comes as protests by Morales’ supporters against the four-day-old government of conservative interim President Jeanine Anez roil the country amid Bolivia’s biggest political upheaval in over a decade.

Socialist Venezuela and communist Cuba have been key allies to leftist [former president] Morales, who swept to office as the country’s first indigenous president in 2006 and resigned under pressure on Sunday over a disputed Oct. 20 election.

The vote was tarnished by allegations of fraud by Morales’ government, sparking widespread anti-government protests that often turned violent. 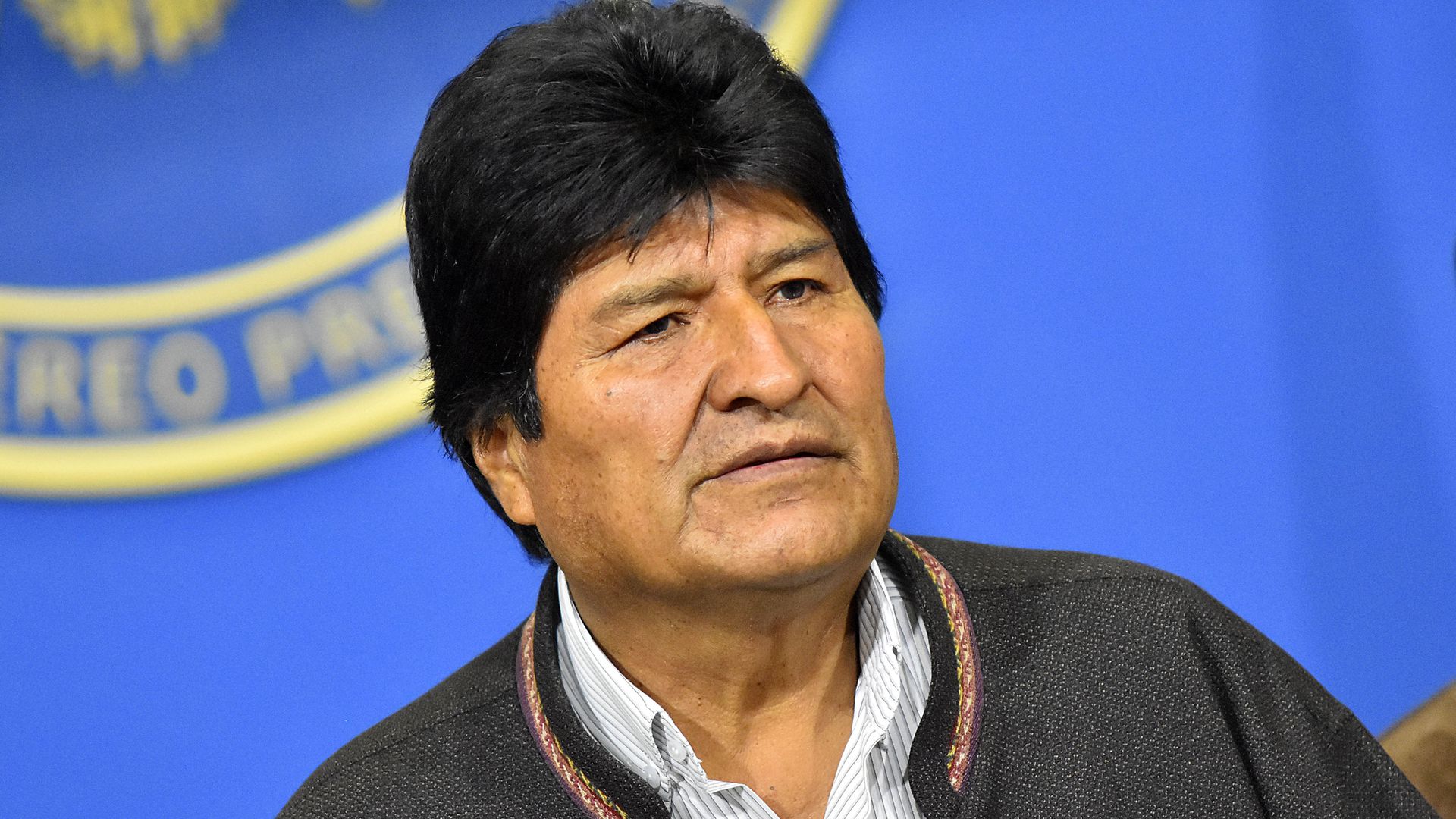 Morales and his vice president fled the country earlier this week to take up an offer of asylum in Mexico. But protests by Morales’ supporters have continued in the capital La Paz, nearby El Alto, and the central city of Cochabamba.

Both countries have backed Morales’ claim that he was toppled in a foreign-backed coup.

Other countries in the region, including Brazil and Ecuador, have taken similar action against Cubans in recent months.

Cuba’s health service generates income by sending more than 50,000 health workers to over 60 countries. Cuba has been accused of mistreating its doctors and pressuring them to take part in political activities, which the country denies.

Police in La Paz fired teargas at protesters on Friday, while schools remained closed and fuel deliveries were disrupted by road blocks.

Local media showed violent standoffs between coca farmers and police in the region of Cochabamba, a stronghold of Morales support. …..

The new minister of government, Jerjes Justiniano, said at a press conference that interim President Anez had called an emergency Cabinet meeting to address the violence.

Anez said on Friday that Morales was free to return to Bolivia but would have to respond to allegations of electoral fraud and would not be immune from investigation.

Morales resigned after an Organization of American States audit found electoral irregularities and the military withdrew its backing and urged him to step down to help restore calm.

In the first sign of a potential breakthrough, lawmakers from Morales’ party said they reached an agreement with the interim government late on Thursday to work toward a new presidential election.

Anez has said Morales could not be a candidate in that election.

“Nobody has thrown him out, but yes, there’s a need for him to respond to accusations of electoral fraud, as well as many allegations of corruption,” Anez told reporters at the presidential palace.

Morales told Reuters in an interview in Mexico on Friday that elections could be held without him. But no candidate from his Movement for Socialism (MAS) party has yet emerged to replace him.

Additional reporting by Sarah Marsh in Havana. Published by Reuters .com on November 15, 2019. Reprinted here for educational purposes only. May not be reproduced on other websites without permission from Thompson Reuters.

UPDATE ON THIS ONGOING STORY — (From a Nov. 18 Reuters report by Daniel Ramos):

Bolivia’s interim president Jeanine Anez was forced to suspend a trip out of the capital La Paz planned for Monday (Nov. 18), a government spokesman said, after a threat on her life by a “criminal group.”

Anez, 52, had been due to travel to her native Beni province in northeastern Bolivia but the trip was cancelled because of a credible threat, Interior Minister Arturo Murillo said at a news conference in La Paz.

Both Cuba and Venezuela were close allies of socialist former president Evo Morales, who stepped down last week amid violent protests and accusations of vote-rigging in an Oct. 20 presidential election. An Organization of American States audit found irregularities in the vote.

Morales fled to Mexico but his supporters have since taken to the streets, sometimes armed with homemade weapons, barricading roads and skirmishing with security forces.

A total of 23 people have died in the unrest so far, according to a government human rights institution.

The roadblocks have caused a food and fuel crisis, resulting in long lines outside grocery stores in La Paz. A general strike called for Monday appeared by midday to have fallen flat.

Anez, a conservative former senator, took over last Tuesday. She has promised to build bridges with Morales’ Movement for Socialism (MAS) party and hold fresh elections, albeit without the participation of Morales, who ran the country since 2006.

1. For BOLIVIA, give the following information:

2. For BOLIVIA:
a) list the who, what, where and when of the news item
b) Why did the interim government issue this order?
c) What were most of the Cubans doing in Bolivia?
d) Why did long-time President Evo Morales resign?
e) How have the governments of Cuba and Venezuela responded to the interim president’s order?
f) What other countries have taken similar action against Cubans in recent months?

Bolivia, named after independence fighter Simon BOLIVAR, broke away from Spanish rule in 1825; much of its subsequent history has consisted of a series of coups and countercoups, with the last coup occurring in 1978. Democratic civilian rule was established in 1982, but leaders have faced difficult problems of deep-seated poverty, social unrest, and illegal drug production.

In December 2005, Bolivians elected Movement Toward Socialism leader Evo Morales president – by the widest margin of any leader since the restoration of civilian rule in 1982 – after he ran on a promise to change the country’s traditional political class and empower the nation’s poor, indigenous majority. In December 2009 and October 2014, President Morales easily won reelection. His party maintained control of the legislative branch of the government, which has allowed him to continue his process of change. In February 2016, Morales narrowly lost a referendum to approve a constitutional amendment that would have allowed him to compete in the 2019 presidential election. However, a 2017 Supreme Court ruling stating that term limits violate human rights has provided the justification for Morales to be chosen by his party to run again in 2019. (from CIA World FactBook)

Mr. Morales is already the longest-serving president in Bolivian history and another term would give him 19 years in power. This campaign, though, was a challenge for the leader, who faced growing resistance over corruption concerns and what critics contended was his tightening grip on power.

Mr. Morales is among the last of the “pink tide,” a generation of Latin American leftists swept into power since the late 1990s on pledges to redistribute wealth and halt corruption.

Mr. Morales can point to accomplishments that include delivering stability in a nation accustomed to military dictators and fragile, short-lived civilian administrations.

Mixing market-oriented policies with revolutionary, anti-U.S. rhetoric, he has overseen economic growth exceeding 4% a year on average since he took office in 2006, making Bolivia the envy of many of its neighbors. His government built roads and hospitals. Poverty fell by about half in a country that had long been the continent’s poorest.

But growing dissatisfaction with Mr. Morales’s rule helped propel Mr. Mesa and other opposition candidates. Mr. Morales’s Movement Toward Socialism party dominates all branches of government and controls much of the news media, according to press-freedom groups. Bolivians protested after judges ruled that a constitutional prohibition on running for a fourth term violated the president’s human rights.

“He should not even be a candidate, but that’s how dictatorships work,” said María Ángela Alvizuri, a 38-year-old homemaker in La Paz. “This is not democracy.”