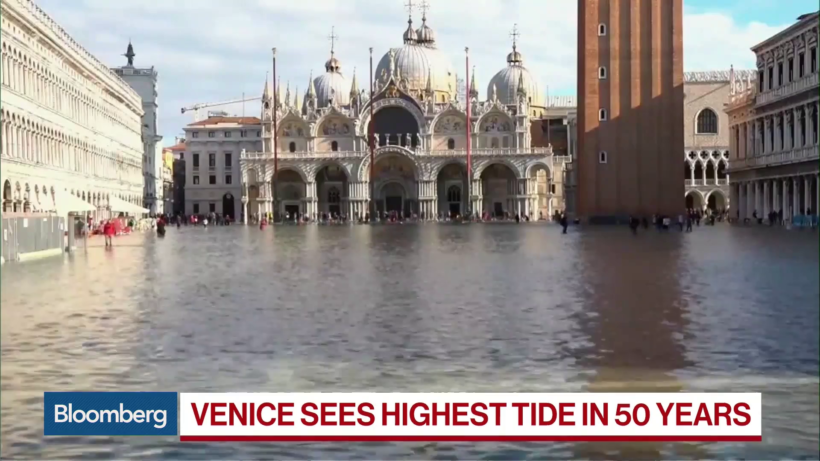 (by Clare Speak, The Local) – Last Tuesday (Nov. 12), the city of Venice was devastated by a particularly intense acqua alta, or high water, the name given to exceptionally high tides in the Adriatic Sea, which peaked at 1.87 metres (six feet) – just short of the 1.94 metre record set during the “great flood” of 1966.

But while this week’s flood is the worst the city has seen in half a century, it isn’t entirely unexpected. Late autumn and winter is the season for acqua alta in Venice, and there were similar scenes of devastation at the end of October last year, when another unusually high tide flooded the lagoon city.

The mayor of Venice, Luigi Brugnaro, is this week among those blaming the floods on climate change, while environmental groups [claim] such incidents can only be expected to happen more frequently in future.

Both Venetian locals and visitors are now asking why, particularly if the floods are fairly predictable and supposedly expected to worsen, more isn’t being done to protect the lagoon city.

Specifically, they ask what’s happened to the multi-billion-euro flood barrier system for Venice [that was first introduced in] 1991.

Furious Venice residents lashed out at authorities on Wednesday, saying this week’s devastating flood could have been prevented if only the long-awaited flood defense system, known as Mose (meaning Moses), had been put in place as promised.

“They’ve done nothing, neglected it. It doesn’t work and they have stolen six billion euros. The politicians should all be put in jail,” Venice resident Dino Perzolla, 62, told AFP.

Politicians themselves said the barrier would have stopped the flooding. Mayor Brugnaro as well as Veneto regional president Luca Zaia were among those blaming the lack of flood defenses for the “apocalyptic “ situation in Venice, telling Italian media on Wednesday that “half the city is under water because Mose is not yet active.”

The system of flood defenses, comprised of 78 gates that can be raised to protect Venice’s lagoon during high tides, is one of the biggest civil engineering projects in the world.

Mose has, so far, cost upwards of 5.5 billion euros, and has long been mired in cost issues, delays, corruption scandals, and criticism. 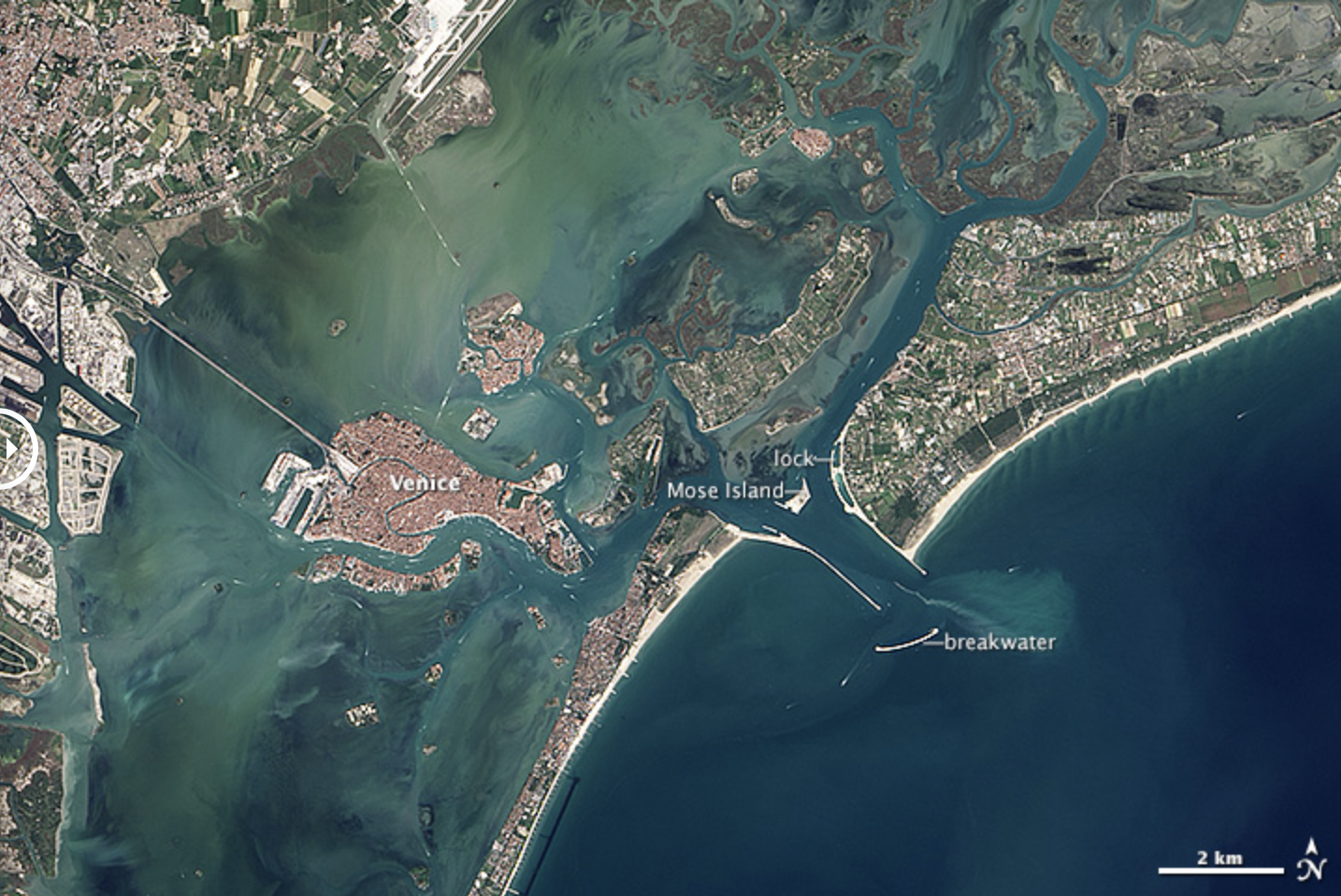 After construction work on the barrier began in 2003, the original completion date was set for 2014, then 2016, and the latest official estimates now say the barrier system will be ready to use by the end of 2021.

Construction work on the barrier is 94 percent complete, according to the company building it, Italian newspaper Il Post reported on Wednesday.

But recently, the project has been plagued by technical problems. An attempt to test part of the barrier earlier this month caused worrying vibrations, and engineers discovered underwater parts had rusted, stalling the project further.

In fact, some reports say the rusting and leaking found on existing parts of the barrier system is so serious that it could take a decade to repair.

The metal hinges, supposed have a 100-year lifespan, are reportedly rusting after less than ten years under water.

The La Nuova Venezia newspaper reported in July 2019 that the Consorzio Venezia Nuova – the group of companies responsible for building the barriers – and the government-appointed supervising body, the Provveditorato, was putting contracts out to tender for the repair work on the rusting hollow steel gates, which are attached by hinges to concrete bases sunk into the bottom of the lagoon.

The Provveditorato reportedly says these structures are already “seriously degraded,” and that inspection corridors inside the concrete foundations are also leaking, meaning parts will have to be replaced.

The report says this repair work is estimated to take ten years and cost €34 million.

It’s not clear whether this will mean Venice has to wait longer for the gates to become operational, or whether the work can be done while the barriers are on standby to be raised. …

While it’s debatable whether the barriers will actually work as hoped, and it’s impossible to say when or even if Venetians can expect to see the barriers in operation, the only real certainty for now is that work on the project will continue.

Published by Italy’s thelocal .it on November 13, 2019. Reprinted here for educational purposes only. May not be reproduced on other websites without permission from The Local.

1. For ITALY, give the following information:

2. For ITALY:
a) list the who, what, where and when of the news item
b) The water crested at 6 feet in Venice. What was the record flood in Venice?
c) What is the acqua alta? Why is flooding not entirely unexpected?
d) What is Mose? When did construction begin? How much has been spent thus far? What were the completion dates? Why does the date of completion keep getting pushed up a few years at a time?
e) Consider this from a CBS 60 Minutes report:

Amsterdam is a city known for its canals. Waterways encircle the city’s historic center like a kind of belt, providing picturesque views of boats and urban reflections. Even though Amsterdam sits almost entirely below sea level, the city never floods. As Bill Whitaker reported on 60 Minutes, the Dutch have taken extraordinary precautions to prevent flooding and allocate more than a billion dollars each year to manage their flood infrastructure. …

Venice, too, is famous for its characteristic waterways. But it’s also known for its narrow brick streets inadvertently turning into small rivers more than 100 times a year. In 2001, correspondent Bob Simon reported on a new effort aimed at preventing this deluge of water, a system of gates then called Project Moses.

The gates are similar to the Dutch system. In the Netherlands, two enormous arms seal off the Rhine River and Rotterdam from the North Sea. In Venice, the system will employ mobile gates at the three openings to the lagoon which surrounds Venice. The gates can sit idle in the water during low tide, then during storms, they can be raised to provide a barrier between the lagoon and the Adriatic Sea.

But as Simon reported, …squabbling between Italy’s politicians had kept the system mired in debate for years.

…Simon reported, “It took nearly 20 years for Project Moses to be drawn up, and Italy has been arguing about it for the past 10. And Venetians … fear it will take another disastrous flood to shake Italy’s politicians.” …

Work on MOSE began in 2003, more than 20 years after the proposal was submitted — but after countless delays, it’s still incomplete. According to the Italian newspaper La Stampa, the project, which has already cost 5.5 billion euros (approximately $6.5 billion), is now expected to be completed in 2022. For comparison, the Dutch gates took just six years to build and cost $500 million.
(from a July 2019 CBS 60 Minutes report by Brit McCandless Farmer)

Venice’s mayor – Luigi Brugnaro, blames climate change for the flooding. Others blame politicians, pointing out that engineers in the 21st century are able to design a fix (as Amsterdam has proved) to prevent a city from flooding. What is your reaction to this?

Will the barriers actually stop Venice from flooding?

The project has been controversial from the beginning, and opinion remains divided over whether the Mose system, when ready to use, will really be able to prevent the city from flooding as hoped.

While citizens have long worried about the astronomically high cost of construction, NGOs, engineering firms, academics and the municipality of Venice itself have long questioned the project’s viability and the barrier’s stability in the face of rising sea levels [or record flooding as is the case this month].

One analysis of the project in 2015 concluded that “The MOSE gates cannot face a sea-level rise because they are not a water tight barrier. Their oscillations with waves will enlarge the spaces between the gates and will permit sea water to raise the lagoon level even when the gates are closed.” (from The Local article above) 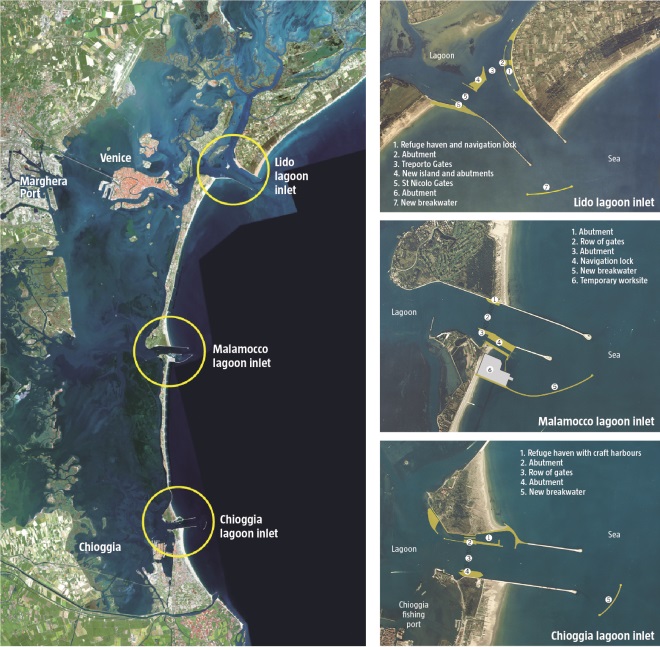