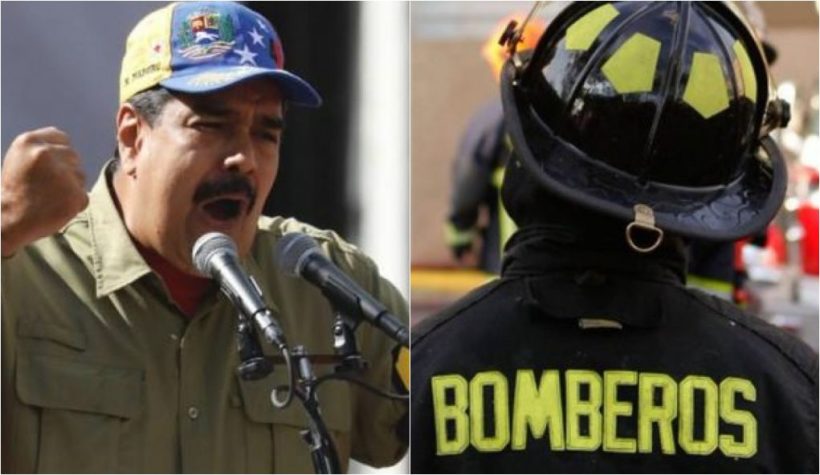 (by Alexandra Ulmer and Shaylim Castro, Reuters) CARACAS – Two Venezuelans firefighters who made a viral video portraying President Nicolas Maduro as a donkey were jailed on Sunday pending trial on charges of inciting hate and could face up to 20 years in prison if convicted, right groups said.

Ricardo Prieto, 41, and Carlos Varon, 45, were arrested by military counterintelligence officers on Wednesday at the fire station where they worked in western Merida state, according to the human rights observatory of the University of the Andes in Merida, which is tracking the case.

The pair appeared on Sunday before Judge Carlos Marquez, who ordered they be held for trial on charges of violating a law against fomenting hatred that was passed last year [by Maduro’s constitutional assembly], the observatory and the Penal Forum rights group said.

Opponents of the leftist Maduro, who blame him for Venezuela’s economic meltdown, have long dubbed him “Maburro” in a play on the Spanish word for donkey, “burro.” [Maduro is widely unpopular, overseeing the once-wealthy oil-nation’s plunge into a deep economic crisis. A shortage of food and medicine is driving mass migration across its borders.] Maduro’s administration did not respond to a request for comment on the case. Reuters was not immediately able to contact Prieto and Varon or their lawyers.

In the video, one man leads a donkey through a Merida fire station while another talks to the animal as if he is guiding the president on one of his many official visits to schools, hospitals and army bases that are shown on state television. The video appears to be making fun of the fawning coverage of President Maduro on state TV “news” reports.

“Good evening comrades, as you can see we are receiving the visit of President Maduro. He is doing an inspection,” the man filming says in the video, as the donkey slowly walks through a dimly lit, spartan fire station.

As the donkey chews on a verdant patch overlooking a valley, the narrator says, “He is checking whether the grass is in a good state or not.”

“He is indicating that the grass is good – that is the only good thing we have here at the station,” the narrator says, alluding to the recession. “Now go to the bathroom, so you can see the conditions. Or the kitchen.”

The men’s lawyers said the firemen made the video as a joke and not to incite hate, Toro said, relating Sunday’s hearing.

Rights group say that Maduro has led a crackdown on dissent, with Penal Forum estimating there are currently some 234 political prisoners in Venezuela. Maduro [claims] he is confronting an armed insurrection that is designed to unseat his socialist government and usher in a U.S.-controlled puppet regime.

2. For VENEZUELA:
a) list the who, what, where and when of the news item
b) What charge has been brought against the two firemen for their video making fun of socialist President Maduro?
c) What punishment do the two face?
d) From wikipedia: “A political prisoner is someone imprisoned because they have opposed or criticized the government responsible for their imprisonment.”  How many political prisoners are in Venezuela today?
e) What do you think will happen to the Veneuzeulan firefighters for making fun of socialist President Maduro and the fawning coverage he receives in the state-run media?

Constitutional Assembly in Caracas passes vague new law clamping down on ‘hate’ in the media:

Venezuela’s all-powerful pro-Maduro constitutional assembly passed a wide-reaching law Wednesday [in November] that clamps down on social media and broadcasters alike by ordering prison sentences of up to 20 years for anyone who “instigates hate.”

The law…prohibits Venezuelans from spreading any message through television, radio or social media that instigates violence or hate. …

Government backers seem to be mainly interested in controlling social media and broadcasters, with the law making only a brief mention of newspapers. Print publications are obliged to print the anti-hate law.

The measure drew swift criticism from international human rights advocates, who said the law cracks down on dissent by criminalizing peaceful protests, the hallmark of a democratic society. “The law seeks to end free speech in social media — a key space for Venezuelans to express themselves in a country with shrinking free speech avenues,” said José Miguel Vivanco of the New Yorkbased Human Rights Watch.

The law requires administrators of social media accounts to immediately remove any hateful posts. It also calls for the creation of a commission to enforce the anti-hate law, which carries punishments of 10 to 20 years in prison.

Watch the video the men were arrested for making: