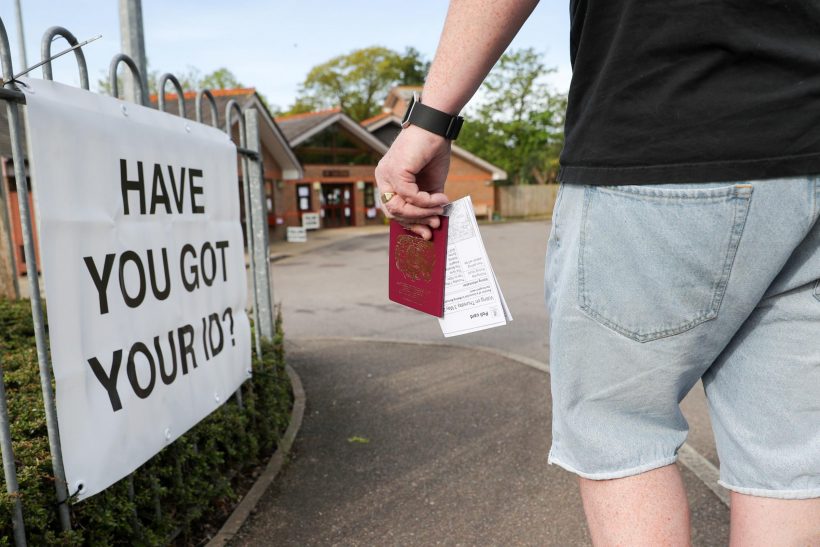 A voter carries his passport along with his poll card in Knaphill, Woking (Andrew Matthews/PA)

(by Alexander Zhang, The Epoch Times) — The UK government plans to introduce requirements for voters to show photo ID when casting ballots, in order to ensure the integrity of elections.

The Electoral Integrity Bill, which requires voters to show identification before being issued with a ballot paper in a polling station, is part of the Conservative government’s legislative agenda set out in the Queen’s Speech on Tuesday. [The party first announced the bill in 2019, which included a voter ID mandate for 2023].

“Everyone wants to maintain the integrity of our democracy and this would bring us in line with not only Northern Ireland but countries such as Canada, many European countries including France, the Netherlands, Sweden—all require a form of identification to vote,” the spokesman said.

The main opposition Labour [liberal/progressive] party accused the government of trying to make it harder for people to vote.

… Voters casting their vote in polling stations in Great Britain currently do not need to present any form of identification before receiving a ballot paper [they are only asked to confirm their name and address], but identification has been a requirement in Northern Ireland, also part of the UK, for nearly 40 years.

Voter ID requirements were introduced in Northern Ireland after the 1983 General Elections following concerns about the extent of voter fraud in the British province. Since 2003 photo ID has been required.

According to a briefing paper for the House of Commons, [which is similar to the U.S. House of Representatives],

“There has been no evidence that the ID requirements in Northern Ireland have affected turnout.”

Since 2014 the Electoral Commission has recommended that photo ID should be required in the rest of the UK.

The Commission recommends that any system of voter ID introduced in Great Britain should mirror that in Northern Ireland, where voters without access to approved photo ID can apply for a free photo electoral ID card from their local council.

Published at the theepochtimes .com on May 11, 2020. Reprinted here for educational purposes only. May not be reproduced on other websites without permission.

2. a) For what reason has the majority Conservative Party proposed the legislation?
b) When and by whom was this requirement first recommended for the UK?

4. For what reason does the main opposition Labour Party oppose the proposed requirement?

6. What recommendation did the UK’s Electoral Commission make for voter ID?

7. The ACLU and other U.S. progressive (liberal) civil rights groups said the requirement for voter ID “amount to Republican-style voter suppression and are likely to erode faith in the democratic process.”

In March 2021, Rasmussen Reports released a poll showing that 75 percent of Americans support voter ID laws, including 60 percent of Democrats and 89 percent of Republicans. In addition, 74 percent of whites, 69 percent of blacks, and 82 percent of other minorities said they were in support of requiring voter ID.

Many other countries require some form of ID to vote. For example: Canada requires voter ID. Mexico’s “Credencial para Votar” has a hologram, a photo, and other information embedded in it, and it is impossible to effectively tamper with. Confidence in the integrity of elections has soared since its introduction in the 1990s.

What do you think: does requiring voters to show proof that they are who they say they are ensure the integrity of elections (one person one vote) or does it suppress voters (prevent them from voting)?

8. Watch the videos. What is your reaction to the people answering questions about ID?

UK to introduce plan to require IDs to vote in elections:

On May 11, Queen Elizabeth announced the U.K. government would introduce legislation to strengthen the country’s elections, confirming planned measures to mandate photo identification while voting.

In her speech announcing the Conservative Party agenda, Queen Elizabeth said, “My Government will strengthen and renew democracy and the constitution. Legislation will be introduced to ensure the integrity of elections, protect freedom of speech and restore the balance of power between the executive, legislature and the courts.”

Although Queen Elizabeth did not describe it specifically as voter identification, Prime Minister Boris Johnson, a member of the legislative majority Conservative Party, first announced the planned Electoral Integrity Bill in 2019 which included a voter ID mandate for 2023, Forbes reported.

MarketWatch also reported the election integrity measure would require people to show identification to vote in U.K. elections beginning in 2023. Currently, people in most of the U.K. can vote at their local polling station by confirming their name and address. Voters in Northern Ireland are required to show a photo ID and have since 2003.

The ACLU opposes Voter ID laws. An ACLU fact sheet states: “Voter ID laws deprive many voters of their right to vote, reduce participation, and stand in direct opposition to our country’s trend of including more Americans in the democratic process. Many Americans do not have one of the forms of identification states acceptable for voting. These voters are disproportionately low-income, racial and ethnic minorities, the elderly, and people with disabilities.  Such voters more frequently have difficulty obtaining ID, because they cannot afford or cannot obtain the underlying documents that are a prerequisite to obtaining government-issued photo ID card.”