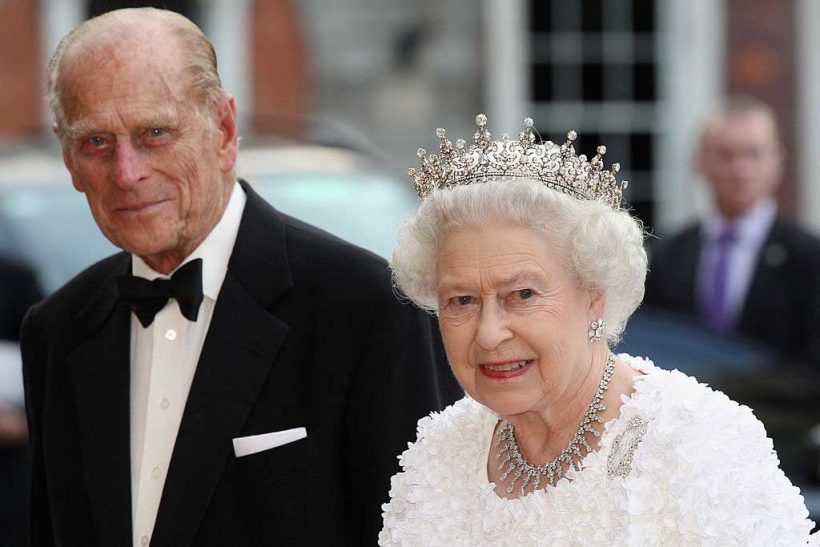 (by Danielle Haynes, UPI) — Millions of people around the globe watched Saturday as Prince Philip, the longest-serving consort of a British monarch, was laid to rest at Windsor Castle in a small funeral limited by COVID-19 restrictions.

The funeral began around 9:30 a.m. EDT as the duke of Edinburgh’s coffin was taken from the private chapel at Windsor Castle to nearby St. George’s Chapel. The coffin, draped with Philip’s family crest, his Royal Navy cap and sword, and a bouquet of flowers, rode atop an open-bed Land Rover customized by the duke.

None of the royal family wore military uniform, a break from tradition.

Queen Elizabeth II, who was married to Prince Philip for more than 73 years, rode behind the coffin in a vehicle along with her lady-in-waiting. 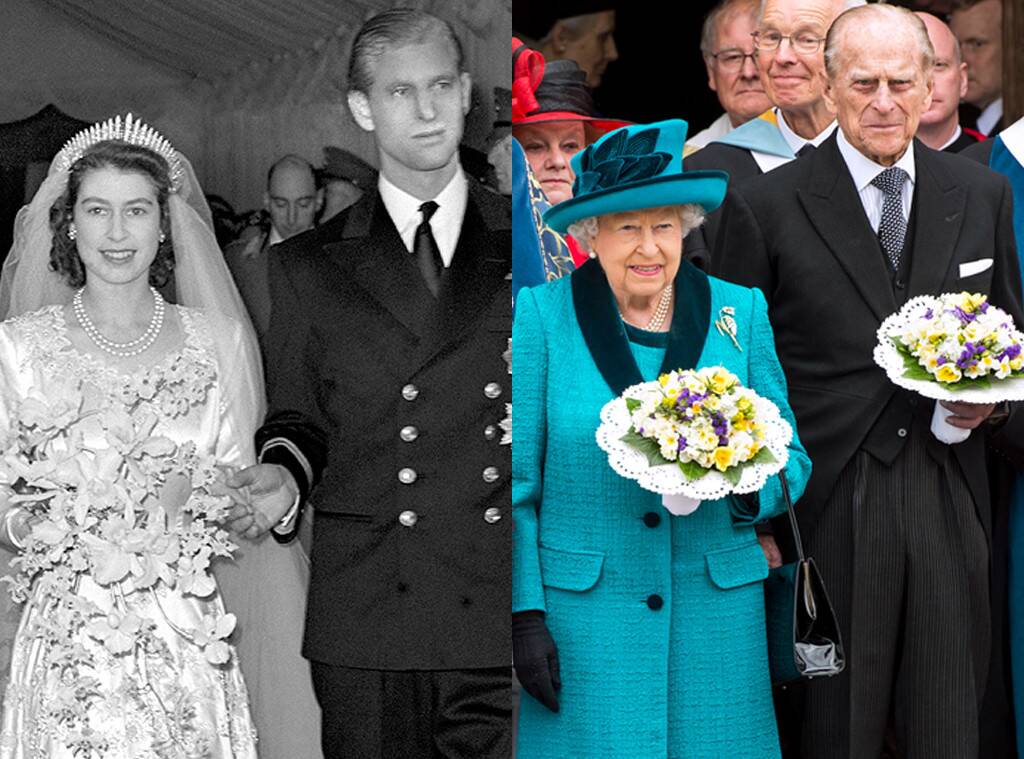 Then-Princess Elizabeth and Prince Philip on their wedding day, Nov. 20, 1947, and in a recent photo.

The Band of the Grenadier Guards led the procession to the chapel.

Once at St. George’s, there was a national minute of silence followed by a private funeral service led by the archbishop of Canterbury. The service was limited to 30 people due to COVID-19 protocols.

Members of the royal family were spread out inside the chapel, married couples sitting together but well apart from others. The queen sat alone in the first pew, closest to the archbishop’s left.

The archbishop read a number of prayers and passages from the Bible, and a choir sang “Eternal Father Strong to Save,” [a British hymn traditionally associated with seafarers, particularly in the maritime armed services ], “Jubilate in C” and “Melita,” among other hymns chosen by the duke.

Philip’s coffin was interred in the royal vault at the chapel, but will be relocated to the smaller vault of King George VI, the queen’s father, after she dies. Both Prince Philip and Queen Elizabeth II will be buried with King George VI, his wife, Queen Elizabeth, and Princess Margaret (the Queen’s sister).

Prince Philip died April 9 at the age of 99 at Windsor Castle after spending weeks in London hospitals for an infection and an unspecified heart procedure.

Published at UPI .com on April 17, 2021. Reprinted here for educational purposes only. May not be reproduced on other websites without permission.

3. a) In what branch of the British military did Philip serve?
b) Why did he resign his position?

4. What naval song was sung at Prince Philip’s funeral service?

5. Read through the Order of Service for the funeral of Prince Philip, Duke of Edinburgh, (under “Background” below), then watch the videos under “Resources.” What is your reaction to the focus and tone of the funeral service?

6. Dominic Green of The Spectator wrote in a commentary on Prince Philip:
“Philip exchanged a life of action — he was tipped to rise to the top of the Navy — for one of service. He supported Elizabeth II through 14 prime ministers and always called her “Ma’am” in public. He carried out 22,000 public engagements before taking “early” retirement at the age of 96. He sometimes bristled against the stuffiness of protocol, but he got on with the job because that was what you did. … Philip did the right thing because that’s what people did in his day. He did his duty.”
What do you think of this depiction of Prince Philip?

Prince Philip joined the Royal Navy in 1939, when he was still a teenager. By 1942, three years after the start of the Second World War, he had risen to the rank of First Lieutenant.

He bravely fought in the Battle of Crete and the conflict at Cape Matapan. He was decorated for bravery when he distracted Nazi pilots during a 1943 bombing raid by launching a raft with smoke floats.

He was also Mentioned in Dispatches for his ‘alertness’ in using a searchlight to spot enemy ships during nighttime conflict at sea.

Philip went on to command the frigate HMS Magpie for two years, from 1950 until 1952, when he was forced to give up his naval career after the then Princess Elizabeth acceded to the throne following the death of her father, King George VI.

The Duke then maintained his strong military links by serving as Captain General of the Royal Marines for six decades until his retirement from royal duties in 2017, when the role was handed to Prince Harry.   [As many people do, Prince Philip chose the songs for his funeral, including]:

The song Eternal Father, Strong To Save is strongly associated with the Navy in the UK, but is also popular with the naval traditions of countries like the US and France.

The first verse of the hymn paints a dramatic picture of divine help needed for those who find themselves in trouble on the waters.

The stirring lyrics and music were written by two English ministers – William Whiting providing the words and John B Dykes composing the music.

The song adaptation of Psalm 104, which was originally composed as a cantata in three movements, was set to music by guitarist and composer William Lovelady at Prince Philip’s request was also sung.

The whistles Action Stations is played on a warship to signal all hands should go to battle stations and is sometimes featured at funerals of naval men. 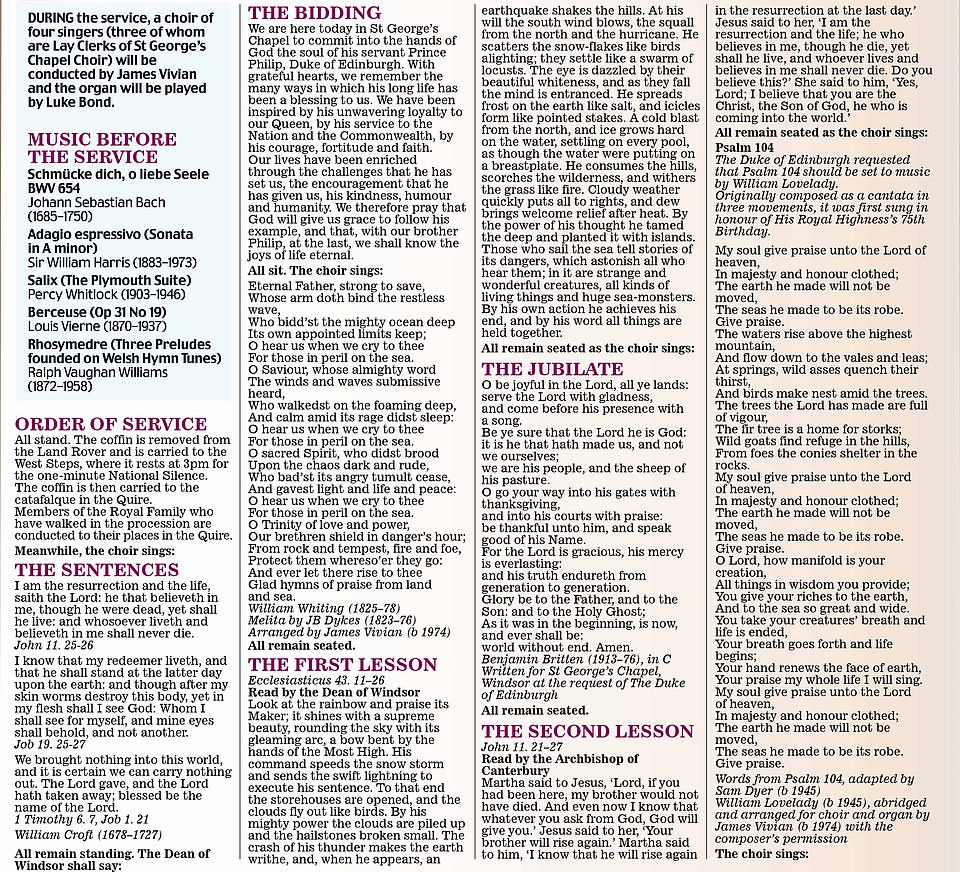 The Order of Service for Prince Philip’s funeral service. 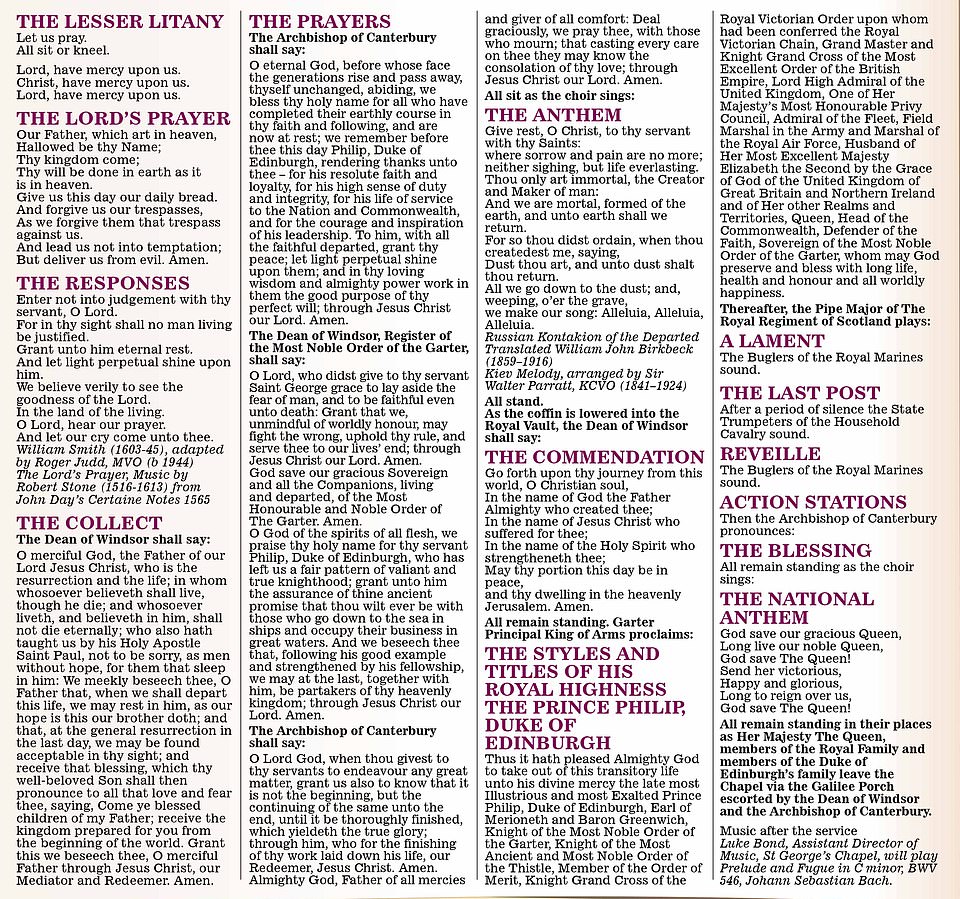 The Royal Family YouTube channel – The Duke of Edinburgh Laid to Rest in Touching Funeral Service Inside St George’s Chapel
Prince Philip was interred in the Royal Vault at St George’s Chapel, inside the grounds of Windsor Castle, during a funeral that honored his lifetime of service to the UK, the crown and his wife of 73 years, Queen Elizabeth II.