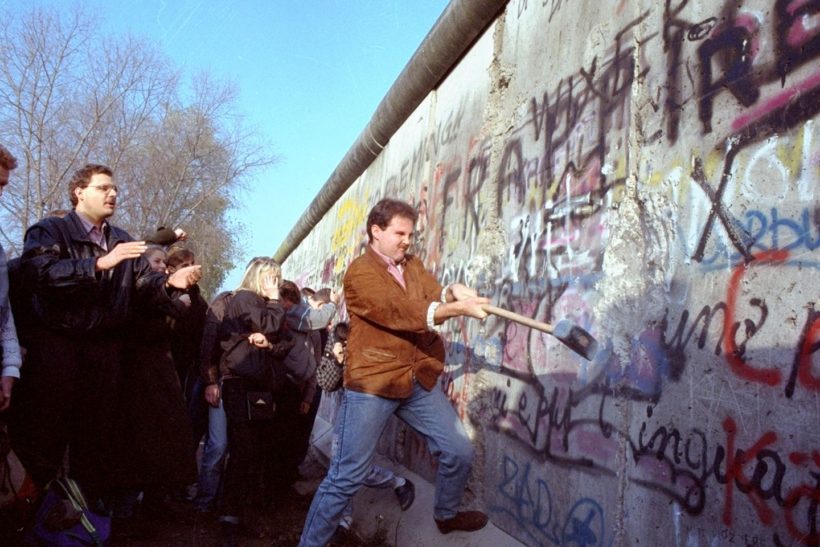 A West Berliner swings a sledgehammer, trying to destroy the Berlin Wall near Potsdamer Platz in Berlin on Nov. 12, 1989. (Associated Press/File)

(by Elena Gyldenkerne, Reuters) BERLIN — Sascha Moellering witnessed the fall of the Berlin Wall at the Brandenburg Gate on Nov. 9, 1989. But it took about another 10 years for the border between the communist East and the democratic free West to come down in his mind.

His mother was watching television at home and saw images of people shaking fences at the border after Guenter Schabowski, a senior East German communist official, accidentally announced the opening of the wall at a news conference.

“At some point my mother looked at me and asked: ‘What are you doing here? Go! This is history! And you have to go’,” Moellering recalled ahead of the 30th anniversary of the event which ultimately led to German reunification.

“There were a few thousand people standing on the wall singing and dancing to Beatles songs, ‘Give peace a chance’, of course, and the mood was really great,” he said. 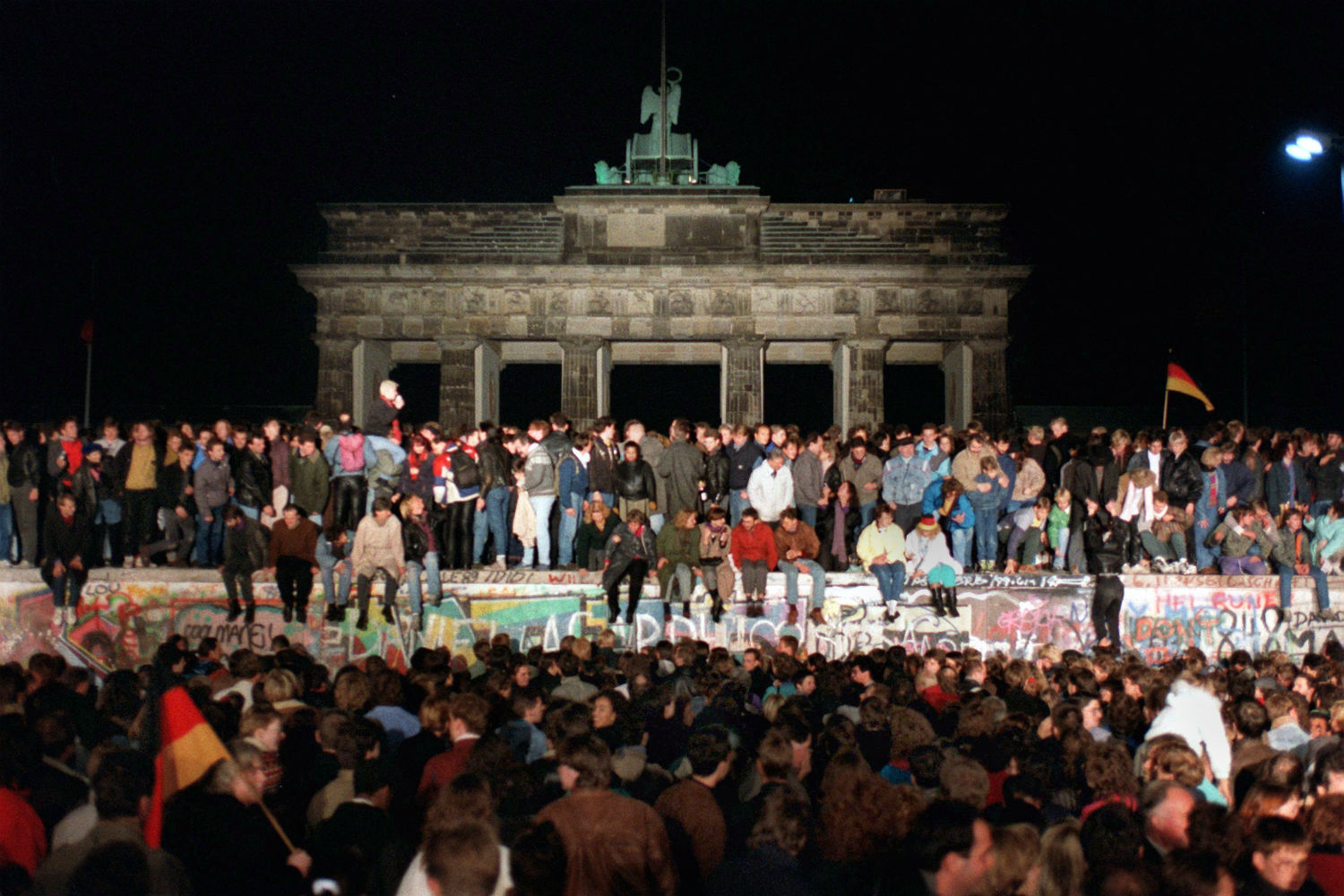 Pressure had been building on the East German government for months to let its citizens travel freely when Riccardo Ehrman, a journalist at Italy’s ANSA news agency, asked a clearly underprepared Schabowski about current travel rules.

Stumbling over his words, Schabowski said the East German government had decided to let citizens leave through any of the border crossings – and he believed the new rule would take effect immediately. Dumbfounded and euphoric East Germans rushed to the border to get a glimpse of the West.

“I am not sure that I really contributed but maybe, if I did help it a very, very little bit, I am incredibly proud,” Ehrman told Reuters.

It later turned out that the announcement was not supposed to be made until 4 a.m. the following day. Schabowski had also meant to say East Germans could apply for visas (to leave) in an orderly manner.

Hans Modrow, the last Communist premier of East Germany, was taken by surprise.

“I was walking when a young man came to me and said ‘Have you heard? The border is open!’ (And I asked) ‘Where does that come from?’ (And he said) ‘Yes, the border is open, should I go?’ And I said: ‘Why would you go?’,” he told Reuters.

Susanne Roebisch, who was from East Berlin but was one of the few who managed to get permission to move to West Berlin with her family in 1985, remembers saying goodbye to everyone she knew as a 14-year-old, never expecting to see them again.

They got a shock when they heard the wall had been breached.

“We all sat there, thinking: ‘What? The wall is open now? Was that a clear statement? Did he say everyone can go from East to West and West to East? What?’,” she said.

Her father, who kept a detailed diary, made a note in the page for Nov. 9, 1989 reading: “The border is open”. The entries for the following days show they received a steady stream of visits from family and friends who lived in the East.

But while the physical wall came down quickly, it has taken much longer for Germans to feel like East and West have really become one country. … 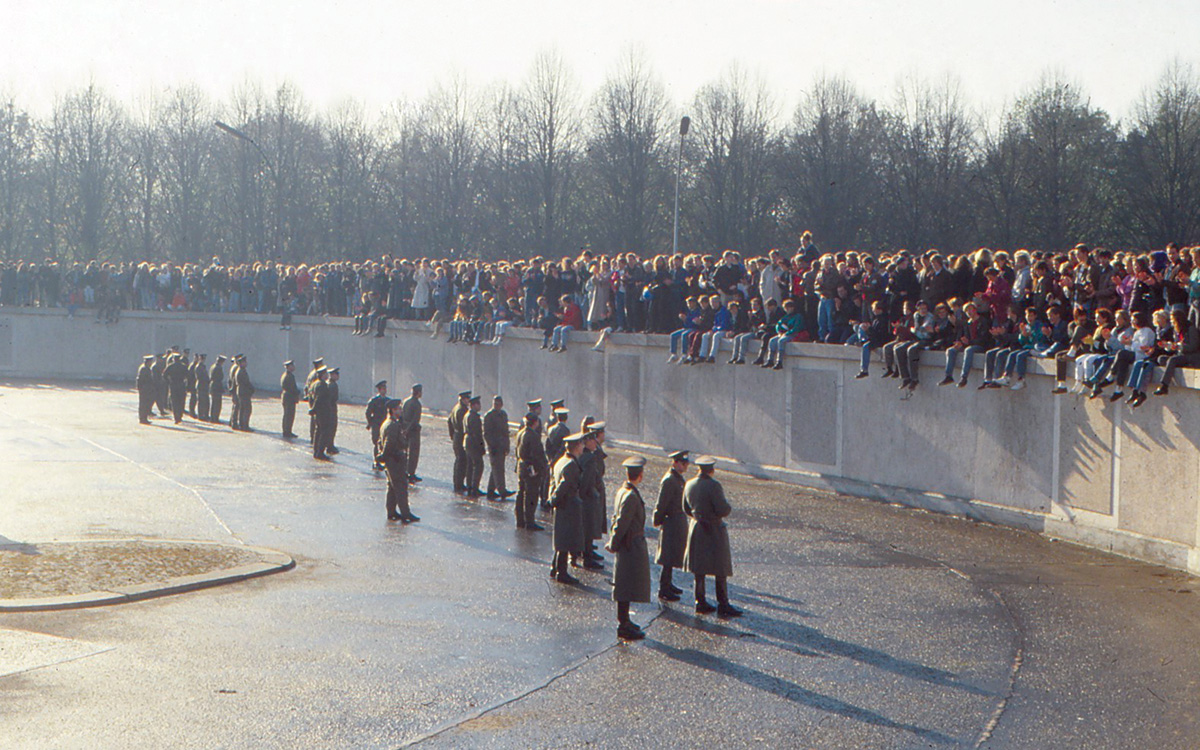 A view of the east side of the wall at the Brandenburg Gate, with West Berliners perched atop the barrier overlooking the East German police on Nov. 10, 1989. (Michael Hammer)

Helmut Kohl, the chancellor who united Germany, pushed through political union. But factors including outdated economic structures [in East Berlin] and a way of life imposed on citizens by communist rule, have hampered integration.

Moellering said it took him a long time to see East Berlin as part of Berlin. “The feeling – as a young boy who grew up sheltered in Lichterfelde, on the other side of the town – was that it [the East] was a completely different world.”

“It took me about ten years to erase the border in my head.”

Writing by Michelle Martin. Published by Reuters .com on November 4, 2019. Reprinted here for educational purposes only. May not be reproduced on other websites without permission from Thompson Reuters.

2. For GERMANY:
a) What was unusual about the Berlin Wall? What the purpose of the Berlin Wall?
b) Who built it? When was it built?
c) What was the Brandenburg Gate?
d) What were the Stasi?
e) What was Checkpoint Charlie?
f) How/why did the wall come down?
g) What role did President Ronald Reagan have in the fall of the Berlin Wall?
CHALLENGE: Watch the videos and check out the links under “Resources” below the questions. What two facts impressed you most about the people who never stopped trying to escape from communist East Germany to the freedom of West Germany?

THE BERLIN WALL:  The Berlin Wall was a wall in Berlin, Germany that separated Communist East Berlin from democratic West Berlin. It was one of the most visible symbols of the Iron Curtain. The wall was [constructed overnight] in 1961 by the government of the German Democratic Republic (East Germany) to stop the tide of emigration to West Berlin. …

The symbolism of the wall as a representative of the divide between capitalism and communism was not lost on American President Ronald Reagan, who, in a famous 1987 speech, urged Soviet President Mikhail Gorbachev to “tear down this wall!” These words proved prophetic, on November 9, 1989 the German Democratic Republic announced that the border would be re-opened. The wall was promptly destroyed. In the following year the parliament of the German Democratic Republic voted for reunification and became new states (Bundesländer) of the Federal Republic of Germany.

CONSTRUCTION OF THE WALL:  The Wall was erected overnight on August 13-14, 1961. This was a Saturday night and most Berliners slept while the East German government began to close the border and install barbed wire fences through Berlin. The first concrete sections were installed on 15 August 1961, and over the following few months the concrete block sections were extended. In June 1962 the wall was further consolidated, and in 1965 the “third generation” of Wall replaced this earlier construction. Consisting of concrete slabs between steel girder and concrete posts with a concrete sewage pipe along the top, this was itself replaced in many areas after 1975 with newer concrete segments which were more resistant to breakthroughs.

ESCAPE ATTEMPTS:  East Germany jailed more than 75,000 people who tried to flee to the West across the Wall, and 809 died in escape attempts. Of those who died, 250 were killed at the Berlin Wall itself; 370 died on the border between East and West Germany; and 189 had been trying to get out via the Baltic Sea. An average of seven people were jailed every day for trying to get out between 1961 and 1989. Many thousands of East German border guards (Grenztruppen, known colloquially as “Grenzers”) also tried to escape, and around 2,500 succesfully made it to the West. However, 5,500 were captured in the attempt and received an average jail sentence of five years, compared to civilians who were imprisoned for an average of one or two years.

Historians researching the files of the East German communist Stasi (secret police) found that in 1961 they devoted virtually all of their resources and their 50,000 staff solely to stopping people leaving the country. Anyone thought likely to flee was forcibly moved away from border areas. Other people were encouraged to spy on their friends, neighbours and colleagues and inform on them if they were considering an escape. (from conservapedia.com) 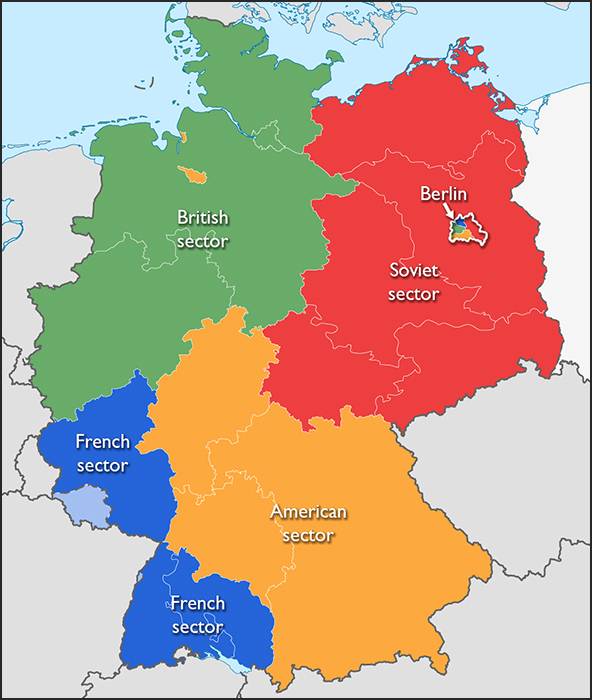 Watch a brief video (with map) “Fall of the Berlin Wall”