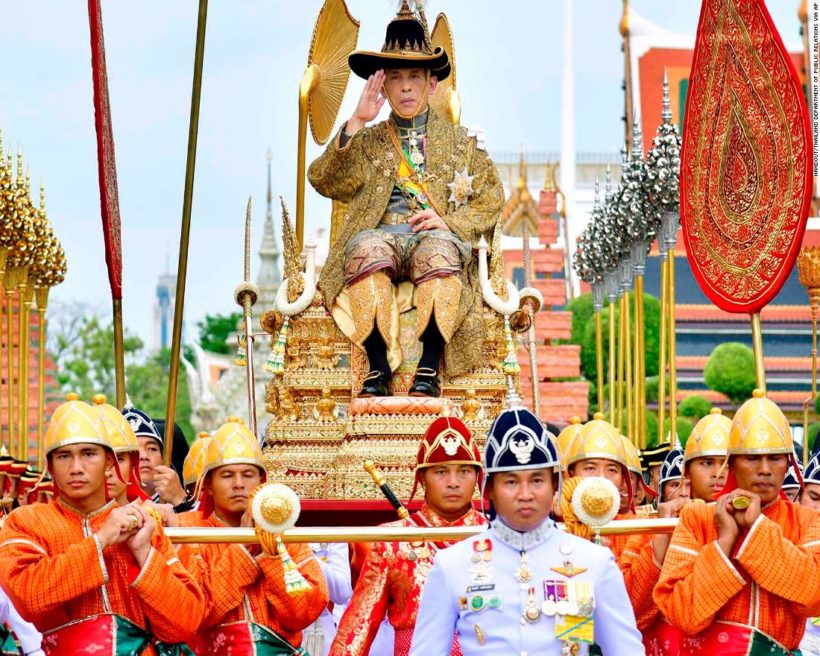 In this photo released by Thailand's Royal Public Relation Department, Thailand's King Maha Vajiralongkorn is transported on the royal palanquin by royal bearers during his visit to the Temple of the Emerald Buddhism, May 4, 2019, in Bangkok, Thailand. Saturday began three days of elaborate centuries-old ceremonies for the formal coronation of Vajiralongkorn. (Thailand's Royal Public Relation Department via AP)

(Compiled from BBC and CNN) – Thailand’s King Maha Vajiralongkorn was crowned on Saturday, the first of three days of coronation rites.

King Vajiralongkorn inherited the throne in 2016 when his long-reigning father Bhumibol Adulyadej died.

Days ago in a surprise announcement the palace said the king had married his long-term partner and royal consort who would now be Queen Suthida.

Thailand has a constitutional monarchy, but the royal family is highly revered by Thais and wields considerable power.

During Saturday’s ceremony the 66-year-old king was handed the 16 lb Great Crown of Victory, which he placed on his head.

He then issued his first royal command, promising to reign with righteousness, as his father had done at his coronation 69 years ago.

Although Thailand’s monarchy hasn’t held absolute power in 86 years, it remains an influential part of Thai life. Pictures of the royals are widely displayed around Thailand and the country’s strict lese majeste laws make it illegal to defame, insult or threaten the king, queen, heir-apparent or regent.  The laws have shielded the royal family from public view and scrutiny.

The coronation comes amid an ongoing period of political instability in the country, which has had two coups in 13 years. In March, Thailand held a national election but its results remain unclear, with both major political parties claiming they are able to form a government.

“The coronation can be seen as an event that would distract Thai people from the current political problems. People are very curious — they haven’t seen a coronation.”

From his ornate gold throne, the King granted an audience to key Thai leaders, including members of the Royal Family, the Privy Council, and the Cabinet, as well as other senior officials.

The three-day coronation will also involve a public audience and the King circling parts of the city on a royal palanquin.

Authorities confirmed to CNN that one billion Thai baht ($31 million) was set aside for the coronation, about one third of the cost of the late King’s funeral in 2017.

Although King Vajiralongkorn has already ruled for over two years, the coronation ceremony solidifies his role as a fully-fledged monarch. The almost three-year gap between the late King’s death in October 2016 and the new King’s coronation isn’t unusual, said Thitinan Pongsudhirak, a Thai political scientist at Chulalongkorn University in Bangkok. King Vajiralongkorn needed time to grieve his father and prepare for the event, he added. The late King Bhumibol reigned for four years before his coronation.

“The official enthronement will solidify kingship and enhance his aura as the new king,” said Thitinan.

In the capital Bangkok, shops are selling portraits of the King as a young man and T-shirts in yellow — the color associated with the monarchy — emblazoned with the words: “Long live the King.” The average price for the shirts is 100 to 200 Thai baht — around $3 to $6. In Thai belief, each day of the week is assigned a color and both the current and late King were born on a Monday, which is associated with yellow. In this image, taken from video, King Maha Vajiralongkorn and Queen Suthida attend attend a ceremony that includes bestowing royal titles and granting ranks at the Grand Palace in Bangkok on May 5.

Who is the king?

King Vajiralongkorn is the second child, and first son, of Queen Sirikit and Bhumibol Adulyadej.

He was educated in the UK and Australia and has been trained at the Royal Military College in Canberra, Australia. He went on to become an officer in the Thai armed forces and is a qualified civilian and fighter pilot.

He became crown prince and official heir to the throne in 1972. He is now known as Rama X, or the 10th King of the Chakri dynasty.

Queen Suthida, who is his fourth wife, is the deputy commander of his personal security unit. She was made a full general in the army in December 2016.

What are the coronation ceremonies?

The coronation rituals began at 10:09, an auspicious time, when King Vajiralongkorn changed into a white robe to go through purification and anointment ceremonies using sacred water that has been collected from more than 100 locations around the country.

He is receiving the five Royal Regalia – the symbols of kingship – which includes the Great Crown of Victory.

Most of the main Brahmin and Buddhist rituals take place on Saturday, and the coronation continues until Monday.

While King Vajiralongkorn has been on the throne since 2016, in Thai tradition he cannot be considered a divine representative on Earth nor the main patron of Buddhism until he is consecrated.

How are Thais marking the occasion?

On Sunday, King Vajiralongkorn took part in a procession around the capital, Bangkok, giving people a chance to celebrate.

Large crowds were expected for this event as well as when he made a public appearance on a balcony at the Grand Palace on Monday.

King Vajiralongkorn has spent most of his time abroad and is not as well known to the public as his father.

But huge portraits of him can now be seen at many buildings after it was made mandatory for state offices to erect them in the weeks leading up to the celebration.

Civil servants were also asked to wear yellow – the colour associated with the king. Many ordinary Thais will also be wearing yellow to show their loyalty to the monarch.

Compiled from May 4 reports at BBC News and CNN. Reprinted here for educational purposes only. May not be reproduced on other websites without permission. 1. For THAILAND, give the following information:

2. For THAILAND:
a) list the who, what, where and when of the news item
b) For how long did King Vajiralongkorn’s father King Bhumibol Adulyadej reign?
c) King Bhumibol died in 2016. Why wasn’t Vajiralongkorn crowned until now?
d) Why is the coronation taking place at a good time for the country?
e) What is your reaction to the elaborate ceremony involved with the king’s coronation?