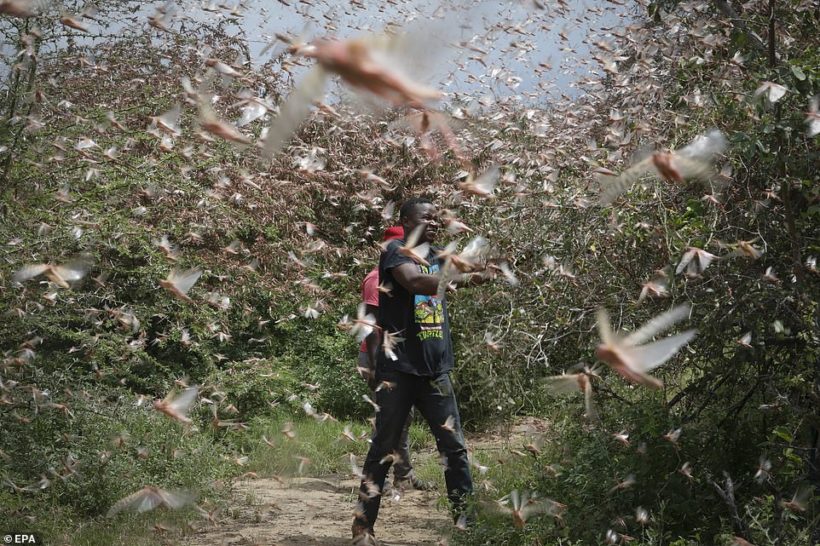 Farmer Theophilus Mwendwa tries to chase away a swarm of desert locusts in the bush, 125 miles east of Kenya's capital Nairobi.

(by Marrit Kennedy, NPR) — The Horn of Africa, one of the world’s most impoverished regions, is being ransacked by billions of locusts. …

The pests crossed the Gulf of Aden and arrived in Somalia and Ethiopia last year. They were spotted in Kenya about two months ago in what has become the worst infestation there in 70 years. …

“These things are voracious,” says Keith Cressman, the U.N. Food and Agriculture Organization’s senior locust forecasting officer. A swarm the size of Manhattan can, in a single day, eat the same amount of food as everyone in New York and California combined, he says.

Swarms of desert locusts more than three times the size of New York City — an estimated 192 billion insects — have been spotted in northeast Kenya, according to Save The Children.

Experts know how to stop the locusts’ spread, but say efforts have been stymied by a lack of resources and because its difficult to spray in conflict-racked places such as Somalia and Yemen.

“We do have a chance to nip this problem in the bud, but that’s not what we’re doing at the moment,” Mark Lowcock, the U.N.’s top humanitarian official, said earlier this month. “We’re running out of time.” …

What’s being done to stop the infestations

The “only effective response,” Cressman says, is aerially spraying pesticide directly on the locusts to kill them. Countries such as Kenya and Ethiopia are actively spraying.

“It’s really important that these control operations are undertaken, but also that they’re upscaled — because it’s not enough,” Cressman says. “The strategy is just to reduce these huge numbers and try to break this continuation of the breeding.”

Right now, the locusts are actively breeding in Kenya, which could lead to a 20-fold increase in populations there in February and March. Depending on the conditions, Cressman expects that “some of them will stay in Kenya, have another generation of breeding at the end of this spring, and others will move northwards.”

A massive increase by the end of March would coincide with the beginning of a planting season for Kenyan farmers. “That means when farmers are planting, they will have the potential to be surrounded by an awful lot of hungry swarms,” Cressman says, which could delay planting season and impact their food security and livelihoods.

If control efforts fail, swarms of desert locusts are likely to re-invade Ethiopia and Somalia. And the timing of yet another generation of locusts could coincide with the harvest in Kenya.

Published by NPR .com on February 21, 2020. Reprinted here for educational purposes only. May not be reproduced on other websites without permission from NPR.

2. In what countries have the locusts swarmed?

3. What caused these huge swarms of locusts?

4. What is the most effective way of dealing with the locusts?

CHALLENGE: Did you know the U.S. experienced locust swarms? From Wikipedia: The last major swarms of Rocky Mountain locust were between 1873 and 1877, when the locust caused $200 million in crop damage in Colorado, Kansas, Minnesota, Missouri, Nebraska and other states. (The Rocky Mountain locust became extinct in 1902.) Do an internet search on whether there have been any other locust or grasshopper swarms affecting crops in the U.S.

How it started and why it got so bad

Desert locusts, or Schistocerca gregaria, are known for their rapid reproduction and ability to migrate long distances with the wind. In “quiet periods” they typically stay within deserts in Africa, the Near East and Asia, according to the Food and Agriculture Organization. But in the most extreme infestations – what the FAO classifies as full-blown plagues – they have been known to extend to some 60 countries.

“It’s a pest that has been around for eons and eons of time,” Keith Cressman, the U.N. Food and Agriculture Organization’s senior locust forecasting officer says. “It has so many different survival mechanisms … to just survive in some of the harshest areas and most remote parts of this planet. But it has this fabulous capacity to take advantage of good conditions.”

In mid-2018, a group of these pests found themselves in excellent conditions when a cyclone from the Indian Ocean hit an extremely remote area of the Arabian Peninsula known as the “Empty Quarter.”

“That was just a huge sandy area that got wet by these extraordinary rains. And this is exactly what desert locusts need in order to lay their eggs and to breed,” Cressman says.

The animals reproduce rapidly – every three months. And they reproduce exponentially, he says, so in favorable conditions like these, the population could multiply by 400 times every six months.

Typically, the Empty Quarter would dry out and the population would largely die off. But in late 2018, another cyclone hit in nearly the same spot and the population exploded yet again. Over the next three months, Cressman says, the insects started to migrate – some farther up on the Arabian Peninsula, and some into nearby Yemen. From there, they eventually traveled across the gulf and into Ethiopia and Somalia.

In early December 2019, yet another cyclone hit, this time in Ethiopia and Somalia, further fueling the locust populations. … Just before the end of the year, the swarms arrived in Kenya.

Swarms have also been spotted in Uganda, Tanzania and South Sudan, as well as in Persian Gulf countries such as Kuwait, Bahrain, Qatar and Iran. … (from the NPR article above) 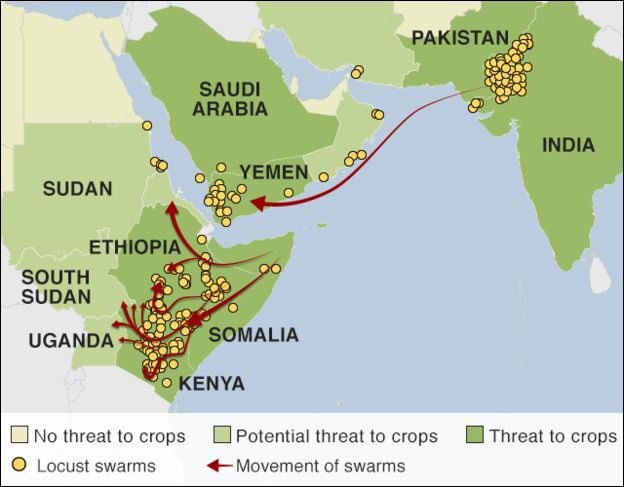 Watch a report from China’s CGTN: