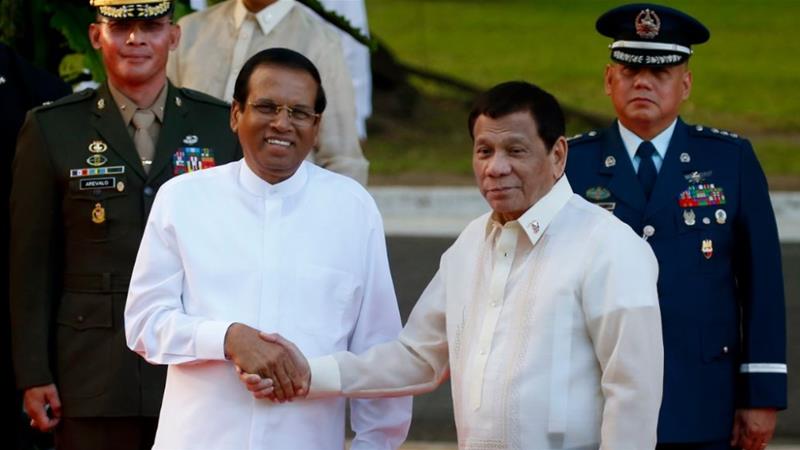 In a visit to the Philippines last month, Maithripala Sirisena (L) said he wanted to replicate Rodrigo Duterte's approach to tackling illegal drug use (AP)

Sirisena told Sri Lanka Parliament Wednesday convicted drug dealers will be executed in the next two or three months as part of a national narcotics crackdown.

He added that prisoners in the country’s Welikada Prison will be transferred to the high security Angunakolapelessa Prison, since Welikada had become a base for distributing drugs.

Sirisena has praised Duterte’s campaign and had hinted for months at a possible return to capital punishment.

“We need stringent laws to make a law-abiding and spiritual society,” he told lawmakers. “The country is now proliferated with various drugs including marijuana, cocaine, heroin and ice. Come what may, I will put into practice the decision I took to implement the death penalty within next two to three months.”

“I request human rights organizations not to object to the move to implement the death penalty as it is done to control the drug menace and underworld activities in Sri Lanka,” he added.

The last person to be executed in Sri Lanka’s occurred in 1976. After that time, the country continued to impose death sentences but didn’t carry them out.

Nearly 1,300 prisoners, including 84 women, are on death row in Sri Lanka.

Published at UPI .com on February 7. Reprinted here for educational purposes only. May not be reproduced on other websites without permission from United Press International. 2. For SRI LANKA:
a) list the who, what, where and when of the news item
b) Define moratorium.
c) For how long has there been a moratorium on capital punishment?
d) For what reasons is the president implementing this new policy?
e) President Sirisena said, ”I request human rights organizations not to object to the move to implement the death penalty as it is done to control the drug menace and underworld activities in Sri Lanka.”
What do you think of this policy of implementing executions of convicted drug dealers?

The death penalty has a long history in Sri Lanka. The British restricted the death penalty after they took control of the island in 1815 to the crimes of murder and “waging war against the King.”

After independence, then Prime Minister S. W. R. D. Bandaranaike abolished capital punishment in 1956. However, it was quickly reintroduced after his assassination in 1959. Opposition to the death penalty started to become increasingly widespread and the United National Party government modified the use of it in its 1978 rewrite of the constitution. Under the new arrangement, death sentences could only be carried out if authorized by the trial judge, the Attorney General and the Minister of Justice. If there was no agreement, the sentence was to be commuted to life imprisonment. The sentence was also to be ratified by the President. This clause effectively ended executions. The last execution in Sri Lanka took place in 1976. …

With the end of the Sri Lankan Civil War the country saw a sharp rise in child abuse, rape, murder and drug trafficking, prompting some lawyers and politicians to call for the reinstatement of the death penalty. Newly elected President Maithripala Sirisena, in 2015, said he supports a dialogue on the introduction of the death penalty should it be approved by Parliament. The statement coming after a series of high profile incidents of rape, killing and sexual abuse. …

In 2018, it was reported that Sri Lanka is going to reinstate capital punishment for drug dealers. President Maithripala Sirisena told the government, which earlier had unanimously backed the reinstatement of capital punishment, that he “was ready to sign the death warrants.” (from wikipedia)

In Jan. 2018, President Sirisena overruled a move to grant women in Sri Lanka the same rights as men to buy alcohol legally.