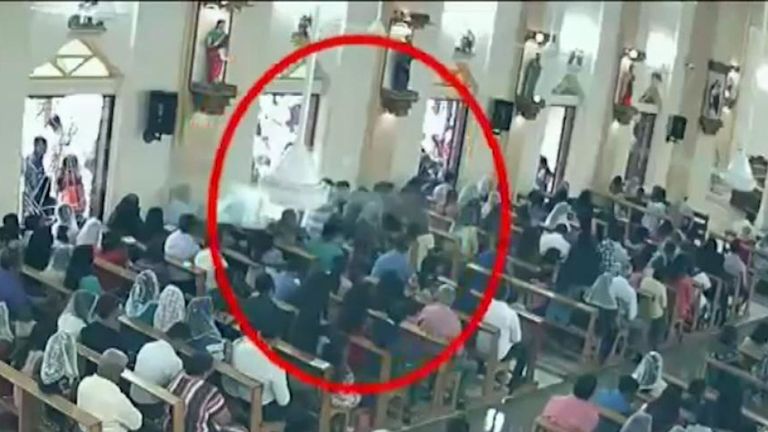 (BBC News) – On Easter Sunday, Sri Lanka was rocked by a series of bombings that killed more than 300 people at churches and top-end hotels.

It is the deadliest violence in the country since the end of the civil war a decade ago. Most of the victims are believed to be Sri Lankans, but at least 31 foreigners are also among the dead, with 14 still unaccounted for.

Here is what we know so far:

How did the attacks unfold?

The first reports were at about 8:45 a.m. local time on Easter Sunday (April 21). Six blasts took place within a short space of time.

Three were at churches – in the Kochchikade district of the capital, Colombo; in Negombo, to the north; and in the eastern city of Batticaloa. The other three blasts rocked the Shangri-La, Kingsbury and Cinnamon Grand hotels in Colombo. Sri Lanka’s St. Sebastians church, where a bomb was set off, 19 miles from the country’s capital, Colombo, on April 21, 2019. (Photo by Stringer/Getty Images)

Two further explosions were reported later as police searched for suspects – one in Dehiwala in southern Colombo, and another one near the Colombo district of Dematagoda, during a police raid.

The police have not given details about how many people died at each of the blast sites.

Late on Sunday, an improvised explosive device was found and disposed of close to the country’s main airport, near Colombo.

And on Monday another blast rocked a street near a church in the capital. Police were attempting to defuse explosives in a vehicle used by the attackers when it blew up.

Three police officers were killed during a search at a suspected safe house on the outskirts of Colombo when its occupants apparently detonated explosives to prevent arrest, authorities said.

According to police sources, an attack on a fourth hotel failed and helped lead police to the Islamist group now blamed for the assault.

How many people are dead?

On Tuesday, the official death toll given by authorities rose to 310 with more than 500 injured.

Hundreds of Sri Lankan families are in mourning. One of the first victims was celebrity chef Shantha Mayadunne. Other Sri Lankans killed included Christians attending Easter services and staff at the hotels targeted.

“You can see pieces of flesh thrown all over the walls and on the sanctuary and even outside of the church,” Father Edmond Tillekeratne of the Archdiocese of Colombo told CNN from St. Sebastian’s Church in Negombo, one of the locations targeted.

He said that the blast took place after Easter Mass, where he estimated more than 1,000 people had come “because it is a special day.”

Other churches attacked were St. Anthony’s Shrine in Kochchikade and Zion Church in Batticaloa.

“It was a river of blood,” said N. A. Sumanapala, a shopkeeper near St. Anthony’s Shrine where he had run inside to help told The New York Times. “The priest came out and he was covered in blood.”

The confirmed international casualties are from the UK, Denmark, Portugal, India, Turkey, Australia, the Netherlands, Japan, the US and China. Among the dead are three of Danish billionaire Anders Holch Povlsen’s four children.

Who was behind the attacks?

On Monday Sri Lankan authorities said they believed a little-known local militant Islamist group known as National Thowheed Jamath (NTJ) was to blame. They said officials were investigating whether it had had “international help.”

On Tuesday, Islamic State said it had carried out the attacks. The group released a photo and video of the men it claims were responsible via its self-styled news outlet Amaq. In the photo, all but one of the men can be seen with their faces covered. Some are holding knives.  The video showed the eight men pledging allegiance to Islamic State.

In a statement, Amaq said “members of the US-led coalition and Christians in Sri Lanka” had been targeted.

BBC security correspondent Gordon Corera says that while IS in the past has claimed attacks it was not involved in, their statement is being taken seriously due to the number of deaths. The choice of targets is more in line with Islamic State ideology than with traditional types of communal violence seen in Sri Lanka, he added.

Addressing reports that officials had had prior intelligence of forthcoming attacks, Prime Minister Ranil Wickremesinghe said: “We must look into why adequate precautions were not taken. Neither I nor the ministers were kept informed.”

Police have arrested 40 people and said all the attacks were carried out by suicide bombers. Those arrested have not been publicly identified.

In an attempt to curb misinformation, the government imposed a curfew and also blocked major social media and messaging services, including Facebook and WhatsApp, according to the president’s secretary, Udaya Seneviratne.

Published at BBCNews .com on April 22 and 23 (with some reporting from UPI). Reprinted here for educational purposes only. May not be reproduced on other websites without permission from BBC News.

2. For SRI LANKA:
a) list the who, what, where and when of the news item
b) How many people were killed / wounded in the terrorist attacks on Christian churches and luxury hotels in Sri Lanka on Easter?
c) Who is believed to be responsible for the suicide bombings?
d) How have officials responded to the attacks? (What actions have they taken?)
e) Why do you think the terrorists attacked on Easter Sunday?

The Sri Lankan government has said locals from two known groups carried out the attack. But from the start – because of the scale and sophistication of it – they have also said they thought there was an external role.

In the past, IS has sometimes claimed attacks that it was not involved in or which it simply inspired. But the details from so-called Islamic State would seem to back up the government’s assessment.

The choice of targets is much more in line with IS ideology than with the traditional types of communal violence seen in Sri Lanka.

There are still questions – did the local men affiliate themselves to IS or receive direct support? Did they travel to Syria or to other countries? The Sri Lankan government has said it believes some of them had spent time abroad, but how significant was that to the plot?

Answering questions like these will be important not just for Sri Lanka but other countries as they try and understand whether other relatively small, locally focused groups could be capable of transforming a threat into violence on such a massive scale. (BBC News)