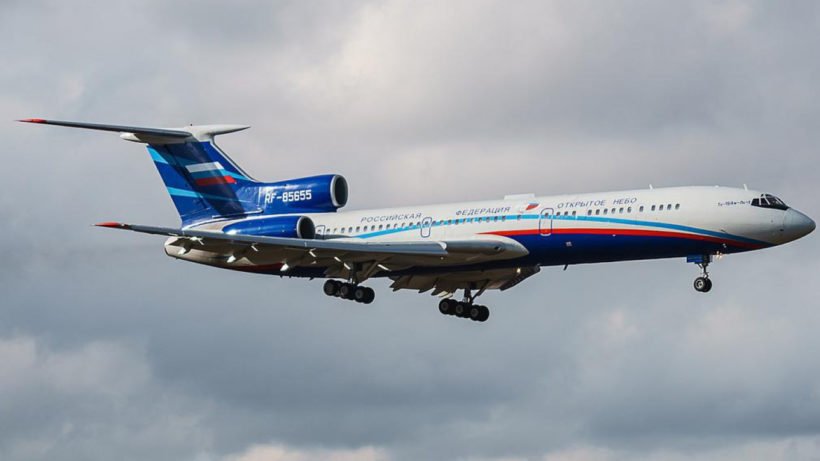 (Compiled from UPI and NY Post) –The Russian government announced Friday that it will withdraw from the Open Skies Treaty — a 30-year-old pact among 34 nations that permits unarmed surveillance flights — after the United States dropped out last fall.

The treaty allowed Russia and Western nations to conduct unarmed reconnaissance flights over each other’s territories, [with the intended goal of] building trust between both sides.

The United States officially departed the treaty in November after…the Trump administration [noted] that Russia was repeatedly in violation of the agreement.

The Pentagon [highlighted the fact] that Moscow wasn’t permitting flights over the Kaliningrad region, where U.S. officials suspect the Russian military has tested nuclear weapons.

Russia’s foreign ministry said in a statement on Friday:

“Given the lack of progress in efforts to remove obstacles preventing the future functioning of the treaty in a new situation, [we are] entitled to announce the start of domestic procedures to pave the way for Russia’s withdrawal from the Treaty on Open Skies. Once the procedures are completed, notifications will be sent to the treaty depositories.”

Improvements in surveillance technology and satellite networks over the last three decades have lessened the need for most reconnaissance flights.

Upon first announcing U.S. withdrawal from the treaty, U.S. officials, speaking to a small group of reporters on May 21 (on condition of anonymity), said the White House had informed Russia  of its intention to pull out of the treaty, arguing that the Kremlin had repeatedly violated the decades-old pact.

The decision came after a six-month review that found multiple instances of Russia refusing to comply with the agreement.

“During the course of this review it has become abundantly clear that it is no longer in America’s interests to remain a party to the Open Skies Treaty,” one official said, [noting] that Russia violates and implements the treaty in ways that can increase military threats against the US and its allies.

More than one of the officials added that Russia had forbidden flights over Moscow and Chechnya, as well as near Abkhazia and South Ossetia. Russia also placed restrictions on conducting observations in Kaliningrad, [its exclave in Eastern Europe that sits between NATO allies Lithuania and Poland, and is] home to Russia’s Baltic fleet, where major military exercises are conducted.

Trump administration officials also [noted] that the imagery collected during these treaty-approved flights could be obtained quickly and at less cost from other US or commercial satellites.

Classified documents reviewed by the New York Times show that the Pentagon and US intelligence agencies accused the Russians of using flights over the US to map out critical infrastructure that could be hit by cyberattacks.

The treaty was initially proposed by President Dwight Eisenhower in 1955 [as a means to deescalate tensions during the Cold War], but was not revived until 1989, when President George H.W. Bush [who was previously Director of the CIA] negotiated the deal after the collapse of the Soviet Union.

The deal was [eventually signed in 1992 between NATO members and former Warsaw Pact countries following the demise of the Soviet Union] and went into force in January 2002.

The Trump administration in August 2019 withdrew from another treaty — the Intermediate-range Nuclear Forces treaty signed by President Ronald Reagan and Soviet leader Mikhail Gorbachev in 1987.  That treaty banned both sides from stationing short- and intermediate-range, land-based missiles in Europe.

Washington said that for years Moscow has been developing and deploying nuclear weapons that violate the treaty and threaten the US and its allies, particularly in Europe.

2. What is the purpose of the Open Skies Treaty?

4. For what reasons did the Trump administration withdraw from the treaty?

5. a) Many in Washington had for over a decade accused Russia of non-compliance with treaty protocols, asserting Moscow was obstructing surveillance flights on its territory, while misusing its own missions for gathering key tactical data. Despite this, neither the Bush or Obama administrations moved to withdraw the U.S. from the treaty. Do you think the Trump administration’s decision is the right thing to do for the U.S.? Explain your answer.
b) Ask a parent the same question.

The Treaty on Open Skies

On May 21, 2020, U.S. Secretary of State Mike Pompeo released the following statement:

A cornerstone of President Trump’s National Security Strategy is to protect the American people, the American way of life, and American security interests. As the President has made clear, the United States must take a clear-eyed look at any agreement through the prism of today’s reality and assess whether such agreement remains in the U.S. interest. After careful consideration, including input from Allies and key partners, it has become abundantly clear that it is no longer in America’s interest to remain a party to the Treaty on Open Skies.

At its core, the Treaty was designed to provide all signatories an increased level of transparency and mutual understanding and cooperation, regardless of their size. Russia’s implementation and violation of Open Skies, however, has undermined this central confidence-building function of the Treaty – and has, in fact, fueled distrust and threats to our national security – making continued U.S. participation untenable.

While the United States along with our Allies and partners that are States Parties to the Treaty have lived up to our commitments and obligations under the Treaty, Russia has flagrantly and continuously violated the Treaty in various ways for years. This is not a story exclusive to just the Treaty on Open Skies, unfortunately, for Russia has been a serial violator of many of its arms control obligations and commitments.  Despite the Open Skies Treaty’s aspiration to build confidence and trust by demonstrating through unrestricted overflights that no party has anything to hide, Russia has consistently acted as if it were free to turn its obligations off and on at will, unlawfully denying or restricting Open Skies observation flights whenever it desires.

Russia has refused access to observation flights within a 10-kilometer corridor along its border with the Russian-occupied Georgian regions of Abkhazia and South Ossetia, thereby attempting to advance false Russian claims that these occupied territories are independent states.  Russia’s designation of an Open Skies refueling airfield in Crimea, Ukraine, is similarly an attempt to advance its claim of purported annexation of the peninsula, which the United States does not and will never accept. Russia has also illegally placed a restriction on flight distance over Kaliningrad, despite the fact that this enclave has become the location of a significant military build-up that Russian officials have suggested includes short-range nuclear-tipped missiles targeting NATO.  In 2019, Russia unjustifiably denied a shared United States and Canada observation flight over a large Russian military exercise.

These problems, moreover, follow on years of different Russian violations of the Treaty at various points since the Treaty entered into force, such as Russia’s violation, up until 2017, of improperly declaring force majeure to impose airspace restrictions related to VIP ground movements.  These periodic and shifting violations highlight Russia’s willingness for many years now, to restrict or deny overflights whenever it desires.  This strikes at the heart of the Treaty’s confidence-building purpose.

The problems raised by Russia’s selective implementation of Open Skies, moreover, go beyond just violating the Treaty’s provisions themselves.  Its approach to Treaty implementation has fatally undermined the very intent of the Treaty as a confidence- and trust-building measure, for far from allowing Open Skies to contribute – as it was intended to do – to building regional trust and goodwill, Moscow has increasingly used Open Skies as a tool to facilitate military coercion.  Moscow appears to use Open Skies imagery in support of an aggressive new Russian doctrine of targeting critical infrastructure in the United States and Europe with precision-guided conventional munitions.  Rather than using the Open Skies Treaty as a mechanism for improving trust and confidence through military transparency, Russia has, therefore, weaponized the Treaty by making it into a tool of intimidation and threat.

To those who suggest the United States respond with reciprocal steps of our own analogous to Russia’s own provocative actions and violations, we say: doing that would only further undermine the core purpose of the Treaty, and create further tension and distrust between the United States and Russia. We will not contribute to further weaponizing and poisoning with distrust a Treaty that was intended to build confidence.  The Open Skies Treaty was meant to contribute to international security, but it has been twisted and perverted in its implementation and now serves Russian purposes inimical to that security.

We understand that many of our Allies and partners in Europe still find value in the Treaty, and we are grateful for the thoughtful feedback they have offered us during the course of our review of these questions.  If not for the value they place on the OST, we would likely have exited long ago.  We are not willing, however, to perpetuate the Treaty’s current problems of Russian-engendered threat and distrust simply in order to maintain an empty façade of cooperation with Moscow.

Make no mistake: Russia alone bears responsibility for these developments, and for the continued erosion of the arms control architecture.  We remain committed to effective arms control that advances U.S., Ally, and partner security, that is verifiable and enforceable, and that includes partners that comply responsibly with their obligations.  But we cannot remain in arms control agreements that are violated by the other side, and that are actively being used not to support but rather to undermine international peace and security.  As noted, we may be willing to reconsider this decision if Russia demonstrates a return to full compliance with this confidence-building Treaty, but without such a change of course from the Kremlin, our path will lead to withdrawal in six months’ time. (from state.gov/on-the-treaty-on-open-skies)