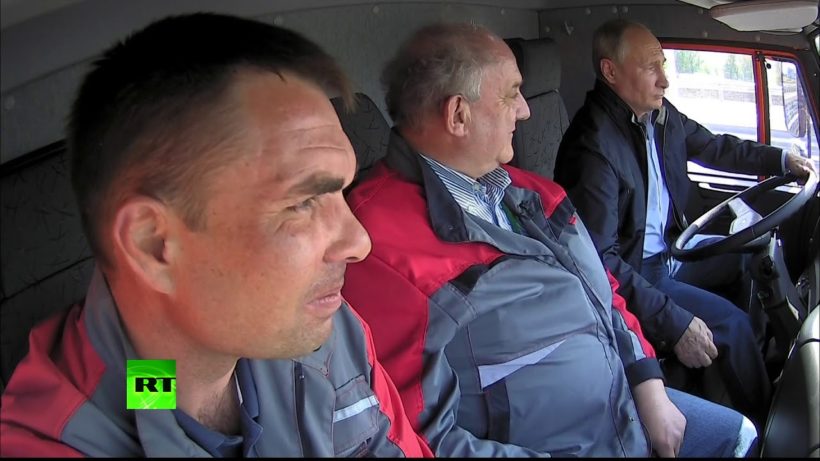 NOTE: Russian forces took control of Ukraine’s Crimea in late February 2014 following the toppling of (Russian-backed) Ukrainian President Viktor Yanukovich after deadly clashes between riot police and protesters trying to overturn his decision to spurn a trade and cooperation deal with the EU in favor of cultivating closer ties with Russia.

(by Agence France-Presse, UPI and VOA) – The North Atlantic Treaty Organization (NATO) on Wednesday denounced a new bridge linking mainland Russia to Moscow-annexed Crimea as “another violation” of Ukraine’s sovereignty and territorial integrity.

The Atlantic alliance echoed the European Union’s earlier condemnation of the bridge, which Russian President Vladimir Putin drove a truck over on Tuesday.

“Crimea is part of Ukraine and this bridge represents another violation of Ukraine’s sovereignty and territorial integrity,” Cazalet said in a statement.

The Kerch Strait Bridge, which limits sea traffic to Ukrainian ports on the Azov Sea, amounts to “the infringement of its navigational rights in its territorial waters,” he added.

“Russia continues to demonstrate a clear disregard for international law,” Cazalet said, adding that NATO will not recognize Russia’s 2014 annexation of Crimea.

Putin ordered the 12 mile long bridge four years ago and construction began in February 2016. He said Tuesday about 15,000 people and more than 200 businesses worked on the project. The bridge can handle 40,000 cars a day and move 14 million passengers and 13 million tons of cargo per year. Trains will begin crossing next year.

The bridge was ordered one month after Moscow annexed Crimea in March 2014, in a move that was internationally criticized. The annexation followed the ouster of Ukrainian President Viktor Yanukovych, a Russian ally, following large peaceful protests that were met with violence from Yanukovych that then forced him to flee.

The United States and most Western states have not recognized Crimea as Russian territory – condemning it as an illegal land grab – and have imposed sanctions over the move.

Moscow has called the annexation a “restoration of historical justice.”

Two years ago, the U.S. Treasury sanctioned (imposed sanctions on) several companies and numerous individuals involved in the construction of the bridge. U.S. officials said these Crimea-related sanctions will remain in place until Russia returns control of the peninsula to Ukraine.

U.S. Secretary of State Mike Pompeo condemned Russia’s construction of the bridge, which connects mainland Russia to Moscow-annexed Crimea, saying, “The bridge represents not only an attempt by Russia to solidify its unlawful seizure and its occupation of Crimea, but also impedes navigation by limiting the size of ships that can transit the Kerch Strait, the only path to reach Ukraine’s territorial waters in the Sea of Azov. We call on Russia not to impede this shipping,” he added.

Ukrainian Prime Minister Volodymyr Groysman condemned the project, saying that larger ships will not be able to pass through its ports on the Azov Sea. “The Russian occupying powers, which have temporarily occupied Crimea, are continuing to act outside international law,” Volodymyr said.

The 29-member NATO is currently pursuing a dual-track policy towards the Kremlin of defense and deterrence coupled with an offer of dialogue.

Tensions between NATO and Russia are at levels not seen since the Cold War, including over Moscow’s support for pro-Russian separatists in the conflict in eastern Ukraine.

Compiled from reports published at Agence France-Presse (AFP) on May 16, 2018 and UPI and VOA on May 15.

2. For RUSSIA:
a) list the who, what, where and when of the news item
b) Define annex.
c) The U.S. is a member of NATO, a 29 country alliance. Why is NATO opposed to Russia’s construction of a bridge from Russia to Ukraine’s Crimea region?
d) How did the U.S. and Europe react to Russia’s 2014 annexation of Crimea from Ukraine?
e) What approach is NATO taking toward Russian aggression in the region?

Putin’s bridge to Crimea: (from a rferl .org report):

The $3.7 billion project includes a four-lane highway and a two-lane railroad, which is still under construction.

“The construction of the bridge aims at the further forced integration of the illegally annexed peninsula with Russia and its isolation from Ukraine, of which it remains a part,” spokeswoman Maja Kocijancic said in a statement.

The U.S. State Department also condemned Russia’s construction of the bridge, saying it was done “without the permission of the government of Ukraine.”

“Russia’s construction of the bridge serves as a reminder of Russia’s ongoing willingness to flout international law,” spokeswoman Heather Nauert said in a statement.

Crimea is connected to the mainland in Ukraine only, so the newly built bridge is the sole link between the peninsula and Russia.

In the EU statement, Kocijancic said that the bridge “limits the passage of vessels via the Kerch Strait to Ukrainian ports in the Azov Sea. The European Union continues to condemn the illegal annexation of Crimea…by Russia and will not recognize this violation of international law,” she said.

Moscow’s takeover of the Black Sea peninsula severely damaged its relations with Kyiv and the West, leading to the imposition of sanctions by the United States, the European Union, and other countries.

Ties were further torn when Russia fomented unrest in Ukraine and backed separatists in a war that has killed more than 10,300 people in the eastern region known as the Donbas.

“New bridge cements Russia’s hold on Crimea” from Euro News – shows the 4 year construction of the bridge in 2 minutes: