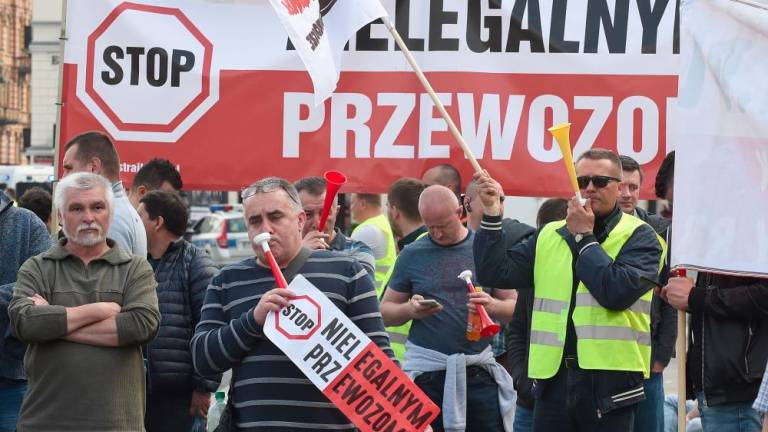 (by AFP at France24) – Hundreds of taxi drivers on Monday blocked downtown Warsaw in protest over a Polish draft law they see as favourable to ride-sharing app Uber as well as over US support for the American company.

Traditional cab operators argue that the Uber app and others like it represent unfair competition because their drivers can dodge the rules and restrictions that regulate regular taxis.

“My current income is a third lower than two years ago” because of competition from Uber, Warsaw taxi driver Marek said, preferring not to give his last name.

“What we’re asking for is fairness: that all (cab operators) be required to be licenced, have a meter [in the taxi/car], that they all pay taxes in the countries where they work and social security contributions too, that they pass exams like us,” he told AFP.

The draft legislation, which would regulate the activity of ride-sharing firms and has already been approved by the government, notably states that a mobile app can replace the taximeter.

The protesters blocked one of the Polish capital’s main streets, stopping before the prime minister’s office, then the US embassy and finally the ministry of entrepreneurship.

Their representatives notably denounced a letter sent to the Polish government by US ambassador to Warsaw Georgette Mosbacher.

According to portions of the letter leaked to the local media, Mosbacher allegedly threatened to freeze US investments in Poland if Uber were to encounter trouble in the EU member.

The cab drivers are notably calling on the Polish government to abandon the draft law and introduce a new law that would protect traditional taxi operators.

Some protesters tossed fake money in the air. The “uberdollar” banknotes were adorned with the likeness of Mosbacher.

The spokesman for the ministry of infrastructure, which prepared the transport draft law, called the cab driver protest unfounded, saying the legislation will ensure a level playing field for all cab operators.

From an Agence France-Presse report ublished at France24 .com on April 8. Reprinted here for educational purposes only. May not be reproduced on other websites without permission from the France24 and AFP. 2. For POLAND:
a) list the who, what, where and when of the news item
b) Why are the taxi drivers upset over Uber and other ride sharing apps?
c) What negative effect has competition from Uber had on the drivers?
d) What are taxi drivers asking the government to do? (list 4)
e) What do you think? Are each of the taxi drivers’ requests reasonable or unreasonable? Explain your answer.
f) From the article: US ambassador to Warsaw Georgette Mosbacher allegedly threatened to freeze US investments in Poland if Uber were to encounter trouble in the EU member. If true, and it is as it appears, do you agree or disagree with the Ambassador’s push for Uber?
g) The problem is that competitors like Uber are taking a lot of customers from taxis whose drivers must meet many government regulations to operate – Uber just needs a licensed driver and a smartphone. Uber, etc. most likely undercuts the competition in price. What do you think? Is there a future for taxis? Should taxi drivers give up their protests and go into a different line of work? Is there anything traditional taxi drivers could do to recapture their customers and retain their livelihoods?
In a separate circumstance: In NYC many drivers bought million dollar taxi medallions from the city in order to operate [See “Background” below] – does the city government have an obligation to buy them back or somehow help them now that the medallions are worth very little?

Taxi drivers in large cities in countries around the world have held protests opposing Uber. Read about NYC taxi drivers’ problems with Uber:

The medallion system regulates the yellow taxis serving New York City: since 1937, each vehicle has needed a medallion in order to legally operate. Few taxi drivers own theirs; most lease them, paying around $100 for one 12-hour shift.

The limited number of medallions issued by the city made each one highly valuable:

Following the rise of Uber, medallions are worth approximately $160,000 today.

For many taxi drivers, owning a medallion meant success. Homes would be purchased. Children would be sent to universities.

Driver MD Islam from Bangladesh managed to put a down payment on his medallion in 2010, and for a few years, it seemed like a good investment. Then, in 2015, with the widespread popularity of Uber, Lyft and other ride-hailing apps, his fortunes changed.

Ride-hail cars saturated the market and yellow taxi medallion values dropped precipitously. “I’ll have to spend my whole life paying this loan,” said Islam, now 40 and in debt to the tune of $830,000.

“There is no future for taxis,” said 48-year-old Sayed Moustafa, who has been driving a taxi for over a decade. “My son is 17, and he uses Uber. My daughter is 15, and soon, she’s going to use Uber, like him. All these young people, when they grow older, they’re still going to use technology. They’ll be used to it. They won’t take taxis.” (from a 2017 UK Guardian article by Cecilia Saixue Watt)