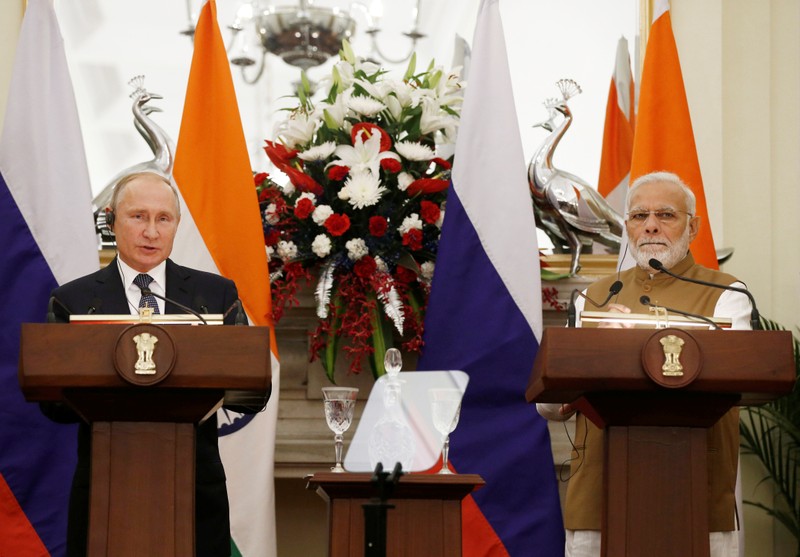 (by Vladimir Soldatkin and Sanjeev Miglani, Reuters) NEW DELHI – India agreed to a deal with Russia to buy S-400 surface to air missile systems on Friday (Oct. 5), the two sides said, as New Delhi disregarded U.S. warnings that such a purchase could trigger sanctions under U.S. law.

Although there was no public signing, the deal was sealed during President Vladimir Putin’s ongoing visit to New Delhi for an annual summit with Indian Prime Minister Narendra Modi.

“The deal was signed on the fringes of the summit,” Kremlin spokesman Dmitry Peskov told Reuters. The contract is estimated to be worth more than $5 billion and gives the Indian military the ability to shoot down aircraft and missiles at unprecedented ranges.

A State Department spokesperson said this week that the implementation of the sanctions act would be focused at countries acquiring weapons such as the S-400 missile batteries.

Last month, the United States imposed sanctions on China’s military for its purchase of combat fighters as well as the S-400 missile system it bought from Russia this year. [Officials said the move was intended to send a message to other countries considering similar Russian arms deals.].

India is hoping that President Donald Trump’s administration will give it a waiver on the weapons systems which New Delhi sees as a deterrent against China’s bigger and superior military.

“The (two) sides welcomed the conclusion of the contract for the supply of S-400 long range surface to air missile system to India,” India and Russia said in a joint statement at the end of the talks.

The two countries also signed eight agreements covering space, nuclear energy and railways at a televised news conference. “We always arrive to India with great pleasure as we know that we are surrounded here in the environment of very frank friendship, business cooperation,” Putin said.

Russia will also help India in its plans to mount a manned space mission by 2022.

“India gives the highest priority to ties with Russia, in fact in a changing world, our ties have become more important,” Modi said.

For all the warm words, ties with Moscow are a lot less central to Delhi than they were during the Cold War years, as India has diversified arms purchases, closing $15 billion of deals with the United States over the last decade.

Published at Reuters Oct. 5, 2018. Reprinted here for educational purposes only. US Secretary of Defense Jim Mattis (L), US Secretary of State Mike Pompeo (2-L), Indian Foreign Minister Sushma Swaraj (2nd from R) and Indian Defense Minister Nirmala Sitharaman (R) pose for a photo after their meeting in Delhi on Sept. 6, 2018.

2. For INDIA:
a) list the who, what, where and when of the news item
b) What will the Russian S-400s enable the Indian military to do?
c) What penalty does India face under U.S. law for making a weapons deal with Russia? What is the name of the law?
d) On what country’s military did the U.S. impose sanctions after they recently bought weapons from Russia?
e) India’s government is hoping that the Trump administration will give them a waiver on the weapons systems they purchases from Russia, as New Delhi the purchase as a deterrent against China’s bigger and superior military. Following the announcement, Prime Minister Modi said, “India gives the highest priority to ties with Russia, in fact in a changing world, our ties have become more important.”
Ask a parent: Considering U.S. relations with China and Russia, do you think the U.S. should waive sanctions on India? Please explain your answer. (If your parent hasn’t read this news story, please relate it to them before asking their opinion.)

Read about CAATSA (Countering America’s Adversaries Through Sanctions Act) at the U.S. Treasury website. Note: President Trump signed the bill passed by the Senate 98-2, but said the legislation was “seriously flawed.”