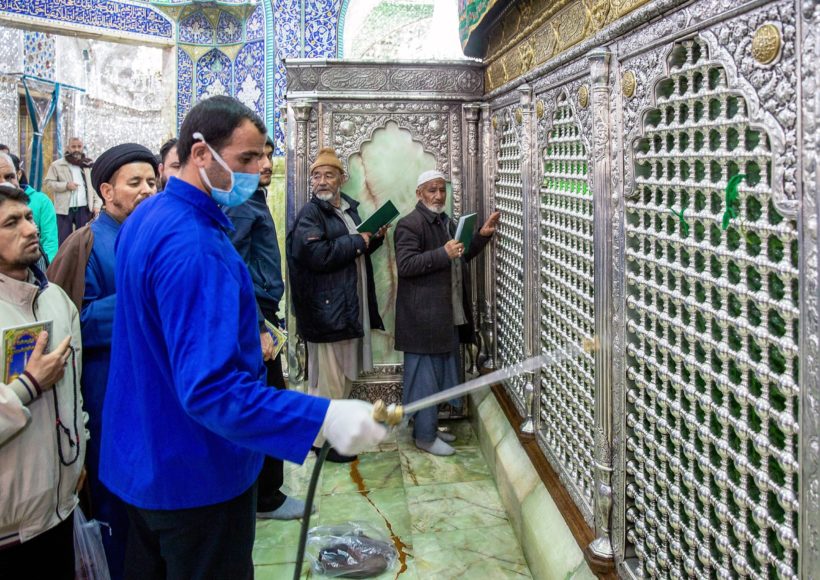 A man disinfects the shrine of Fatima Masumeh, in Qom, Iran, against coronavirus, as muslim pilgrims continue to travel to the shrine, ignoring the threat of contracting the virus there. Photograph by Ahmad Zohrabi.

(by Robin Wright, The New Yorker) — Iran’s deputy health minister, Iraj Harirchi, was pale and drenched in sweat during a press conference on Monday as he told reporters that the Islamic Republic had “almost stabilized” the country’s outbreak of coronavirus. He mopped his brow so often that an aide scurried to the lectern with a box of tissues. Harirchi dismissed as hype an Iranian lawmaker’s claim that fifty people had already died from covid-19.

“I will resign if the numbers are even half or a quarter of this,” he said, adding that Iran had only sixty-one confirmed cases, with twelve deaths.

Iran opposed quarantines, he said, because they belonged to an era before the First World War—“to the plague, cholera, stuff like that.” The next day, Harirchi confirmed in a video—from quarantine—that he had contracted coronavirus.

Iran, a country of eighty-three million people, has now become one of the global epicenter of the coronavirus—with the highest mortality rate in the world. Based on official numbers, the mortality rate in Iran has fluctuated daily, between eight and eighteen per cent, compared to three per cent in China and less everywhere else.

Iran is also unique, because a disproportionate number of confirmed cases are senior government officials:

Iran’s official counts—388 confirmed cases and 34 deaths, as of Friday, Feb. 28—may be grossly underreported. In an early analysis published on Feb. 24, six Canadian epidemiologists calculated that Iran probably had more than 18,000 cases of coronavirus. Their mathematical model was based on Iran’s official death toll, the disease’s infection and mortality rates worldwide, inflections in other countries traced to Iran, flight data, and travel patterns.

“Given the low volumes of air travel to countries with identified cases of COVID-19 with origin in Iran (such as Canada), it is likely that Iran is currently experiencing a COVID-19 epidemic of significant size,” they concluded.

Because of the wide margin of error, the number of cases could range from as low as 3,700 to as high as 53,000. In the end, the Canadian epidemiologists settled on 18,300, with a ninety-five-per-cent confidence rate. All of their estimates are many, many times higher than the figures that Iran has reported. …

Kamiar Alaei, a widely recognized Iranian global health-policy expert who co-founded an innovative HIV clinic in Tehran (but now lives in the U.S.), also emphasized the tricky and still evolving mathematics of coronavirus contagion. “The mortality rate elsewhere is around one to two per cent, and three per cent in China,” Alaei, who is now a co-president of the Institute for International Health and Education, in Albany, told me. “Iran has announced thirty-four deaths, although some unofficial reports claim it is at least a hundred and thirty-four and even two hundred. So if the death rate is only one per cent, then the total number of cases would be between thirty-four hundred and ten thousand or even twenty thousand.”

The outbreak in Iran appears to have started in Qom, the city of Shiite Muslim seminaries run by leading ayatollahs, about two hours from Tehran. It is also home to the Fatima Masumeh shrine – famed for its giant gold dome and intricate blue tilework – which draws Muslim pilgrims from all over the world. …

The first mention of the disease by the government was a report of two deaths in the city on February 19th. Initial reports indicate that the carrier of the virus may have been a merchant who travelled between Qom and Wuhan, in China, where covid-19 is believed to have originated. The outbreak is estimated to have begun between three and six weeks ago, which would mean that the two Iranians who died could have been sick and infecting others for weeks. 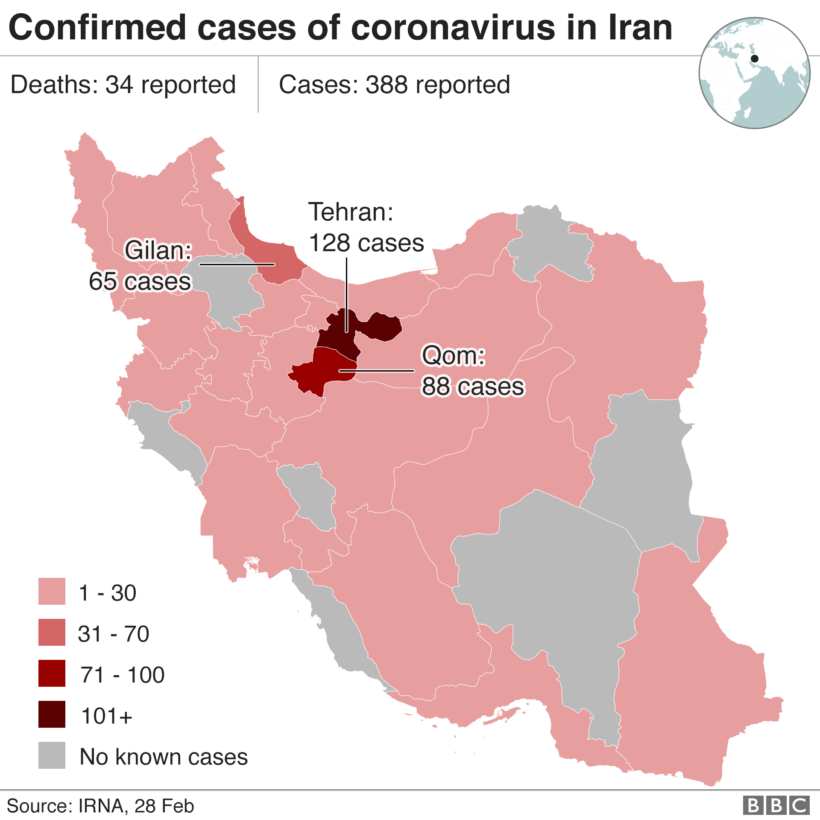 Within eight days of the first reported death in Iran, covid-19 had spread to twenty-four of the country’s thirty-one provinces. The number of cases has roughly doubled daily since Tuesday, Feb. 25.

Instead of closing down public sites, a measure that public-health experts have taken in other countries, the head of the shrine in Qom called on pilgrims to keep coming.

“We consider this holy shrine to be a place of healing. That means people should come here to heal from spiritual and physical diseases,” Mohammad Saeedi, who is also the representative of Iran’s Supreme Leader (Ayatollah Ali Khamenei) in Qom, said in a video.

Cases traced back to Iran have been reported in Azerbaijan, Afghanistan, Bahrain, Canada, Georgia, Iraq, Kuwait, Lebanon, Oman, Pakistan, and the United Arab Emirates. Many of these cases have been linked specifically to visits to Qom.

Politics may have played a role in the government’s handling of the health crisis, Alaei, the health-policy expert, told [reporter Robin Wright]. The outbreak coincided with two major milestones – the anniversary of Iran’s Islamic Revolution, on February 11th, and the parliamentary election, on February 21st. “The government didn’t want to acknowledge that they had a coronavirus outbreak because they feared it would impact participation in these two events,” he said. “So for weeks there was a huge silence.” Less than forty-three per cent of Iranian voters turned out for the election, the lowest rate of participation since the 1979 revolution. Both voters and poll workers were photographed wearing masks.

“It was the political decision that led to this outbreak in Iran,” Alaei said. … Alaei was imprisoned in 2008 for “communicating with the enemy,” running espionage rings, and trying to “launch a velvet revolution” against the government in Tehran. He spent thirty months in the notorious Evin Prison. He moved to the United States after his release.

The coronavirus is also becoming a new flashpoint between Iran and the United States. After the election, the Supreme Leader, Ayatollah Ali Khamenei, accused Iran’s enemies of exaggerating the threat of coronavirus to scare voters away from the polls.

“This negative propaganda about the virus began a couple of months ago and grew larger ahead of the election,” he said. “Their media did not miss the tiniest opportunity for dissuading Iranian voters and resorting to the excuse of disease and the virus.”

On Wednesday, the U.S. Secretary of State, Mike Pompeo, [said] that Iran was lying about “vital details” of the spread of the virus.

The timing of the epidemic is particularly dire for Iran’s economy. As part of President Trump’s “maximum-pressure campaign,” the U.S. reimposed economic sanctions on Iran—and any foreign company or country that does business with it—in November, 2018. Iran’s economy contracted more than nine per cent last year. Since the coronavirus outbreak began, ten days ago, eleven countries, including major trading partners such as Afghanistan, Iraq, and Turkey, have closed their borders to the Islamic Republic, according to Adnan Mazarei, an economist at the Peterson Institute for International Economics, in Washington. “The entire Middle East region could soon be affected by Iran’s role as an epicenter of this contagion,” he wrote on Thursday. “The Middle East region will certainly be hit by a new round of downward pressure on oil prices on account of a decline in demand for oil by China and elsewhere,” he added. And China has accounted for a quarter of all Iranian trade.

Internal commerce is also likely to take a hit on the eve of Nowruz, the Persian New Year, in three weeks. Nowruz is the country’s biggest holiday, and the ritual is to buy new clothes and toys—and to travel to the Caspian coast or other vacation spots to take a break from Iran’s mounting crises. The more that Nowruz celebrations are curtailed, the greater the danger for protests about the epidemic, global isolation, and unanticipated economic setbacks. Two waves of protests have challenged the regime since November.

“In schools, high schools, universities, and workplaces, everybody should pay attention to health recommendations. But we must all continue our work and activities, because it is one of the enemies’ plots to spread fear in our country and close down the country.”

The ailing deputy health minister was more candid. “I’m saying this deep from my heart . . . take care of yourselves,” Harirchi said in a video that he posted from quarantine. “This is a democratic virus, and it doesn’t distinguish between poor and rich, statesman and an ordinary citizen. It may infect a number of people.” In the Islamic Republic, that number may be frighteningly large.

Published by newyorker .com on February 28, 2020. Reprinted here for educational purposes only. May not be reproduced on other websites without permission from The New Yorker.

1. What is believed to be the origin of the coronavirus in Iran?

2. What is the epicenter of Iran’s coronavirus?

3. What is significant about the mortality rate for the coronavirus in Iran?

4. What is unique about a number of the confirmed cases?

5. What do experts say is probably true of the number of cases reported in Iran?

7. What accusation did President Rouhani make against Iran’s enemies?

8. What do you think of the authoritarian regime’s handling of the coronavirus in Iran – including greatly underreporting the true numbers of those infected – and encouraging Muslim pilgrims to continue traveling to the shrine in Qom (the epicenter)?

Interesting note: No news outlets have reported on how multiple Iranian government officials might have contracted the coronavirus.

Watch a February 25 video posted at YouTube by the World Health Organization (WHO):