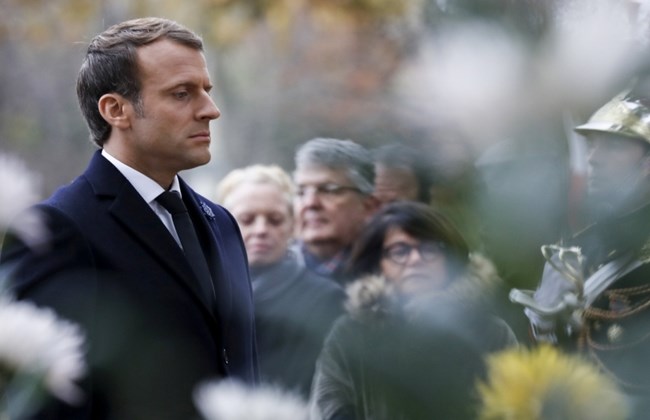 November 11, 2017: French President Emmanuel Macron stands at attention after laying a wreath in front of the statue of Georges Clemenceau during the Armistice Day commemorations marking the end of World War I in Paris, France. (Reuters/Francois Guillot)

(David Chazan, in Paris Christopher Hope, Chief Political Correspondent, in London Camilla Tominey, in London, UK Daily Telegraph) – French President Emmanuel Macron has provoked a row by ordering that ceremonies in France marking the centenary of the end of the First World War next month must avoid commemorating it as a military triumph.

Sixty heads of state and government including US President Donald Trump are to attend ceremonies in Paris on Armistice Day, November 11.

The French president will make a speech at the Tomb of the Unknown Soldier beneath the Arc de Triomphe.

But Mr. Macron’s office said an “overly military” ceremony would risk offending the French, who now view the First World War as a “mass slaughter” rather than a glorious victory.

An Elysée Palace source said: “The combatants were mainly civilians who had been armed.” About 40 million soldiers and civilians died in the four-year conflict.

…The French President was keen to avoid any homage to Marshal Pétain, a French hero of the First World War who is reviled for his later role as head of the Vichy government that collaborated with the Nazis during the Second World War.

However, he sparked a furious row on social media. Michel Goya, a historian and former infantry colonel, accused him of “insulting the soldiers of 1918.”

Bénédicte Chéron, a military historian and author, said the Elysée was making a faux pas.

However, General Bruno Dary, head of the committee in charge of the eternal flame at the Tomb of the Unknown Soldier, said that even without a large-scale military parade, “the military dispositions will be the same as in previous years.”

Mr. Macron was criticized in August for failing to interrupt his holiday to join Theresa May and the Duke of Cambridge (Prince William) at a ceremony in Amiens, his home town, on the centenary of a battle that marked the beginning of the end of the First World War.

The British Government  has been invited to attend and will send a “senior Government minister,” the Foreign Office said last night.

Last night spokesman said: “The UK Government has been invited to the Armistice centenary commemorations in France and a senior government minister will attend.

“The UK has worked closely with France and Belgium throughout the four-year Centenary commemorations and ministers have regularly attended commemorative events. We will confirm attendance and further details for these events in due course.”

Lord Dannatt, the Chief of the General Staff from 2006 to 2009 who has sat on the UK Government’s World War One advisory board since 2013, welcomed President Macron’s tone.

He told The Daily Telegraph:

“Triumphalism, victory, those sort of notions are inappropriate. … There is no need for jingoistic reaction at all and for Macron to be just coming to that conclusion now shows he is a pretty inexperienced politician.”

Published at the UK Daily Telegraph on October 22. Reprinted here for educational purposes only. May not be reproduced on other websites without permission from the Daily Telegraph.

2. For FRANCE:
a) list the who, what, where and when of the news item
b) Why did President Macron make this order?
c) How many world leaders will attend the ceremony commemorating the 100 year anniversary of the end of WWI?
d) Michel Goya, a historian and former infantry colonel, accused President Macron of “insulting the soldiers of 1918.” What do you think: does Macron’s order insult those who fought and died in WWI? Explain your answer.