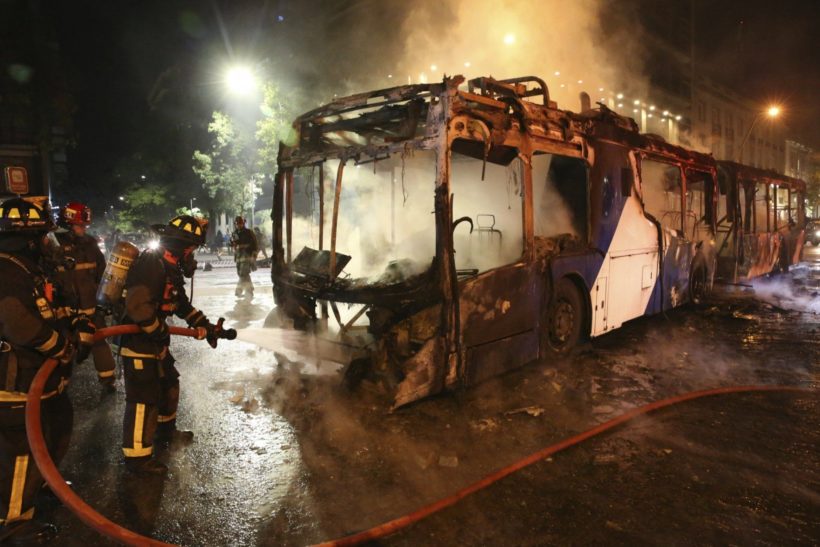 Firefighters put out the flames on a burning bus during a protest against the rising cost of subway and bus fares in Santiago, Chile on Friday, Oct. 18, 2019 (AP photo)

(by Maolis Castro and Juan Forero, The Wall Street Journal) SANTIAGO, Chile—Protests, looting and arson in what had until now been Latin America’s most prosperous and stable country led to eight deaths Sunday, with the violence spreading beyond the capital even after President Sebastián Piñera announced late Saturday that the increase in subway fares that sparked the unrest would be canceled.

Officials said five people died in a clothing factory outside of Santiago, the capital, after looters sacked and torched the building. Earlier in the day, three people were found dead in a supermarket in the San Bernardo district of Santiago after it was ransacked and set afire, authorities said.

“We are at war against a powerful, relentless enemy, who doesn’t respect anyone, who is willing to use violence without any limits, even if it means the loss of human life,” Mr. Piñera said in an address Sunday evening that was televised across Chile.

He differentiated between peaceful protest, which he said was welcome, and those who were sacking businesses and setting stores ablaze.

“We have seen the capacity of destruction of these vandals, these people who represent evil,” he said.

A state of emergency was declared on Saturday in the capital and five provinces along with curfews in Santiago and Concepción, some 300 miles to the south of the capital, as authorities tried to control the unrest that led to hundreds of arrests and to at least 72 police officers being injured, Interior Minister Andrés Chadwick said at a news conference.

Protesters have vandalized subway stations in Santiago’s large and modern metro system and set fire to buses, a subway train and part of the headquarters of Enel Chile, the local subsidiary of the Italian energy company. 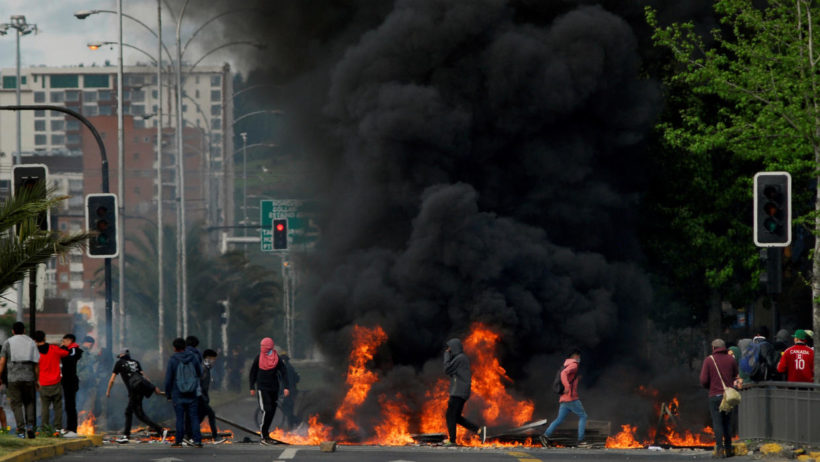 Over the weekend, the unrest that began to gather momentum last week spread from this capital of 6.7 million to the cities of Valparaíso on the Pacific coast and Concepción. Flights were delayed or canceled at Santiago’s international airport, and hundreds of passengers spent the night sleeping on the floor.

The government responded with tear gas and water cannons. Police, soldiers and armored vehicles were deployed across the capital, which for some Chileans brought back jarring memories of the Augusto Pinochet dictatorship of the 1970s, when the military used iron rule to control this country. …

The fare increase had initially led students to burst into subway stations and jump over turnstiles or slip through underneath without paying. Their slogan was: “Evade, don’t pay, another form of struggle.” Last week, the protest turned violent, shaking this usually peaceful country in a way that it hadn’t been in years. 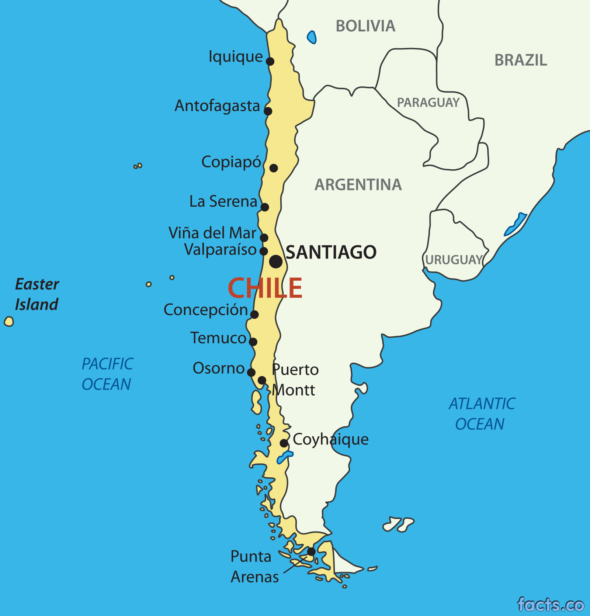 Mr. Piñera said on Saturday that the escalating violence had left him no choice but to use emergency powers to try to tamp it down. Still, he said that he would be open to a dialogue, though it was unclear with whom, since it didn’t appear there was a hierarchical structure to the protest movement.

“I have listened with humility,” Mr. Piñera said in announcing that the fare would be reduced.

Despite Mr. Piñera’s pledge, the decision to reduce the metro fare isn’t entirely up to him.

A panel of transportation experts calculates and sets metro price increases based on various parameters, from the cost of fuel to the consumer-price index and value of equipment. In an extraordinary session of the lower house of congress Sunday, lawmakers approved a law that gives the president the power to reduce the fare. The senate must now provide its approval.

Many of those protesting, though, pledged to continue in the streets, saying that their demonstrations are now about much more than the price of a subway ride.

Published by wsj .com on October 21, 2019. Reprinted here for educational purposes only. May not be reproduced on other websites without permission from The Wall Street Journal.

2. For CHILE:
a) list the who, what, where and when of the news item
b) Not all the protesters were violent. What did the violent protesters do?
c) For what reason did Chileans begin protesting last week?
d) What two actions did President Piñera take after the protests turned violent and also set fire to metro stations and an electric company?
e) Do you think the president was right to do both? Explain your answer.
f) In Chile, a person can serve as president for two 4-year terms, but not consecutively. Piñera, a conservative, was president from 2010-2014 and currently from 2018 to present; his predecessor, Michelle Bachelet, a socialist, served as president from 2006-2010 and from 2014-2018. Piñera won with 54% of the vote in 2018 against his opponent, a member of his predecessor’s [Bachelet’s] party.
All of the news reports point out that the protests continue despite the reversal on the subway fare increase, noting it is due to “public anger at rising living costs and income inequality.” Why do you think reporters were not able to find anyone who denounced the violent and destructive nature of many of the protesters?

While it was the fare increase that triggered the protests and looting, Chileans interviewed in the streets of the capital spoke about dissatisfaction with the high cost of living, pensions that pay poorly and a disconnect with Mr. Piñera’s center-right government.

“All you see here is not the [subway fare increse], but a series of injustices that have been taking place for years,” said Juan Pablo Sierra, a 36-year-old therapist who spoke on Liberator General Bernardo O’Higgins Ave., named after an icon of the country’s independence movement.

Some people were taking advantage of the chaos for their own benefit; televised images showed looters running from stores with big-screen televisions.

Constanza Uribe, 18, a university student who was with a group of protesters on Sunday, spoke about income inequality and what she asserted were limited opportunities for the poor. “The rise in the price of the metro was just the drop that led all this to spill over,” she said.

Asked about the violence and vandalism, she said it was meant to send a message. “I consider the destruction of the transport necessary because I don’t think we could have achieved things without destroying.”

Chileans confronted hours-long lines at grocery stores and gas stations in the capital Santiago after a weekend of chaos in which at least 11 people were killed amid violent clashes, arson attacks and looting through the country.

In addition to eight killed in fires over the weekend, Interior Minister Andres Chadwick said three more had died, including one man from gunshot injuries in the northern province of Coquimbo.

Chadwick said vandals who first attacked the metro and bus system had turned to looting and burning grocery stores to target the “country’s food supply chain.”

“That obviously reflects an intention … to cause harm to citizens in their daily lives,” Chadwick said.