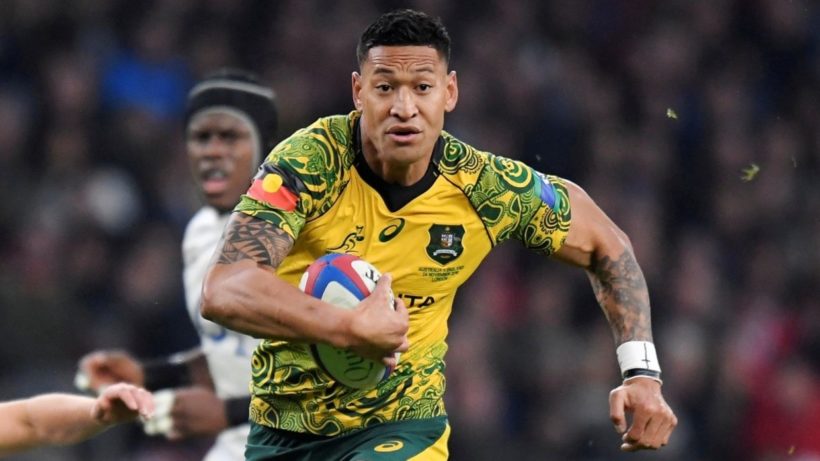 In a statement issued Monday, Rugby Australia said the player had “committed a high-level breach of the Professional Players’ Code of Conduct warranting termination of his employment contract.”

The 30-year-old has 48 hours to accept the sanction or face a code of conduct hearing.

Last week, the Wallabies and New South Wales Waratahs fullback posted an image on Instagram [that said “Warning”] listing “drunks, homosexuals, adulterers, liars, fornicators, thieves, atheists and idolaters,” reading underneath, “Hell awaits you. Repent! Only Jesus Saves” The post has not been removed.

Speaking to the Sydney Morning Herald after a church service on Sunday, Folau said [of his] post, which caused widespread condemnation.”I’ll stand on what the Bible says. I share it with love. I can see the other side of the coin where people’s reactions are the total opposite to how I’m sharing it.”

In April 2018, Folau — who has won 73 caps and had a contract with Rugby Australia until 2022 — was criticized for writing in an Instagram comment [to a question about what he thought] that gay people would go to hell unless they repented.

Folau, who broke the record for Super Rugby tries earlier this month, also tweeted a screenshot of the news that Tasmania last week became the first Australian jurisdiction to make gender “optional” on birth certificates.

“The devil has blinded so many people in this world, repent and turn away from your evil ways,” he captioned the screenshot. That tweet is also still active.

“Following the events of last year, Israel was warned formally and repeatedly about the expectations of him as player for the Wallabies and NSW Waratahs with regards to social media use and he has failed to meet those obligations.

“It was made clear to him that any social media posts or commentary that is in any way disrespectful to people because of their sexuality will result in disciplinary action.”

The statewide governing body for New South Wales has “stood (Folau) down … from all player duties with the NSW Waratahs until further notice,” NSW Rugby Union said Friday. …

Published at CNN .com on April 15. Reprinted here for educational purposes only. May not be reproduced on other websites without permission from CNN.

Folau spoke to the Sydney Morning Herald newspaper to give his take on the negative reaction his post has generated.

“I share it with love. I can see the other side of the coin where people’s reactions are the total opposite to how I’m sharing it. “First and foremost, I live for God now. Whatever He wants me to do, I believe His plans for me are better than whatever I can think. If that’s not to continue on playing, so be it.

“In saying that, obviously I love playing footy and if it goes down that path I’ll definitely miss it. But my faith in Jesus Christ is what comes first.”

1. For AUSTRALIA, give the following information:

2. For AUSTRALIA:
a) list the who, what, where and when of the news item
b) Folau was warned by the rugby union not to post comments disrespectful to anyone. What consequences does he face for disregarding the warning and posting that particular graphic?
c) Israel Folau is a superstar rugby player. He risks losing his career if he does not take back his post and apologize. His post was referencing a biblical passage (1 Corinthians 6:9). Read his explanation under “Background” below. What do you think of his decision? Explain your answer.
d) Do you think it is wrong for a famous person to express his religious beliefs on social media? (Christians also say the bible says that any person – regardless of how good they are – who does not repent of their sins and put their trust in Jesus Christ will not go to heaven. If they believe this to be true, is it wrong for them to say this to others?) Explain your answer.
e) Could the rugby union say they are not responsible for the social media posts of their players, or are they right to put limits on what a player can or cannot post? Explain your answer.

What was Folau’s response to being kicked out of the squad?

With the 2019 Rugby World cup looming, the decision could not have come at a worse time for the star player, who has made 73 appearances for his country.

However, instead of retracting his comments in hopes he might regain his place on the team, Folau has said he stands by “what the Bible says.”

“He’s a loving God and he wants people to turn away from what they’re living in and He’ll give them life,” the seasoned player told the Sydney Morning Herald Sunday after attending the Truth Of Jesus Christ Church in Sydney. “That’s the message that I’m trying to share, even though it comes across as harsh. I can’t change what the word of God says.”

Folau also expanded on his reasons for sharing the post.

“I share it with love,” he said. “I can see the other side of the coin where people’s reactions are the total opposite to how I’m sharing it.”

Regarding Rugby Australia’s decision, Folau said that while it is “obviously a decision that’s in the process,” he “believes in a God that’s in control of all things.”

“Whatever His will is, whether that’s to continue playing or not, I’m more than happy to do what He wants me to do,” he told the Herald.

“First and foremost, I live for God now,” he said. “Whatever He wants me to do, I believe His plans for me are better than whatever I can think. If that’s not to continue on playing, so be it.”

“Obviously I love playing footy,” he assured, “and if it goes down that path I’ll definitely miss it. But my faith in Jesus Christ is what comes first.” (by Will Maule, April 15 at Faithwire)