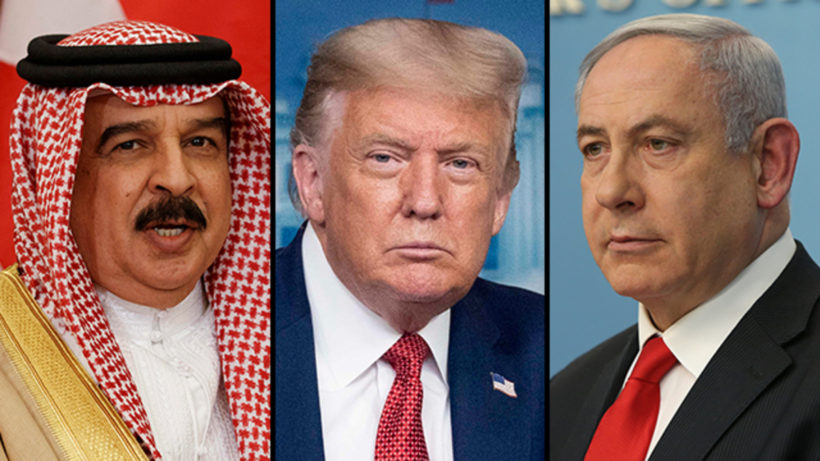 (from Indian news agency PTI at India Express) – President Donald Trump announced on Friday that Bahrain will become the second Gulf Arab nation to establish full diplomatic ties with Israel, the second peace deal in the region brokered by the administration in a month.

The announcement by Trump came after he hosted a historic call between Prime Minister Benjamin Netanyahu of Israel and King Hamad bin Isa Al Khalifa of Bahrain came a month after he had mediated between the United Arab Emirates and Israel to do the same.

Leaders of the UAE, Bahrain and Israel are meeting to sign agreements in a ceremony at the White House today.

In the spirit of peace and cooperation, Netanyahu and Al Khalifa agreed that Bahrain will fully normalize its diplomatic relations with Israel, Trump told reporters in the Oval Office of the White House.

They will exchange embassies and ambassadors, begin direct flights between their countries, and launch cooperation initiatives across a broad range of sectors, including health, business, technology, education, security, and agriculture. “This is a truly historic day,” he said.

Observing that there have been two peace agreements with Israel in the last 72 years (Egypt in 1979 and Jordan in 1994), the president said that this is now the second peace agreement that he has announced in the last month. “And I am very hopeful that there will be more to follow,” he said, adding that there’s tremendous enthusiasm on behalf of other countries to also join.

“And we think, ultimately, you’ll have most countries join, and you’re going to have the Palestinians in a very good position. They want to come in — they’re going to want to come in because all of their friends are in. But we have tremendous enthusiasm for coming into the deal,” he said.

“As more countries normalize relations with Israel — which will happen quite quickly, we believe — the region will become more and more stable, secure, and prosperous,” Trump said.

Trump’s special advisor and son-in-law Jared Kushner played a key role in securing both the agreements in the Middle East, which is expected to play an important role having a lasting peace in the region.

“What President Trump has done here is unthinkable. He’s brought people in the Middle East together. There’s been these barriers that have existed that have led to so much instability, so much war, so much loss, so much hopelessness. And we’re seeing so much hopefulness now coming,” he told reporters in the Oval Office of the White House.

The US Ambassador to Israel, David Friedman, said that Trump’s policy of “peace through strength” has changed the world profoundly for the better.

Later in a conference call with reporters, Kushner said that this deal will bring these countries closer together. It took Israel 72 years to form the first two peace agreements with Jordan and Egypt. “And then, in the last 29 days, we now have two more peace agreements, which shows that the region is really changing,” he said.

About two weeks ago, he took the first commercial flight between Israel and the United Arab Emirates. That flight flew over Saudi Arabia’s airspace, which they waived after 72 years. And they said that other commercial flights can take that route as well. The UAE just removed their 48-year boycott of Israel, he noted.

Referring to the two back-to-back agreements, Kushner described this as the beginning of a new Middle East. Trump has really secured alliances and partners in trying to pursue that, he added.

Describing this as a historic agreement, Secretary of State Mike Pompeo said that as the President has kept the promise that he laid out at the beginning of this Administration that he would strengthen America’s friendships and build new partnerships in pursuit of peace.

“The two peace agreements open new possibilities for peace and prosperity. From my recent travels to the region, there is clear momentum for a new Middle East. I thank King Hamad and Prime Minister Netanyahu for having the courage to change the fate of nations,” he said.

Reprinted here for educational purposes only. May not be reproduced on other websites without permission from India Express.

Read “President Donald J. Trump Has Brokered a Historic Deal Between Israel and the Kingdom of Bahrain” (Sept. 11, 2020)

Read “Remarks by President Trump on the Announcement of Normalization of Relations Between Israel and the Kingdom of Bahrain” (Sept. 11, 2020)

2. What provisions will be included in the agreement between Bahrain and Israel?

3. Why is any agreement between the two countries historic? — (Prior to the UAE and Bahrain agreements made in the past month, how many Muslim-majority countries have established diplomatic ties with Israel since its founding in 1948?)

4. What does President Trump expect to be the result of these peace deals?

5. How did David Friedman, the US Ambassador to Israel, describe President Trump’s foreign policy?

6. Today President Trump hosted Prime Minister Benjamin Netanyahu of Israel and the foreign ministers of United Arab Emirates and Bahrain at the White House for the formal signing of new diplomatic accords between them.
-Watch the video of Bahrain’s Foreign Minister Abdullatif Bin Rashid Al Zayani’s speech under “Resources” below.
-Watch the video of Israeli Prime Minister Netanyahu’s speech under “Resources” below.
a) What is the tone of Bahrain’s Foreign Minister’s speech?
b) How does this speech encourage you? 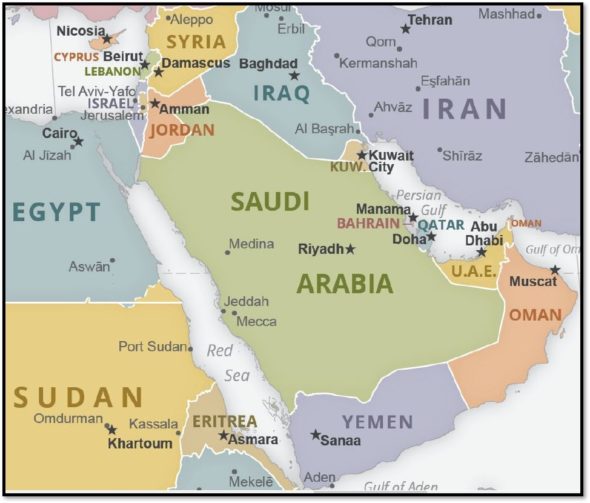 Reactions to the Bahrain-Israel peace agreement (from a Sept. 11 Reuters report):

Bahrain, a small island state, is home to the U.S. Navy’s regional headquarters. Saudi Arabia in 2011 sent troops to Bahrain to help quell an uprising and, alongside Kuwait and the UAE, in 2018 offered Bahrain a $10 billion economic bailout.

The forging of relations with Israel is happening against a backdrop of shared fears about the threat that Iran may pose to the region. The biggest question now is whether Saudi Arabia, one of the Middle East’s most influential countries and a close U.S. ally, will follow suit.

Trump’s administration has tried to coax other Sunni Arab countries, including Saudi Arabia, to engage with Israel. Saudi Arabia, a key Sunni rival to Shi’ite Iran, has so far signaled it is not ready.

Zaha Hassan, a visiting fellow at the Carnegie Endowment for International Peace, said Bahrain’s move was “especially disturbing” to Palestinians.

“This move could not happen without a Saudi green light,” she added. “(Saudi Arabia) is under pressure to normalize, but cannot because of its position as the custodian of Islam’s holy places and the unpopularity of it on the street level. …

At the Arab League on Wednesday, the Palestinians sought but did not obtain a condemnation of the UAE-Israel accord from fellow members. They did secure renewed Saudi support for their right to statehood.

TODAY:  Bahrain’s Foreign Minister, Abdullatif al-Zayani, spoke at the White House during the signing ceremony of the Abraham Accords, September 15, 2020: