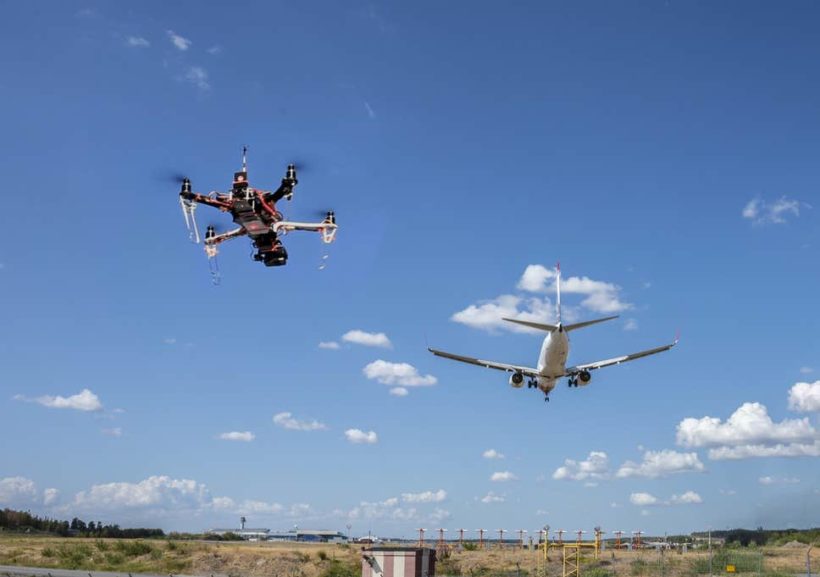 (by Nicholas Sakelaris, UPI) — A number of environmental activists were arrested in London Friday for attempting to fly drones inside restricted airspace at Heathrow Airport — a protest authorities called a serious safety risk, punishable by life in prison.

At least 19 demonstrators were arrested, police said in a statement.

The group Heathrow Pause, an offshoot of Extinction Rebellion, tweeted it had flown one drone at the airport, which is one of the world’s busiest. Friday’s demonstration opposes expansion plans at the [airport].

“At least one toy drone flight has happened within [Heathrow’s] exclusion zone,” the group tweeted early Friday. “No flights canceled yet but we have more pilots of toy drones who will keep trying….” 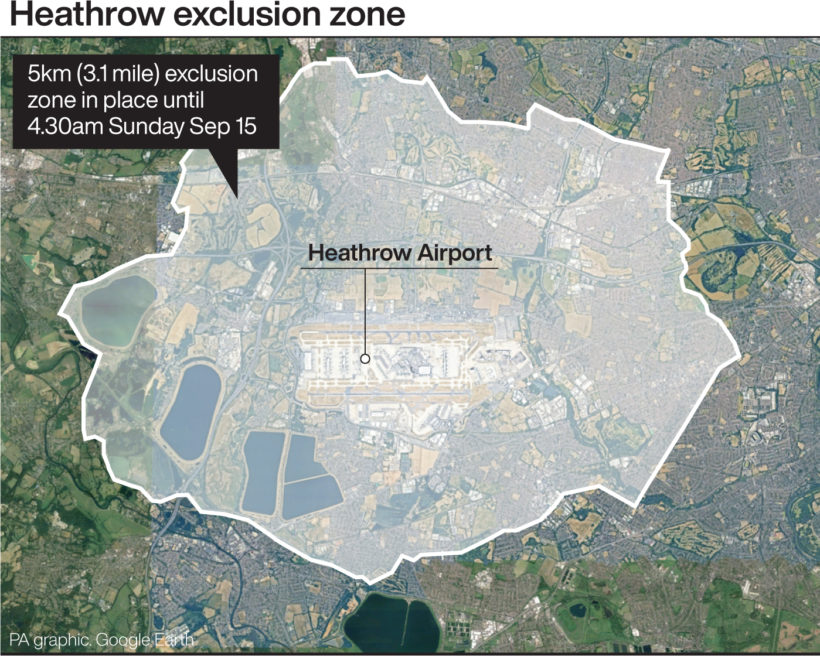 [Gizmodo reported: The activists said they wanted to illustrate the “dangerous folly” of expanding the airport. Building a third runway would enable 700 more flights out of Heathrow a day, contributing further to double-digit surges (26 percent) in the amount of carbon pollution European countries generate via air travel in the past five years.

In a manifesto, Heathrow Pause said that “It is a crime against humanity—and all life on earth—to support carbon intensive infrastructure projects.”]

The protesters were warned in advance that interfering with flights, and endangering passengers’ lives, could send them to prison for life. London police issued a 48-hour dispersal order early Friday for the area surrounding the airport.

“The order has been implemented to prevent criminal activity which poses a significant safety and security risk to the airport,” the department said.

Heathrow Airport said all runways were open as normal, and [said],  “We agree with the need for climate change action but illegal protest activity designed with the intention of disrupting thousands of people is not the answer.”

[Video uploaded to Twitter by the radical group showed at least one of the drones (unable to launch), with members of the group speculating that signal jammers were involved. Richard Gill of the Drone Defense jamming manufacturer told the Times of London said he did not know how the Metropolitan Police prevented the drones from taking off but that their approach may have changed since Christmas, when reports drones repeatedly disrupted travel at Gatwick Airport].

The group said hundreds of volunteers were willing to fly drones a few feet off the ground in Heathrow’s “no-fly” zone, but said the devices would rise no higher than head height, nowhere near flight paths.

“We will not give up and we urge all right-minded people to rise up with us,” it said in a tweet. “Don’t sleep walk into oblivion. Protect your children as if their lives depended on it. It does.”

The group had informed police and airport officials of its plans beforehand, and two people were also arrested for committing a public nuisance within the airport perimeter.

Heathrow Pause tweeted a video of one drone experiencing a “technical glitch,” and the group accusing the airport of using “signal jamming” to sabotage the machines.

Friday’s protest followed several Extinction Rebellion demonstrations in London this year, which disrupted London traffic over the course of several days — and interfered with London Fashion Week Friday, when “dead” supporters lay on the ground in buckets of fake blood. Five activists glued themselves to the main entrance to the show. The goal of that disruption was to call attention to the fashion industry’s supposed impact on climate change.

Published by UPI on September 13, 2019. Reprinted here for educational purposes only. May not be reproduced on other websites without permission from United Press International.

2. For THE UK (UNITED KINGDOM):
a) list the who, what, where and when of the news item
b) What are the protesters protesting against?
c) What was/is the goal of the ongoing protests?
d) UK law enacted in March 2019 states that any drone flying within five kilometers of an airport risks endangering aircraft. The exclusion zone was increased from one kilometer by the UK’s Civil Aviation Authority (CAA) after drones flown over Gatwick Airport grounded 1,000 flights, affecting 140,000 people in December 2018. What penalty do the protesters face for their crime?
e) If these activists are successful, they could down a plane and kill hundreds of people. Drones, just like birds, can down a plane. It’s very serious for people in the air and people on the ground. Is the penalty for this crime appropriate? Explain your answer.
f) Apart from endangering the lives of passengers, crew and people on the ground, flying drones at the airport could at the least ground planes and cause huge delays. The climate change activists do not want the airport to build a new runway to add more flights. They believe using fossil fuels for energy or fuel will destroy the earth. Should the airport capitulate to the protesters demands and stop its project to build a third runway? If the protesters are successful, should they go further and demand that the airport be shut down to end carbon emissions from airplanes? then the next airport and the one after that? Explain your answer.

Climate change: How did this all start?

This sounds very similar to today’s climate change debate – except, in the 70s, the fear was manmade global cooling, not warming.

Global cooling gained considerable traction with the general public. But then, instead of cooling as long predicted by manmade climate change advocates, the planet started warming again. Something had to be done to rescue the climate change agenda from utter disaster. Enter Al Gore. … (Read more at heartland.org)