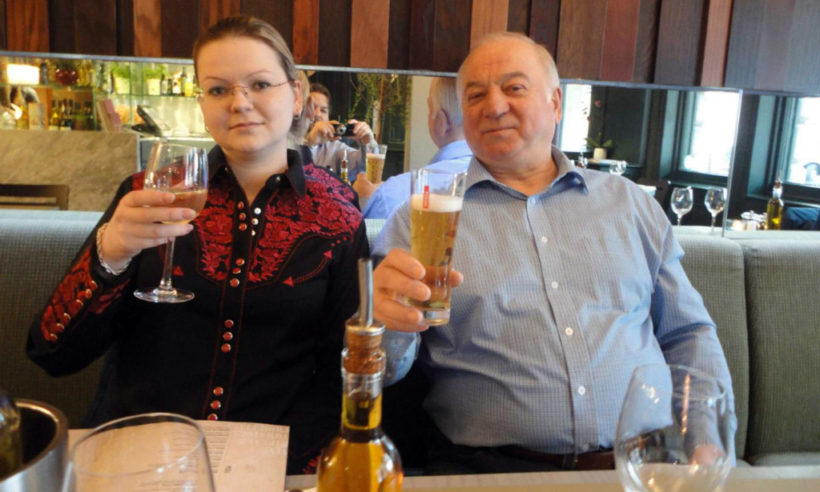 Former double-agent Sergei Skripal and his daughter Yulia were found unconscious on a park bench in Salisbury, England. The two had been poisoned with a nerve agent called Novichok, developed by Kremlin scientists several decades ago. They remain in critical condition.

(BBC News) – The United States and its European allies are expelling dozens of Russian diplomats in a co-ordinated response to the poisoning of a former Russian spy in the UK.

It is said to be the largest collective expulsion of Russian intelligence officers [spies] in history.

More than 20 countries have aligned with the UK, expelling 130 diplomats. [In addition to the U.S., 16 EU countries and five other non-EU members gave Russians notice to leave. At least two other EU members followed suit on Monday.]

Russia vowed to retaliate to the “provocative gesture.”

Russia denies any role in the attack on Sergei Skripal and his daughter, Yulia, in Salisbury, southern England. The pair remain in a critical but stable condition in hospital.

EU leaders agreed last week it was highly likely Russia was behind the nerve-agent poisoning.

British Prime Minister Teresa May said: “President Putin’s regime is carrying out acts of aggression against our shared values and interests within our continent and beyond. If the Kremlin’s goal is to divide and intimidate the Western alliance, then their efforts have spectacularly backfired.”

[Mrs. May said the unprecedented show of solidarity – which outstripped even Downing Street’s expectations after days of intense diplomacy – sent the “strongest signal” to the Kremlin that Russia “cannot continue to flout international law and threaten our security.”

The White House said Mr. Putin could no longer be in any doubt that “actions have consequences.”]

The international response to the Salisbury attacks, which follows Mrs May’s decision to expel 23 Russian diplomats from London earlier this week, was described by experts as a “heavy blow” to Russian intelligence-gathering.]

The Russian foreign ministry said the moves demonstrated a continuation of a “confrontational path.”

“It goes without saying that this unfriendly act by this group of countries will not go without notice and we will react to it,” its statement said.

…Whatever the denials, Britain’s allies have clearly accepted its view that the use of a military grade nerve agent in Salisbury was “highly likely” the work of the Russian state.

The collective expulsions from the US and EU member states is a remarkable show of solidarity with Britain, even more so because it comes at a time when UK-EU relations are strained due to the Brexit negotiations.

EU head Donald Tusk’s note that there could be “additional measures” is a signal to Moscow as it considers how it will respond. …

[Some 48 diplomats at the Russian embassy in the U.S. have been asked to leave and 12 Russians who work at the United Nations. The Russian consulate in Seattle will also be closed.

Senior U.S. administration officials said the Russians being expelled were intelligence officers who are being “cloaked” by their diplomatic status.

The U.S. officials accused Russia of a “reckless attempt” to murder British citizens on UK soil and said the attack would not go unpunished. ]

From a March 26 report at BBC News. Reprinted here for educational purposes only.

2. For RUSSIA:
a) list the who, what, where and when of the news item
b) What is the significance of the expulsions?
c) What has Russia’s reaction been?

Who is expelling diplomats?

The UK announced it was expelling 23 Russian diplomats earlier this month.

Various countries announced they were making the same move in solidarity on Monday. These are:

Iceland has also announced it is suspending high-level dialogue with Russian authorities, and its leaders will not attend the World Cup, which starts in Russia in June.

The UK said earlier this month it would not send ministers or members of the Royal Family to the football tournament.

EU countries that have said they have no intention of expelling diplomats include Austria, Greece and Portugal, although all have said they support the UK and condemn the poisoning.

Why are they doing it?

President of the European Council Donald Tusk said the EU states had decided to expel Russian diplomats as a direct result of a meeting, held last week about the Salisbury poisoning.

“Additional measures, including further expulsions within this common EU framework are not to be excluded in the coming days and weeks,” he said.

The US state department said in a statement: “On March 4, Russia used a military-grade nerve agent to attempt to murder a British citizen and his daughter in Salisbury.

“This attack on our Ally the United Kingdom put countless innocent lives at risk and resulted in serious injury to three people, including a police officer.”

It called the attack an “outrageous violation of the Chemical Weapons Convention and breach of international law”.

The US is expelling 48 envoys at the Russian embassy in Washington and 12 more at the UN in New York. It will also order the closure of the Russian consulate in Seattle.