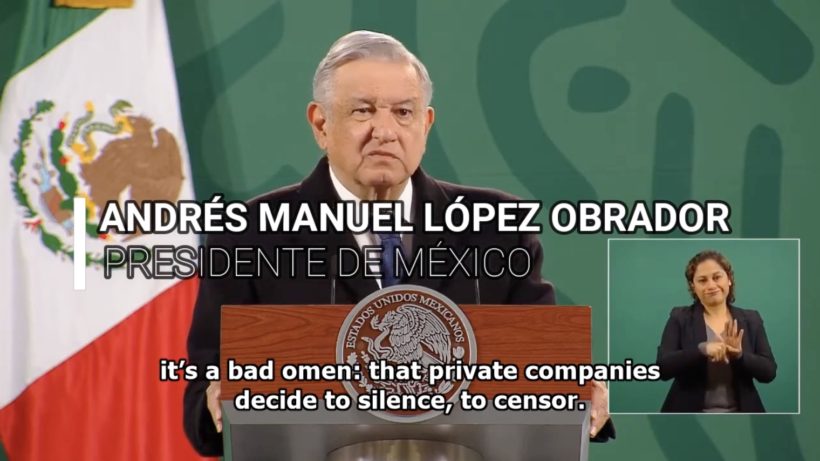 (by Mark Stevenson, Associated Press) — MEXICO CITY (AP) — Mexico’s president vowed Thursday to lead an international effort to combat what he considers censorship by social media companies that have blocked or suspended the accounts of U.S. President Donald Trump.

President Andrés Manuel López Obrador, a left-leaning politician, is reaching out to other governments to form a common front on the issue.

“I can tell you that at the first G20 meeting we have, I am going to make a proposal on this issue,” López Obrador said. “Yes, social media should not be used to incite violence and all that, but this cannot be used as a pretext* to suspend freedom of expression.” [*A pretext is a pretended reason for doing something that is used to hide the real reason]

“How can a company act as if it was all powerful, omnipotent, as a sort of Spanish Inquisition on what is expressed?” he asked.

[“I don’t like anybody being censored or taking away from the right to post a message on Twitter or Face(book). I don’t agree with that, I don’t accept that,” López Obrador said.

“How can you censor someone: ‘Let’s see, I, as the judge of the Holy Inquisition, will punish you because I think what you’re saying is harmful,’” he continued. “Where is the law, where is the regulation, what are the norms? This is an issue of government, this is not an issue for private companies].”

“Given that Mexico, through our president, has spoken out, we immediately made contact with others who think the same,” Ebrard said, noting they had heard from officials in France, Germany, the European Union, Africa, Latin America and Southeast Asia.

“The president’s orders are to make contact with all of them, share this concern and work on coming up with a joint proposal,” Ebrard said. “We will see what is proposed.”

German Chancellor Angela Merkel is among those who have publicly criticized the action against President Trump. Her spokesman said Monday the German leader found it “problematic” that corporate managers could deny someone access under rules not defined by law.

Poland’s prime minister, Mateusz Morawiecki, later called for new regulations that would govern the use of Facebook, Twitter and Instagram in the European Union. Without mentioning [the censoring/banning of President Trump], he said that “the owners of corporate giants should not decide which views are right and which are not.”

France’s Finance Minister Bruno Le Maire earlier said that the state should be responsible for regulations, rather than “the digital oligarchy,” and called big tech “one of the threats” to democracy.

…On Tuesday, López Obrador posted an invitation on Facebook — the platform he most frequently uses — for his followers to switch to Telegram. [Telegram is online messaging app that works just like  Facebook Messenger].

Jesús Ramírez Cuevas, the president’s spokesman, said the Telegram account has been open for a while, suggesting the switch was not related to Twitter, Facebook and other media platforms acting against President Trump after a mob of his supporters broke into the U.S. Capitol on Jan. 6, accusing him of inciting the violence.

“Facebook’s decision to silence the current leader of the United States calls for a debate on freedom of expression, the free exchange of information on the web, democracy and the role of the companies that administer (social) networks.”

Social media companies banned, blocked and/or censored Trump after a riot broke out at the U.S. Capitol Building on Wednesday while the president was speaking at a rally of supporters that was being held near the White House the day Congress was meeting to certify the Electoral College results. Over 100 Republican representatives and 12 Republican senators were objecting to the results, asserting possible election fraud.  It is typical for a few congress members to raise objections – the number here was unprecedented.]

López Obrador says private companies should not have the right to decide who can speak. …

From Associated Press (AP), published Jan. 14. Reprinted here for educational purposes only. May not be reproduced on other websites without permission.

NOTE: Before answering the following questions, read the info under “Background” and “Resources” below.

3. What is the López Obrador’s administration’s goal?

4. Wikipedia notes López Obrador is often described as a center-left progressive democrat and economic nationalist. What do you think of his criticism of big tech’s ban/censorship of President Trump?

5. Consider the points made by left-leaning president of Mexico, as well as those of several other world leaders. Also read the statements by Russian opposition leader Alexei Navalny, a fierce critic of Russian President Vladimir Putin (and also no fan of Trump). What is your reaction to the public criticism by these foreign leaders?

“I think that the ban of Donald Trump on Twitter is an unacceptable act of censorship. … The ban on Twitter is a decision of people we don’t know in accordance with a procedure we don’t know.  In my opinion, the decision to ban Trump was based on emotions and personal political preferences. Don’t tell me he was banned for violating Twitter rules. I get death threats here every day for many years, and Twitter doesn’t ban anyone.”

“Among the people who have Twitter accounts are cold-blooded murderers (Putin or Maduro) and liars and thieves (Medvedev). For many years, Twitter, Facebook and Instagram have been used as a base for Putin’s ‘troll factory’ and similar groups from other authoritarian countries,” he continued. “Those who denied COVID-19 exist freely and communicate on Twitter. Their words have cost thousands of lives. And yet, it was Trump who got banned publicly and ostentatiously. Such selectivity indicates that this was an act of censorship.”

Watch Jan. 8, 2021 comments by Mexican President Andrés Manuel López Obrador in which he denounces the Facebook censorship of President Donald Trump as a new “Holy Inquisition” designed to “create a world government with the power to control social networks, a world media power.”