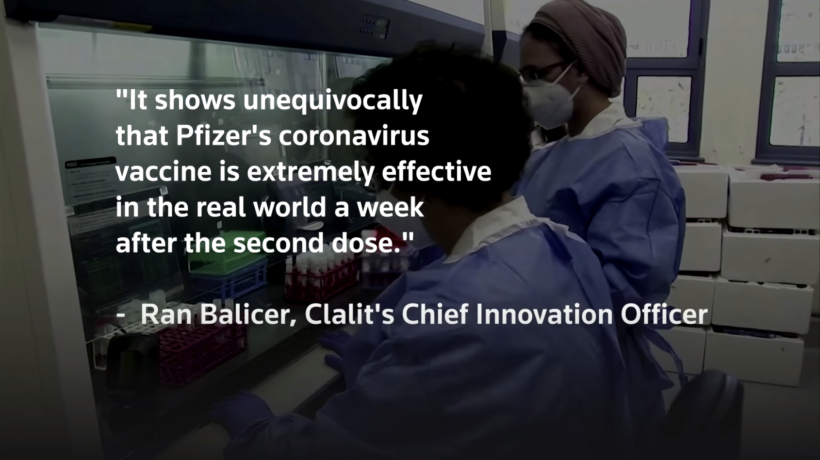 (Compiled from Reuters, The Times of Israel and CBS News) — JERUSALEM- Israel’s largest healthcare provider on Sunday reported a 94% drop in symptomatic COVID-19 infections among 600,000 people who received two doses of the Pfizer’s vaccine in the country’s biggest study to date.

Healthcare provider (HMO) Clalit, which covers more than half of all Israelis, said the same group was also 92% less likely to develop severe illness from the virus.

The study reviewed 600,000 people who’ve received the second dose of the Pfizer vaccine and compared them to 600,000 people not yet vaccinated. The study compared vaccinated individuals to unvaccinated ones with similar medical histories, allowing a very detailed examination of the vaccine’s effect, the HMO says.

“It shows unequivocally that Pfizer’s coronavirus vaccine is extremely effective in the real world a week after the second dose, just as it was found to be in the clinical study,” said Ran Balicer, Clalit’s chief innovation officer.

He added that the data indicates the Pfizer vaccine, which was developed in partnership with Germany’s BioNTech, is even more effective two weeks or more after the second shot.

The study also shows the vaccine is as effective in people over 70 as it is in younger individuals.

The Clalit study follows one by the Maccabi HMO published last week that showed that of half a million people vaccinated with both doses of the Pfizer vaccine, only 544 people — or 0.1% — were subsequently diagnosed with coronavirus, only four suffered severe illness, and none died.

Israel has been conducting a rapid vaccine rollout and its database offers insights into vaccine effectiveness and at what point countries might attain herd immunity.

Israel launched its COVID-19 vaccine campaign in December. Since then, more than a quarter of the population — 2.5 million people — have received two doses of the Pfizer-BioNTech vaccine, and over 42% have received the first shot, according to the Health Ministry.

The country of 9 million people, which is currently easing restrictions imposed during its third nationwide lockdown, is aiming to vaccinate everyone over the age of 16 by the end of March.

“The publication of preliminary results at this stage is intended to emphasise to the unvaccinated population that the vaccine is highly effective and prevents serious morbidity,” Clalit said Sunday.

It added that the study covered people who had received the second shot at least seven days before being tested, and would be expanded in future.

“With each additional week that passes, we will be able to make the assessment more accurate.”

Accuracy would improve as subjects are tested after 14 days or more from the second dose, it said.

Compiled from reports on Feb. 14 by Ari Rabinovitch and Maayan Lubell at Reuters, the Times of Israel and CBS News. Reprinted here for educational purposes only. May not be reproduced on other websites without permission.

2. What are the size of the study’s groups? For what reason did Clalit use groups with similar medical histories?

3. What did the researchers conclude from the study — What were its findings?

4. What did a separate study by Israel’s healthcare provider Maccabi show?

5. What is Clalit’s reason for publishing the preliminary results?

7. How, if at all, would these studies affect your view of Pfizer and other covid vaccines? Explain your answer.