World #1 – Israeli law allows names of unvaccinated to be shared 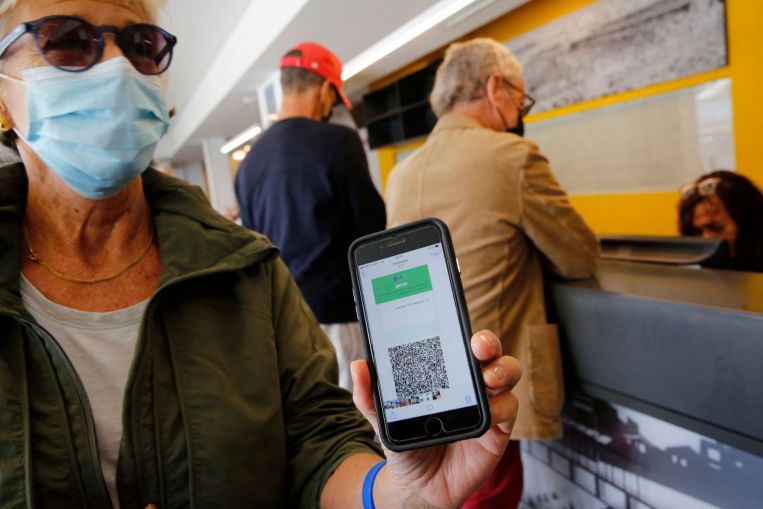 A woman shows her "green pass" (proof of being fully vaccinated) before entering a gym and pool facility in Tel Aviv on Feb 21, 2021. (Photo: AFP)

(Agence France-Presse) — Israel’s parliament passed a law Wednesday (Feb. 24) allowing the government to [temporarily] share the identities of people not vaccinated against the coronavirus with other authorities, raising privacy concerns for those opting out of inoculation.

The measure, which passed with 30 votes for and 13 against, gives local governments, the director general of the education ministry and some in the welfare ministry the right to receive the names, addresses and phone numbers of unvaccinated citizens.

The objective of the measure — valid for three months or until the Covid-19 pandemic is declared over — is “to enable these bodies to encourage people to vaccinate by personally addressing them,” a parliament statement said.

Israel, a country of nine million people, has administered the two recommended shots of the Pfizer/BioNTech vaccine against the coronavirus to roughly a third of its population.

As it emerges from lockdown, the country is restricting certain services including access to gyms and indoor dining to the vaccinated only, giving a so-called green pass to the fully inoculated.

That too has raised concerns about unequal access for those exercising their right to not be vaccinated.

During debate on the measure, Labor party leader Merav Michaeli accused right-wing Prime Minister Benjamin Netanyahu of “denying citizens their right to the privacy of their medical information.”

The statement from the parliament, or Knesset, said the personal information cannot be used for any purpose other than encouraging people to be vaccinated.

“The information will be deleted after its use within 60 days,” according to the law, and “a person who was contacted can demand that his details be deleted and that they not be contacted again.”

Haim Katz of Netanyahu’s Likud party defended the law as a means to promote vaccination.

“I’ve been asked what about people’s privacy: Is privacy more important than life itself?” Katz said in parliament, stressing the information would include nothing beyond the question of whether or not the person was vaccinated.

At a news conference, Netanyahu later called on Israeli citizens to be vaccinated in order to “return to normal life.”

The prime minister deplored misleading news about the vaccine, and said Israel aimed to fully inoculate 6.2 million people before the beginning of April.

Israel has officially recorded more than 760,000 coronavirus cases and over 5,600 deaths since the start of the pandemic.

Published by AFP (Agence France-Presse) on Feb. 24, 2021. Reprinted here for educational purposes only. May not be reproduced on other websites without permission.

2. What specific information does the law allow local government and those from the education and welfare ministries to access?

3. a) What is the purpose of the law?
b) For how long will the law be in effect?

4. a) What other covid-related action has the government taken that has caused citizens concern?
b) Ask a parent: do you think President Biden should push for a similar law? Please explain your answer.

5. What assurance has the Knesset (Israeli parliament) given to citizens regarding concerns over privacy?

6. With whom do you agree: Labor party leader Merav Michaeli or Prime Minister Benjamin Netanyahu and Haim Katz of Netanyahu’s Likud party? Explain your answer.

7. Watch the videos under “Resources” below. Do you think a covid vaccine should be required to keep your job? to attend school? to attend an indoor or outdoor sporting event? — At what point is it government overreach? Going forward, should citizens be required to have a flu vaccine for the same activities? (many people die from the flu each year)