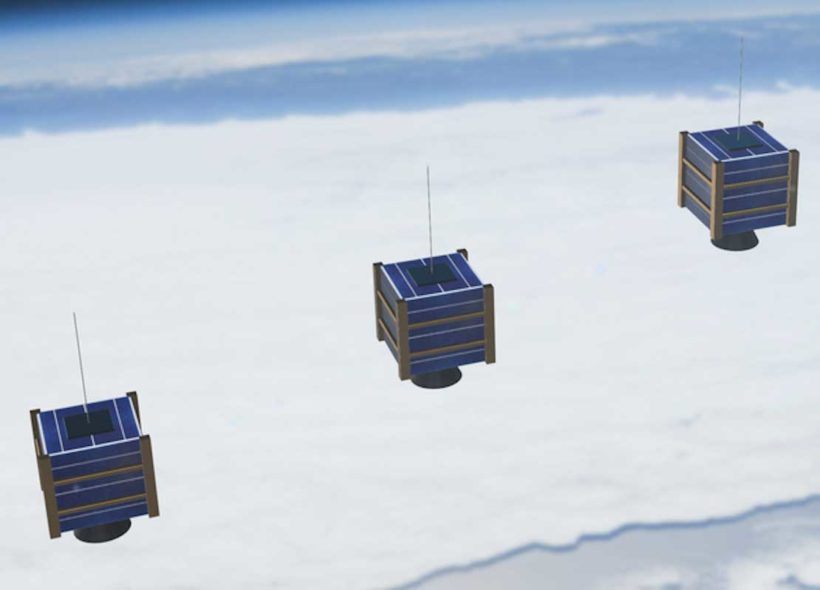 (by Nathan Jeffay, The Times of Israel) — Three nanosatellites developed by Israeli scientists aimed at testing an alternative way of providing emergency location services were launched into orbit on Monday from the Baikonur Cosmodrome in Kazakhstan.

The launch…succeeded in sending 38 small satellites from 18 countries on their way to space.

The shoebox-sized Israeli satellites, made by the Technion — Israel Institute of Technology, will be placed in an orbit 372 miles above the surface of the planet for a three-year orbit.

The satellites are being launched to test whether a series of small satellites, instead of a single large satellite, can be used to monitor signals from emergency locator beacons used by ships, planes, explorers and hikers. If it is possible, researchers say it could pave the way for much cheaper monitoring of these systems.

“This is a significant step forward for Israeli space research and technology,” aerospace engineer Pini Gurfil, the mastermind behind the project, told The Times of Israel in a recent interview. “This opens new possibilities for locator beacons, and for the miniaturization of satellites which is an important focus internationally, and seen as a disruptive innovation.” [A disruptive innovation is a technology whose application significantly affects the way a market or industry functions].

The trio of satellites will be kept in perfect formation, less than 155 miles apart, thanks to minute on-board navigators.

A specially built fuel system, developed at the Technion along with the rest of the tech onboard, will allow each satellite to complete its mission on 400 grams of krypton, the gas often used to fill fluorescent light bulbs. This averages 133 grams of fuel per year, or 0.37 grams per satellite per day.

The Technion team believes that having three separate satellites located relatively close to one another, each following the location of beacons, will deliver high-accuracy readings. It will be testing the theory with its “low-cost” $9 million satellite trio, funded by the Adelis Foundation and the Israeli Space Agency, which has been in development for almost 10 years.

Gurfil said the fuel efficiency has been achieved by designing the satellites to harness natural forces to maneuver.

“The Earth’s gravity propels them forward, meaning that only minimal fuel is needed for their actual orbit,” said Gurfil. “This is normal for satellites, but what is special is that these satellites also use minimal fuel to control and navigate.

“This is because they very effectively harness natural forces like gravity and atmospheric resistance to find their way. For 10 years we’ve been researching how to fly satellites in a formation without them drifting apart due to natural forces, and in a fuel-efficient way. Now we are ready to launch, and we’re moved and excited.”

“It has taken so long to develop these satellites, especially the tiny fuel system, and this is the first launch of three satellites together by Israel, so all of this is meaningful.”

Israel has already staked a place in the growing field of nanosatellites with several single-satellite launches, including one last month. Gurfil’s team hopes the ambitious three-satellite plan will further bolster Israel’s standing in the global push toward tiny satellites.

Published at timesofisrael .con March 122. Reprinted here for educational purposes only. May not be reproduced on other websites without permission.

2. For how long will the shoebox-sized satellites orbit the earth?

3. a) What is the goal for these tiny satellites?
b) What benefit would these nano satellites offer if successful?

4. How long did it take the engineers to develop these satellites?

6. Pinin Gurfil is a professor of aerospace engineering and the director of the Asher Space Research Institute at Technion who led the team in developing the satellites. Re-read paragraphs 9-11. What is your reaction to the fuel efficiency these engineers have developed for these satellites?

For the three satellites to travel in formation and fulfill their missions, each was installed with sensors, antennae, computer systems, control systems, navigation devices, a unique and innovative propulsion system, and a mission receiver developed by Israel Aircraft Industries (IAI).  Satellite tracking and data collection is take place at the Technion’s mission control center, which was inaugurated in 2018. The center contains an array of Israeli-made antennae manufactured by “Orbit,” which will maintain continuous communication with the satellites.

Watch a December 2020 report from Israel: