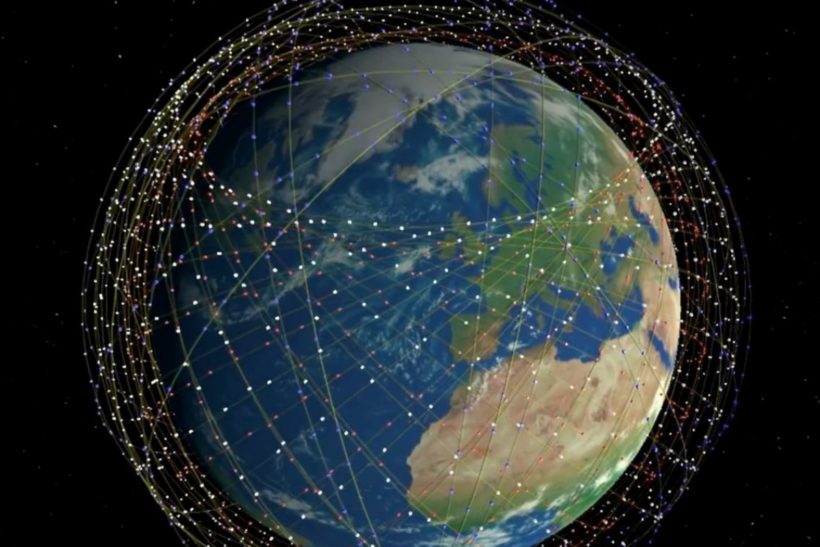 (Agence France-Presse at France24) — To realize his dream of satellite-powered internet, tech billionaire Elon Musk needs to install antennas around the world. In northern France, a village hopes he’ll decide to keep those antennas far away.

Saint-Senier-de-Beuvron, population 350, is none too thrilled to have been picked as a ground station for Musk’s Starlink project for broadband from space.

“This project is totally new. We don’t have any idea of the impact of these signals,” said Noemie Brault, a 34-year-old deputy mayor of the village just 12 miles from the majestic Mont Saint-Michel abbey on the English Channel.

“As a precaution the municipal council said no,” she explained.

Musk, founder of SpaceX and electric carmaker Tesla, plans to deploy [40,000] satellites to provide fast internet for remote areas anywhere in the world.

It’s a high-stakes battle he is waging with fellow billionaire Jeff Bezos of Amazon as well as the London-based start-up OneWeb.

Antennas on the ground will capture the signals and relay them to individual user terminals connected by cable. 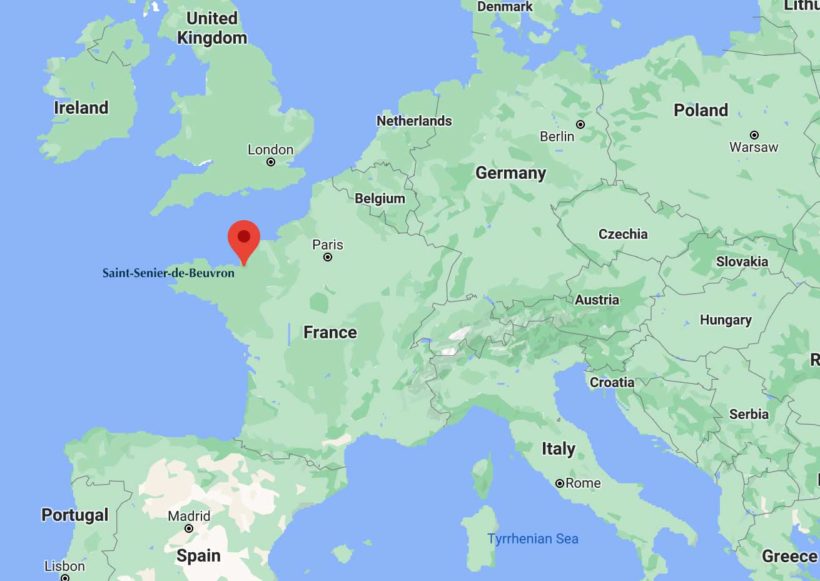 In December, Saint-Senier issued a decree to block construction on the field.

But the refusal was based on a technicality, and the contractor, Sipartech, told AFP that it plans to refile its request, which the council will likely be unable to block.

“That worries us because we have no data” on the eventual effects of the signals on the health of humans or animals, said Brault, herself a farmer.

“And when you hear that he wants to implant a chip in people’s brains, it’s frightening,” she said, referring to Musk’s Neuralink project [which is a totally separate project].

“The risks from electromagnetic waves is something we’ve already seen with high-voltage power lines, which have disturbed lots of farmers in the area,” he said.

Besides, “social networks, internet, they exist already—why do we need to go look for internet on the moon?” he said.

France’s national radio frequency agency ANFR, which approved Starlink’s stations, says they present no risks to residents, not least because they will be emitting straight up into the sky.

There are already around 100 similar sites across France dating from the first satellite launches from 50 years ago, it adds. …

“We’re not attacking Elon Musk,” said Anne-Marie Falguieres, who lives just 60 metres from the future Starlink station with her husband and two children.

“We’re not technophobes. I’m a guide on the bay, I have an internet site, my husband works from home. But these antennas are completely new, at least in France, and we want to know if they’re dangerous or not,” she said.

She also thinks the project is hardly necessary and unlikely to interest many, based on reports from the US.

“In the testing phase, they made you pay $500 for the dish and then you had to pay $100 a month for a subscription,” she said. “I don’t think everyone’s going to be able to pay that.”

Published from a report by Agence France-Presse at France24 on Feb. 19. Reprinted here for educational purposes only. May not be reproduced on other websites without permission.

2. a) Why has the council of Saint-Senier-de-Beuvron rejected the antenna installation? (And why are other residents opposed?)
b) Do you think the opposition is justified? Explain your answer.
c) Do you think your answer would be different if you lived in an area close to where some of the antennas were being installed? Please explain.

3. a) What is the purpose of the Starlink project?
b) How does it differ from previous satellite internet providers?

4. Why will Saint-Senier-de-Beuvron’s rejection of Starlink ultimately fail?

6. What do you think of this effort to provide high speed internet access to rural and remote areas? Should it be done? Is this the best way to do so? Is there any other way to do so?

What is Elon Musk doing?

SpaceX’s Starlink aims to improve satellite internet access worldwide.  — As of May 2020, Starlink had over 400 satellites in orbit of a planned 40,000.

In the near term, Mr. Musk has said his goal for Starlink is to get to communities that have had almost no internet options until now. …

Starlink has always been a solution to help mostly rural, underserved communities. While rollouts of faster and better internet infrastructure have started in cities—often in university towns and government laboratory areas—places with small populations and no research facilities are last in the pecking order. Something like a third of rural Americans still don’t have high-speed internet as an option.

The broadband internet network that covers the U.S. is like a circulatory system. Major arteries run from big city to big city, then smaller branches cover those cities and extend to nearby suburbs and exurbs. Hubs in those smaller cities branch out to reach more towns.

People in the smallest communities, whether unincorporated developments or farmhouses, must often be reached one at a time. They end up being the costliest places to reach with service.

To circumvent that entire system, Musk and satellite internet providers before him have simply put internet into space—so instead of waiting for a physical line to reach them, these customers have internet rain on them from above. Like satellite TV, this has always been wireless by nature. But to put enough satellites in orbit to cover the world requires a huge investment in infrastructure in space. This is where Musk’s planned thousands of Starlink satellites have an advantage.

When Musk says high altitudes first, he’s addressing a specific problem that satellite internet has had for decades. Because of the way most satellites orbit, these services have been much better for people at lower latitudes. Commercials for these services, in the Northern Hemisphere at least, say outright that “all you need is a view of the southern sky.” But half the world’s population lives above 27 degrees of latitude—that’s nearly four degrees higher than even the Tropic of Cancer.

Musk’s secret weapon is quantity. By putting tens of thousands of satellites in orbit and connecting them in a network with one another, he says he can ensure smart global coverage in a way no one ever has. Each solar-powered Starlink satellite will have sensors and thrusters so it can detect its location and stay in line.

Musk also says these satellites will safely deorbit at end of life without leaving behind unnecessary space garbage. (April 24, 2020 at MSN .com by Caroline Delbert)

SpaceX CEO Elon Musk said the company’s Starlink satellite internet service “will double” speeds to customers “later this year,” as it continues to build out the global consumer network.

“Speed will double to ~300Mb/s & latency* will drop to ~20ms later this year,” Musk said in a tweet on Monday, responding to a user who showed speed tests ranging between 77 and 130 Mbps.

*Latency is the amount of delay in an internet network, defining how much time it takes a signal to travel back and forth from a destination. Latency and download speeds are key measures for an internet service provider.

In a following tweet, Musk added that Starlink will reach customers around “most” of the Earth by the end of 2021 and is expecting to have complete global coverage “by next year.”

He emphasized that Starlink, like other satellite broadband services, is intended for customers in “low to medium population density area.”  “Cellular will always have the advantage in dense urban areas,” Musk said. (Feb. 22, 2012, CNBC)

From CNBC: Why earth’s orbit could soon be very crowded
(Behind SpaceX and Amazon plans to launch thousands of satellites):