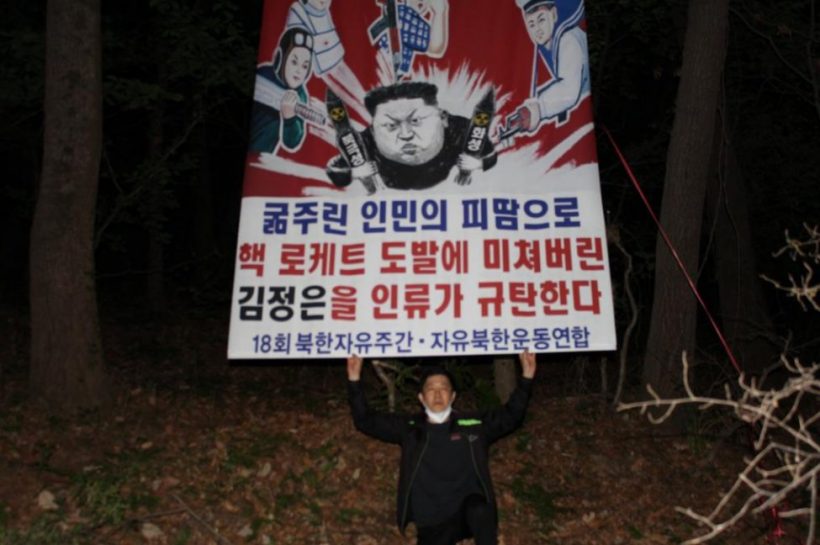 Fighters for Free North Korea, led by high-profile defector Park Sang-hak, sent 500,000 leaflets, 500 booklets [critical of North Korean leader Kim Jong Un’s government] and $5,000 in one-dollar bills attached to 10 large balloons into the reclusive state, Park said in a statement. He [said] the group carried out the mission in secret on two occasions between Sunday and Thursday at locations in Gyeonggi and Gangwon Provinces next to the DMZ [Demilitarized Zone – a 2.5-mile wide buffer zone between the two Koreas].

The action came after a South Korean anti-leafleting law went into effect in March. Violators face a maximum prison term of three years or a fine of $27,000. [The law has invited criticism South Korea is sacrificing freedom of expression to improve ties with rival North Korea, which has repeatedly protested the leafleting].

Park told UPI that he received a call on Friday from South Korea’s Ministry of Unification, which handles cross-border affairs, telling him that the police would be contacting him.

“It doesn’t matter to me if they put me in jail,” Park said. “I don’t have any legal defense ready. I’m just going to continue to push for what I think is right.”

“Though (authorities) can handcuff and put me to a prison cell, they cannot stop (my leafleting) with whatever threats or violence as long as the North Korean people waits for the letters of freedom, truth and hopes.”

A spokesperson for the Ministry of Unification told UPI that the ministry had not verified whether the balloon launches took place and was awaiting the results of a police investigation before taking any further steps.

In his statement, Park called South Korea’s anti-leafleting legislation “the worst law” that “sides with cruel human rights abuser Kim Jong Un and covers the eyes and ears of the North Korean people that have become the modern-day slaves of the Kim dynasty.”  He vowed he would continue to defy it.

“Not three years in prison, or 30 years, or even hanging from the gallows will stop us from telling the facts and the truth to 20 million North Koreans who are poor, hungry and without any rights,” Park said.

Video released by Park showed him releasing a balloon with leaflets toward a dark sky and showed him standing in the woods with a sign that partly reads, “The world condemns Kim Jong Un who is crazy for nuclear and rocket provocations.”  (StudentNewsDaily was unable to find the video – The Associated Press did not link to it – why not?)

The ban has sparked controversy, with some calling it a form of censorship amid ongoing efforts by the administration of South Korean President Moon Jae-in to improve ties with Pyongyang.

At a U.S. congressional hearing earlier this month, lawmakers urged South Korea to revisit the anti-leafleting ban. Rep. Chris Smith, R-N.J., called the law “an attack on free speech,” and said it was “very troubling.”

On Thursday, U.S. State Department spokesman Ned Price praised “the courage of the North Korean defector and human rights community” and said the United States “will always support their efforts to shine a spotlight on these grave injustices.”

Pyongyang severed all communications with Seoul and blew up an inter-Korean liaison office in June over what it called South Korea’s failure to rein in the [N. Korean] defectors.

In his statement, Park accused Moon of “standing on the side of Kim Jong Un” in backing the anti-leafleting law.

“Don’t the North Koreans, who have been robbed of all human rights by the tyranny of [Kim Jong Un], at least have the right to know the truth?” Park said. “Is this Seoul? Is it Pyongyang? Is South Korea a free democracy? Is it a totalitarian dictatorship?”

Published at UPI .com on April 30, 2021. With excerpts from an Associated Press report included. Reprinted here for educational purposes only. May not be reproduced on other websites without permission.

2. What did the Fighters for Free North Korea send with the balloons?

3. What is the punishment for violating the South Korean law, which went into effect in March 2021?

4. a) How did Mr. Park react to the possibility that he would be imprisoned after a call from South Korea’s Ministry of Unification telling him police would be contacting him over his balloon launch? Be specific.
b) How did Mr. Park describe the anti-leafleting law that bans South Koreans from sending any information into North Korea?

6. How would you describe North Korean defector Park Sang-hak and his work to inform and help his fellow countrymen?

But several groups led by defectors, including some aided by allies in the US, have long sent flyers along with food, dollar bills, mini radios and USB sticks of South Korean news and dramas into the north via balloons over the border or bottles by river.

North Korea, angered by these actions, has amassed a pile of leaflets “as big as a mountain” denouncing South Korea and North Korean defectors that they will soon launch into South Korea, state news agency KCNA reported.

The anti-leafleting legislation was passed in December by South Korea’s Parliament, where lawmakers supporting President Moon Jae-in’s engagement policy on North Korea hold a three-fifths supermajority. It went into effect in March.

It’s the first South Korean law that formally bans civilians from floating anti-North Korea leaflets across border. South Korea has previously banned such activities only during sensitive times in inter-Korean relations and normally allowed activists to exercise their freedom of speech despite repeated protests from North Korea.