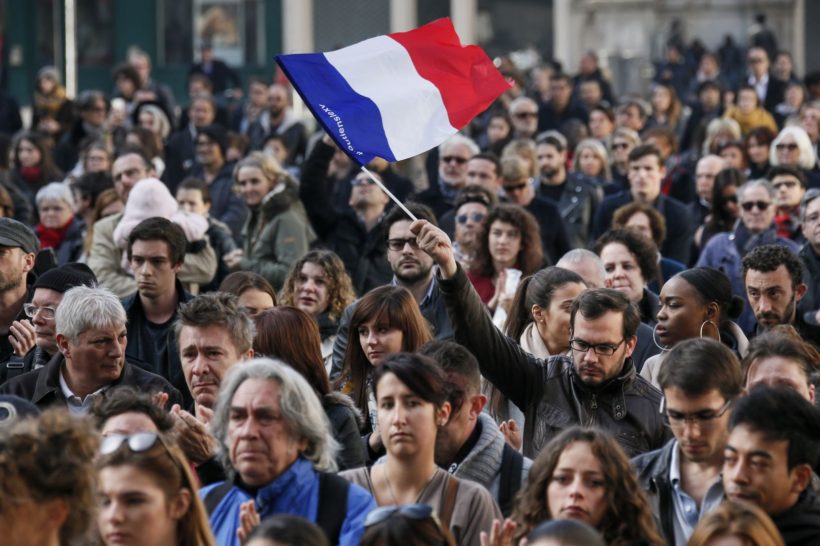 (by Chine Labbe and Crispian Balmer, Reuters) PARIS — French President Francois Hollande called on the United States and Russia to join a global coalition to destroy Islamic State in the wake of the attacks across Paris, and announced a wave of measures to combat terror in France.

“France is at war,” Hollande told a joint session of French parliament at the Palace of Versailles, promising to increase funds for national security and strengthen anti-terror laws in response to the suicide bombings and shootings that killed 129.

“We’re not engaged in a war of civilizations, because these assassins do not represent any. We are in a war against jihadist terrorism which is threatening the whole world,” he told a packed, sombre* chamber. [*sombre is defined as sad and serious]

Parliamentarians gave Hollande a standing ovation before spontaneously singing the “Marseillaise” [French] national anthem in a show of political unity following the worst atrocity* France has seen since World War Two. [*an atrocity is: an extremely wicked or cruel act, typically one involving physical violence or injury]

Islamic State [ISIS] has claimed responsibility for Friday’s coordinated attacks, saying they were in retaliation [revenge] for France’s involvement in U.S.-backed air strikes in Iraq and Syria.

Hollande pledged that French fighter jets would intensify their assaults and said he would meet U.S. President Barack Obama and Russian President Vladimir Putin in the coming days to urge them to pool their resources.

“We must combine our forces to achieve a result that is already too late in coming,” the president said.

The U.S.-led coalition has been bombing Islamic State for more than a year. Russia joined the conflict in September, but Western officials say it has mainly hit foreign-backed fighters battling Syrian President Bashar al-Assad, not Islamic State.

Speaking in Turkey at the same time as Hollande, Obama called Friday’s attacks a “terrible and sickening setback,” but maintained that the U.S.-led coalition was making progress.

“Even as we grieve with our French friends … we can’t lose sight that there has been progress,” Obama said at a Group of 20 [G20] summit, ruling out sending in ground troops.

U.S. Secretary of State John Kerry arrived in Paris late on Monday to pay respects to those killed in the attacks and stress Washington’s support for the toughened French stance. He is due to meet Hollande on Tuesday morning.

Much of France came to a standstill at midday for a minute’s silence to remember the dead, many of whom were young people killed as they enjoyed a night out. Metro trains stopped, pedestrians paused on pavements and office workers stood at their desks.

But in a sign of life slowly returning to normal, schools and museums re-opened after a 48-hour shutdown, as did the Eiffel Tower, which lit up the night sky in the red, white and blue colors of the French flag following two days of darkness.

Investigators have identified [an Islamic radical] Belgian national living in Syria as the possible mastermind behind the attacks, which targeted bars, restaurants, a concert hall and soccer stadium.

“Friday’s act of war was decided upon and planned in Syria, prepared and organized in Belgium and carried out on our territory with the complicity of French citizens,” said Hollande.

Prosecutors have identified five of the seven dead assailants – four Frenchmen and a [Syrian] fingerprinted in Greece last month. His role in the carnage has fuelled speculation that Islamic State took advantage of a recent wave of refugees fleeing Syria to slip militants into Europe.

Police believe one attacker is on the run, and suspect at least four people helped organize the mayhem.

“We know that more attacks are being prepared, not just against France but also against other European countries,” French Prime Minister Manuel Valls told RTL Radio. “We are going to live with this terrorist threat for a long time.”

Islamic State warned in a video on Monday that any country hitting it would suffer the same fate as Paris, promising specifically to target Washington.

“Let this be clear to everyone, this is just the beginning, these actions are going to continue,” he said.

Hollande said he would create 5,000 jobs in the security forces, boost prison service staff by 2,500 and avoid cuts to defense spending before 2019. He acknowledged this would break EU budget rules, but said national security was more important.

He also said he would ask parliament to extend for three months a state of emergency he declared on Friday, which gives security forces sweeping powers to search and detain suspects.

A source close to the investigation said Belgian national Abdelhamid Abaaoud, currently in Syria, was suspected of having ordered the Paris operation. “He appears to be the brains behind several planned attacks in Europe,” the source told Reuters.

RTL Radio said Abaaoud was a 27-year-old from the Brussels district of Molenbeek, home to many Muslim immigrants and a focal point for Islamist radicalism in recent years. Police in Brussels have detained two suspects and are hunting Salah Abdeslam, a 26-year-old Frenchman based in Belgium. One of his brother’s died in the Paris assault, while a third brother was arrested at the weekend but later released.

Police in France named two of the French attackers as Ismael Omar Mostefai, 29, from Chartres, southwest of Paris, and Samy Amimour, 28, from the Paris suburb of Drancy.

France believes Mostefai, a petty criminal who never served time in jail, visited Syria in 2013-2014. His [Islamic] radicalization underlined the trouble police face trying to capture an elusive enemy raised in its own cities.

“He was a normal man,” said Christophe, his neighbor in Chartres. “Nothing made you think he would turn violent.”

Latest official figures estimate that 520 [Muslim] French nationals are in the Syrian and Iraqi war zones, including 116 women. Some 137 have died in the fighting, 250 have returned home and around 700 have plans to travel to join the jihadist factions.

The man stopped in Greece in October was carrying a Syrian passport in the name of Ahmad Al Mohammad. Police said they were still checking to see if the document was authentic, but said the dead man’s fingerprints matched those on record in Greece.

Greek officials said the passport holder had crossed from Turkey to the Greek islands last month and then registered for asylum in Serbia before heading north, following a route taken by hundreds of thousands of asylum seekers this year.

His role in the mission has re-ignited a fierce debate in Europe about how to tackle a continuing influx of refugees, with anti-immigrant parties calling for borders to be closed against the flood of newcomers fleeing the Middle East.

Meanwhile climate change activists met in Paris on Monday and reaffirmed their determination to hold a demonstration in the city on Nov. 29, the day before a U.N. summit aimed at reducing global greenhouse gas emissions.

Organizers of the march expressed sympathy for the victims of Friday’s attacks, but said the goals of the climate movement were synonymous with opposition to violence and terror. However, the green groups require permission to assemble from French authorities, who have signalled concerns about being able to guarantee safety. The two sides will meet on Tuesday for talks.

1. For each of the 3 countries – FRANCE, SYRIA AND BELGIUM – give the following information:

Find the answers at the CIA World FactBook website.  NOTE: If WorldFactBook appears outdated for any country, use Wikipedia.

NOTE to students: Before answering the questions below, read the information under “Background” and watch the news reports under “Resources.”

3. When addressing parliament on Monday, what actions did President Francois Hollande say he would take in response to the Islamic terrorist attacks in Paris on Friday? Be specific.

4. How did Parliament respond to President Hollande’s speech?

5. a) What specific reason did Islamic State terrorists give for their murderous attack on so many innocent people in Paris?
b) What additional threat did they make?

7. In what countries did the terrorists involved in the attack in Paris plot their scheme?

8. What warnings did French Prime Minister Manuel Valls and French Interior Minister Bernard Cazeneuve give when talking to reporters?

9. In response to the murder of over 120 people on Friday night in Paris, President Holland has already ordered massive airstrikes on ISIS strongholds in Syria and launched raids on suspected terrorist hideouts in France. He immediately closed the borders and he also ordered a state of emergency which he is asking parliament to extend for 3 months. What do you think about this response? Too strong? Not strong enough? The appropriate response? Explain your answer.

10. On Thursday, the day before the attacks, President Obama declared in an interview that ISIS had been “contained,” asserting that the terror cell had been stalled in Iraq and Syria. The Islamic State is threatening similar attacks to those in Paris in the U.S. and around the world.
What steps do you think President Obama should take to ensure the safety of the American people here in the U.S.?

The Syrian city of Raqqa serves as the self-proclaimed capital of ISIS.  France has launched airstrikes on the Raqqa following deadly attacks in Paris: For news reports on the latest from France, visit France24.com and Reuters.