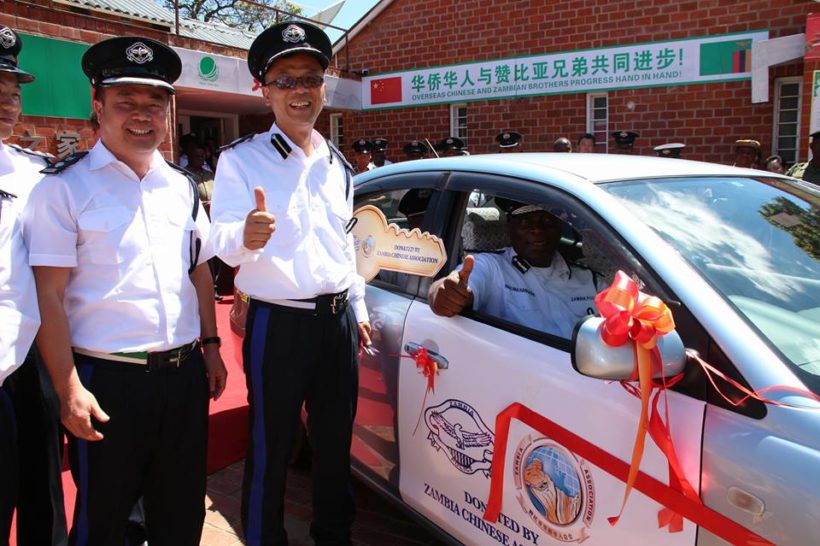 The Chinese police officers were commissioned on Dec. 18, 2017.

Special Note:
Due to illness, posting may be delayed or sporadic for the next week or so.  Please bear with us until we are able to resume our regular posting schedule.

The new reservists were commissioned in the capital, Lusaka, on Monday (Dec. 18).

But the decision prompted widespread anger, especially in light of a ruling taken earlier this year that bans police officers from marrying foreigners for “security reasons.”

Not even Zambians with dual-nationality are allowed to join the police.

Dickson Jere, a lawyer and former presidential spokesman, said the constitution was clear on the matter.

He told the BBC’s Focus on Africa radio programme that the entire incident was an “insult” – to others in the police, but also other Zambians.

“When we see a uniform of the police, it signifies our identity. It signifies our sovereignty,” Mr Jere said. “How would we be feeling to see a police officer and be saluting a Chinese [national] in our own country?”

The appointment of the Chinese reservists had left many other people scratching their heads particularly as the government had previously removed other nationals from the security services, journalist Kennedy Gondwe reports from Lusaka. That move had been prompted because there was a feeling that foreigners were infiltrating, he says.

Suspicions over the recent recruitment were bolstered by distrust towards the Chinese community in Zambia, which was estimated to number about 20,000 in 2015, according to the privately owned Lusaka Times.

But the part-time officers are not thought to be have been going to perform any special role liaising with Zambia’s Chinese community.

“We had Indians who were police reserves and people were OK with it. Why should the Chinese be discriminated on race?” the Lusaka Times quoted her as saying.

But the police have since backed down from their position – with the caveat the officers’ appointment broke no laws.

[According to Kenyan newspaper The Daily Nation, The Chinese nationals had donated two vehicles to the government the week before the commissions. Also China has invested heavily in Zambia’s copper mines and other sectors like hospitality and construction.]

1. For ZAMBIA, give the following information:

2. For ZAMBIA:
a) list the who, what, where and when of the news item
b) Why did officials scrap the program?
c) Define national.
d) For what reasons did Zambians oppose employing Chinese nationals living in Zambia? Be specific.
e) Why had the government previously removed other nationals from the Zambian security services?
f) Read the “Background” below the questions and watch the news report under “Resources.” Do you think the government’s motive for hiring the Chinese nationals was economic? Explain your answer.
g) Based on the facts, were Zambian citizens right to oppose the commissioning of Chinese nationals into the police force? Explain your answer.

In 1998 China’s Non-Ferrous Metals Corporation (CNMC) bought a controlling 85 percent stake in Zambia’s Chambishi copper mine for $20 million and invested a further $130 million in rehabilitating the mine. Less than ten years later by the end of 2005 roughly 160 Chinese companies had invested in Zambia.

Trade between China and Zambia increased in 2010 to $2.2 billion. Chinese investments in Zambia range from mining interests in Zambia’s copper belt to investments in agriculture, manufacturing, and tourism. As of February 2011 a total of 25 farms in Zambia were run by Chinese entities.

From 2000 to 2011, there are approximately 64 Chinese official development finance projects identified in Zambia through various media reports. These projects range from a loan to fund Kafue George Lower power project, to a loan for expanding the Kariba North bank power station near Siavonga, or a $211 million USD debt relief in 2006.

Fifty-one employees at a Chinese-owned explosives plant were killed in an explosion in April 2005. The following year a riot broke out at the Chambishi mine. The next day a Zambian worker was shot and wounded leading to the storming of the Chinese residential compound and another five workers were shot and wounded by a panicked Chinese manager. The explosion at the explosives plant and the events at Chambishi mine became one of biggest issues in the 2006 Zambian presidential elections. With opposition candidate, Michael Sata, taking an anti-China stance, stating that were he to win the election, he would renounce Zambia’s recognition of the PRC (People’s Republic of China) and recognize the Republic of China in Taiwan. Sata lost the election to incumbent Levy Mwanawasa. (from wikipedia)