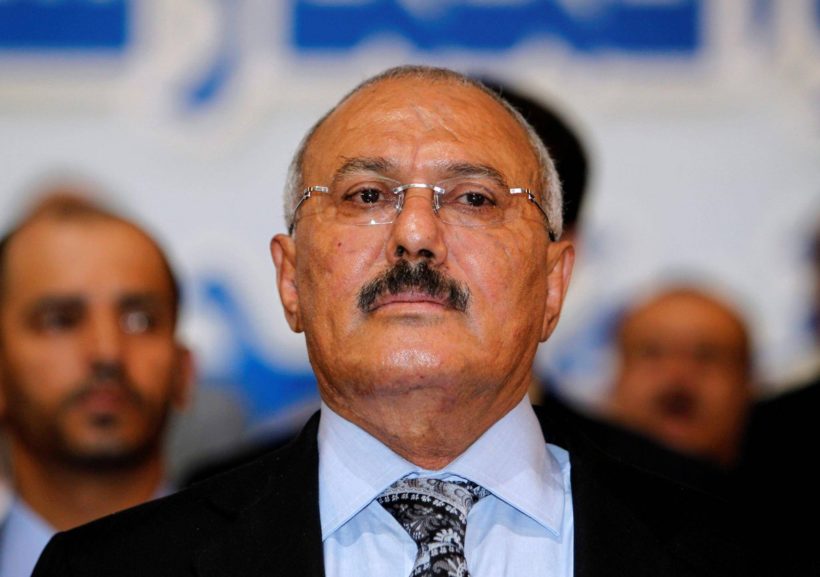 Mr. Saleh held power for 33 years until he was ousted in 2011 but he remained a central figure in the country and spent two years battling alongside the (Shiite Muslim) Houthi rebels (who are backed by Iran) against (Sunni Muslim) Saudi Arabia and the man who replaced him as Yemen’s president.

The alliance between Mr. Saleh and the Houthis collapsed last week and he began to make public overtures towards Saudi Arabia as his troops fought the Houthis in street battles in Saana, the rebel-held capital.

The 75-year-old former president was reportedly shot as he tried to flee the city and Houthi fighters joyfully paraded his bloody corpse before the cameras, much as Libyan rebels did after killing Muammar Gaddafi in 2011.

Abdul-Malek al-Houthi, the Houthi leader, said Mr. Saleh had been killed for “treason” and warned the Saudi-led coalition they would not succeed in Yemen. “Today is the day of the fall of the conspiracy of betrayal and treason. It’s a dark day for the forces of the coalition,” he said.

His death is a blow for Saudi Arabia and its UAE allies, who had reportedly wooed Mr. Saleh through his son in the hope of bringing an end to the war, which has so far been a frustrating stalemate for Saudi crown prince Mohammed bin Salman.

More than two years of fighting has killed more than 10,000 people, destroyed the country’s infrastructure and left another seven million people on the brink of starvation. Saudi Arabia has been heavily criticized for killing civilians in airstrikes and for its tight blockade of the country. It accuses Iran of arming the Houthis and supplying the rebels with missiles which they have fired into Saudi territory.

The Red Cross and other humanitarian groups said their operations in Sanaa had been paralyzed by the fighting and by heavy Saudi bombardment against the Houthis, prompting the UN to appeal for a ceasefire.

Mr. Saleh had been one of the Arab world’s wiliest and longest-reigning dictators and once described his more three decades in power as like “dancing on the heads of snakes.”

He was part of a young group of military officers who seized power in North Yemen in 1962 and then became the country’s president in 1978. In 1990 North and South were reunited and Mr Saleh became the ruler of the entire country.

He was forced from power in late 2011 after mass protests inspired by the Arab Spring and only narrowly survived an assassination attempt. He handed power to Abdrabbuh Mansur Hadi, his vice president.

But when Houthi forces rose up against Mr. Hadi in 2015, Mr Saleh and his loyalists joined with them and seized control of much of North Yemen. Soon after Saudi Arabia began air raids against the Houthis in support of Mr Hadi.

Tensions between Mr Saleh and the Houthis had been growing since the summer and in a speech on Saturday he forcefully denounced his one time allies and said he was ready to “turn a new page” with Saudi Arabia and Mr Hadi.

His gamble backfired badly as Houthi forces overran his fighters in Sanaa over the weekend. He was reportedly trying to flee the city when his armoured vehicle was struck by an RPG (rocket-propelled grenade). Houthi fighters then allegedly killed him on the side of the road.

Mr Hadi appealed to Mr Saleh’s followers to join him against the Houthis and said he was ordering an offensive against Sanaa.

Residents of the city said the fighting appeared to be calming on Monday night as news of Mr Saleh’s death spread. “We are just waiting in the house expecting something bad to happen. For three days we have been at home because of street fighting,” said Najla al-Sonboli, a doctor.

The Red Cross said one of its medical warehouses had been hit during the fighting but it had been unable to check the extent of the damage because of the chaos in the city. A spokeswoman said the group had been unable to deliver supplies to hospitals and that at least 125 people had been killed.

Jamie McGoldrick the UN humanitarian coordinator for Yemen, appealed for a ceasefire so humanitarian aid could be delivered. “The streets of Sanaa city have become battlegrounds and people are trapped in their homes, unable to move out in search of safety and medical care and to access basic supplies such as food, fuel and safe water,” he said.

1. For YEMEN, give the following information:

Read a 2015 backgrounder “Who are the Houthi Rebels?”

For background on Yemen, go to the U.S. State Department website at state.gov.

Interesting note: The reputed home of the Queen of Sheba, Yemen has been at the crossroads of Africa, the Middle East and Asia for thousands of years thanks to its position on the ancient spice routes.